Could a gas cartel become as powerful as OPEC? 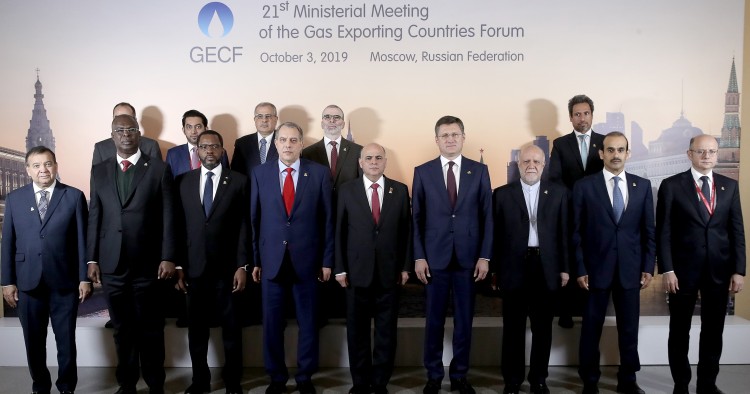 The 12-country Gas Exporting Countries Forum (GECF), which held its latest meeting in Equatorial Guinea on Nov. 28, has never had OPEC’s ability to control energy prices, but that is likely to change as liquefied natural gas (LNG) transforms the gas market from a regional to a global one.

Based in Doha and led by Russia, Qatar, and Iran, GECF was founded in 2001, five decades after OPEC’s launch in 1960. A key reason that it has been unable to control gas prices is that it lacks OPEC’s production-quota provisions, which the oil cartel uses to push up prices by holding some output off the market. Instead, GECF members try to affect gas prices by coordinating their policies.

But an evolving gas-market and geopolitical landscape means GECF has the potential to develop into an energy cartel with OPEC’s clout. GECF leader Russia is brimming with confidence after playing a key role in the success of OPEC+ in raising global oil prices, and a former Russian deputy energy minister, Yury Sentyurin, is now chairing the organization.

How gas can go global

Before GECF can control gas prices, the market must first become international. The main way to ship gas has always been through pipelines, which has limited its ability to become an internationally traded commodity. But thanks to growing production in the United States, Qatar, Australia, and elsewhere, LNG now accounts for 11 percent of world production, and that figure is growing.

With no global gas market, the price of gas was once linked to the price of oil, which did have an international market. But that is changing, too. Thirty-four percent of LNG is now traded on spot markets, where prices are not linked to those of oil.

A surge in terminals and tankers has prompted the top LNG players to increase production — so much so that the world is now seeing a natural gas glut. A telling figure is that LNG trade jumped 10 percent between 2017 and 2018, reaching a total of 316.5 million metric tons a year, just under a third of which — 99 million metric tons — is non-long-term trade. Most of the increase came from the commissioning of new LNG terminals in the United States and Australia.

Russia, the world’s largest gas exporter, has also ramped up its LNG exports, thanks to the commissioning of its Yamal LNG project. Novatek, which operates Yamal LNG, will add 20 million metric tons of export capacity a year with a second terminal, Arctic LNG 2. Meanwhile, Qatar says it will boost its production from its current level of 77 million metric tons a year to 126 million metric tons within five years, a substantial addition to an over-supplied market.

While traditional suppliers are adding capacity to protect their market share, Africa is showing signs of becoming a growing force in the industry as well. Starting in the north of the continent, Egypt is one of the world’s fastest-growing natural gas exporters. It is pumping from its offshore Zohr field and has discovered gas in its Nour North Sinai Concession, putting it in a position to become a hub for the commodity. In a stroke of fortune, Egypt has two idle LNG import terminals, Idku and Damietta, that can be turned into export facilities

But producers further south are also ramping up output as well. Nigeria, the continent’s largest LNG producer, is expanding its Bonny Island LNG terminal to handle 30 millions tons a year — a nearly 50 percent jump from the current 22 million tons. Mozambique will become a factor in the international market as well when it opens a $20 billion LNG facility in 2024.

Today’s abundance of natural gas could lead to integration of the market, with the big players becoming even more powerful. The continuing surge in LNG capacity is also likely to accelerate the process of delinking gas and oil prices. These developments could prompt producers whose economies are largely or totally dependent on gas to take steps to control global prices. GECF certainly has the clout to pull it off: Its members control 70 percent of the world’s gas reserves.

GECF will have to overcome some significant challenges to reach the lofty perch that OPEC enjoys and to have anything like its price-setting power, however. One is that two huge gas exporters, the United States and Australia, are not GECF members and are unlikely to join. Another is that three forum members — Russia, Iran, and Venezuela — are struggling with U.S. economic sanctions that are unlikely to end anytime soon.

If GECF can overcome these issues and become a price-setting force in the gas market, the biggest winner is likely to be Russia. Its role in OPEC+ has already made it a global force in setting oil prices, along with OPEC leader Saudi Arabia. If GECF adds a gas price-control mechanism, Russia could assume an almost unrivaled role in international energy geopolitics. For the GCC petrostates, whose economies are heavily dependent on oil and gas revenues, this could mean further reliance on Russia to protect themselves from possible price shocks.