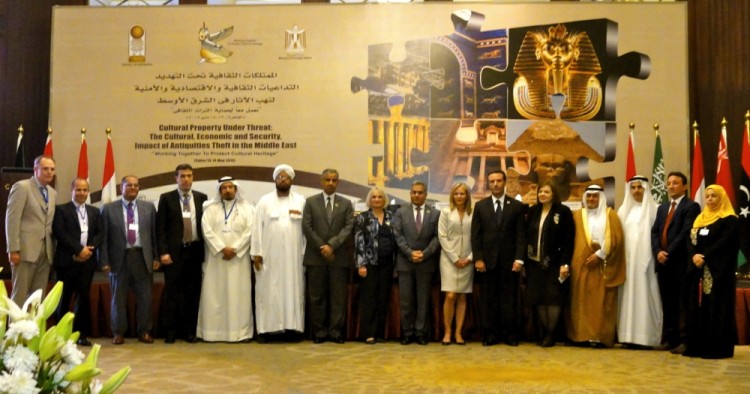 CAIRO, May 14, 2015 – Ten nations from across the Middle East agreed today to take cooperative and ongoing steps to stop the looting and worldwide trafficking of illicit antiquities, a practice that funds terrorism and is annihilating the region’s cultural heritage. The Ministers condemned this activity as a crime against humanity.

Egypt’s Minister of Antiquities Mamdouh Eldamaty announced the Cairo Declaration [PDF] at the end of an emergency ministerial summit, Culture Under Threat: The Security, Economic and Cultural Impact of Antiquities Theft in the Middle East. Ten nations, the Director General of UNESCO, the Head of the Arab League, UN agencies, and ambassadors, as well as experts in counterterrorism, terrorist financing, foreign affairs, heritage law and archaeology, gathered under the auspices of the Egyptian ministries of foreign affairs and antiquities. The meeting was organized and co-hosted by the Antiquities Coalition and The Middle East Institute, Washington, DC-based non-governmental organizations.

The countries agreed there is a crisis that requires immediate response, emphasizing the linkage between antiquities looting and terrorist finance. They recognized the need for an awareness campaign to stop the purchase of “blood antiquities,” which funds ISIS, amongst other extremist groups, and their strategies of terror. The Cairo Declaration outlines a regional action plan that the countries will take together, including:

“The Middle East and Northern Africa region is home to the beginnings of human civilization,” notes the Declaration. “Criminal networks and terrorist groups have systematically looted historic sites and profited from the sales of these antiquities in international black markets. In addition, as a means to intimidate local populations, these looters have intentionally destroyed historic relics.”

“We are in a race to preserve more than just relics,” said Wendy J. Chamberlin, president of The Middle East Institute and one of the conference chairs. “The nations gathered here today are redoubling their commitments to cooperatively slow and stop cultural annihilation, stop terrorist funding and enhance stability across the Middle East.”

“Anyone who buys a stolen Middle East artifact should know that they may be personally funding terrorists’ wanton killings,” said conference leader Deborah Lehr, founder and chair of the Antiquities Coalition. “And there’s a doubly cruel twist: some of the same groups that are trafficking in and profiting from the sale of antiquities are using those dollars to destroy other invaluable records of human history. This is the first time countries in the region have come together to take action in the fight against antiquities looting and terrorist activity.”

The Antiquities Coalition and The Middle East Institute will continue to support the Task Force and these individual governments in the fight against blood antiquities.