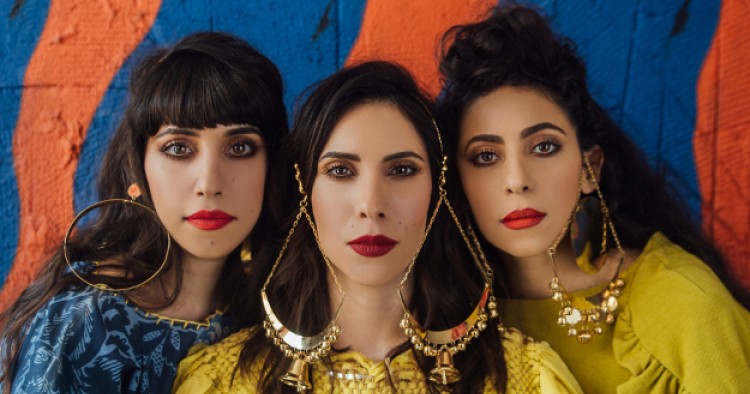 Yemenite pop music has seen a resurgence. The band A-Wa (pronounced “ai-wah,” informal Arabic for “yes!”) and their infectious blend of Yemenite folk, electronic, and hip-hop music can be heard all over the world—from Cairo taxi cabs to Dubai pool parties and Parisian nightclubs. The band, whose mission is to elevate Yemenite music on the international stage, is composed of three Israeli sisters of Yemenite heritage.

In 2015, A-Wa’s single Habib Galbi became the first Arabic-language song to top the Israeli music charts. The original Yemenite tune was taught to the three sisters—Tair, Liron, and Tagel Haim— by their paternal grandmother, who came to Israel from Ibb, Yemen, via Operation Magic Carpet shortly after Israel declared independence in 1948.

After a show in June in Washington, Liron excitedly told me, “Last night, we met two Yemenite sisters who said they felt like they were back at home when they listened to our songs.” A-Wa’s ability to connect with members of the Arabic community shows music’s power as a medium to bridge divides, and also represents a major thread of Mizrahi Jews, the label for Jews of Middle Eastern origin. “Our grandparents brought the Yemenite groove with them when they came to Israel. We remember as little girls visiting the Yemenite community they lived in, and we were drawn to all the different music and sounds. It went deep into our hearts,” Tair said.

Despite A-Wa’s Yemenite roots, the band’s positive reception across the Arab world was never guaranteed. Israeli musicians who have tried to engage with Arab populations have faced hurdles due to larger political dynamics. For example, in 2005, Qatar decided to cancel an entire five-day music festival after it received negative media pressure for inviting Israeli pianist Daniel Barenboim as a performer.

But a few artists have succeeded in reaching Arab listeners. Dana International, the Israeli transgender pop star best known for winning the 1998 Eurovision Song Contest, gained popularity in Egypt and Jordan. Zehava Ben, an Israeli singer of Moroccan heritage, offers an even more relevant example since she sings in Arabic. Despite boycotts of Israeli performers, Zehava is popular across the Arab world, particularly for her cover of the famous Egyptian singer Oum Kalthoum’s classic, Enta Omri.

However, A-Wa has been most influenced by Ofra Haza, an Israeli pop singer who explored her Yemenite heritage in the 1970s and 1980s, and went on to achieve stardom in both Israel and the Arab world. Haza emphasized her roots in her 1984 album “Songs of Yemen,” which included well-known Yemenite songs. Her hits, notably Galbi, made Yemenite tunes more accessible to an international audience. She even planned a goodwill trip to Yemen in 1995, but it was cancelled a month prior to the show due to a diplomatic fallout caused by a media dispute.

The Haim sisters are most excited, though, about their positive reception in Israel. The early waves of Mizrahi immigrants were encouraged, and at times pressured, to assimilate into Israeli society by speaking Hebrew, and adopting the dominant traditions of the more influential Ashkenazis—the Jewish diaspora population originating from Central and Eastern Europe. Their grandmother stopped speaking Arabic altogether. The second generation, which included the Haim sisters’ father, also “wanted to blend in” and keep a cautious distance from Yemenite culture. Yet the Haim sisters are ecstatic that their music is helping to make Yemenite tradition “cool again” in Israel.

“Our grandmother is proud and has been encouraged to start speaking Arabic again,” Tagel, the youngest sister, explained. “As little girls, we were curious about the world our grandma came from. We want to respect her culture, but also bring our own sound.”

Tair added, “We don’t do what we do only to focus on the tradition. We want to bring something new to that. Tradition is meant to...”

Liron jumped in to finish her older sister’s sentence, “To not stay as it is.”

A-Wa pushes the tradition of Yemenite folk music in multiple ways. Israel’s Yemenite Shirat Nashim, or girl’s songs, focus on everyday life, and topics such as love and loss. A-Wa’s hit Habib Galbi (Love Of My Heart), for example, and other songs from their first album, including Lau Ma Al Makhaba (If Not for Love), and Galbi Haway (My Heart Is Lost In Love), use synthesizers and catchy ska guitar riffs to explore these themes.

But in Yemenite music, it has traditionally been men who sing about God and other religious concepts, so A-Wa has definitely challenged convention. In the band’s song Ala Wabda (I Will Begin By Calling You), the singers invoke the heavens directly: “I will begin by calling you, oh God / The great Almighty / Oh, king of kings / Who has no bounds.”

Though fame can often tear bands apart, A-Wa is thrilled that the success of their first album has endorsed their sound. The sisters have become even closer since banding together. Between songs at their Washington concert, Tair prompted her sisters to drink more water. They are excited to have discovered more of their grandmother’s stories, which will be included in their sophomore album coming out early next year.

“This has all been a dream. As little girls, we went out into the [Araba] desert [in southern Israel] and imagined we were performing in front of thousands of people. There were no limits,” Tair concluded. “Just like the desert, everything was open.”