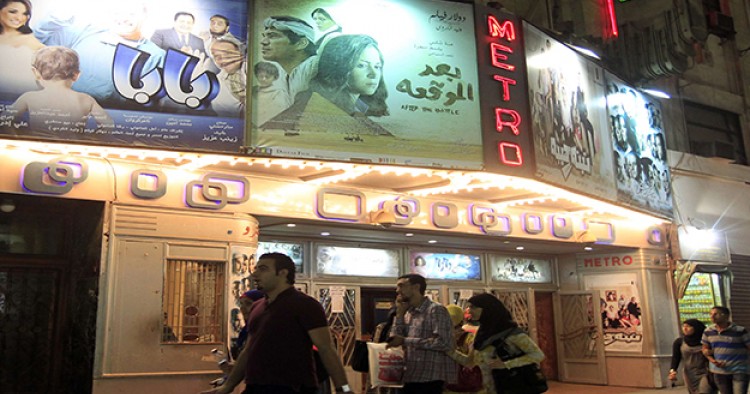 The cinema has long been a contested space in Egypt. Following its nationalization in 1966, a formerly flourishing film industry ran steadily downhill and movie theater operators were subjected to censors’ increasingly puerile whims. The only independent company allowed to operate was Misr International Films—founded in 1972 by Egyptian director Youssef Chahine (1926-2008)—to produce, distribute, and exhibit films while coincidentally enabling the state to posit itself as an indulgent patron of cinematic art. The annual state-run Cairo International Film Festival (CIFF, est. 1976) offered the sole opportunity for the greater public to view foreign films, albeit randomly selected ones of often questionable quality. In the early 1980s, movie theaters were granted permits for foreign films so infrequently that audiences greeted the local debut of Raiders of the Lost Ark, at Cairo’s then-glorious Cinema Metro, with the near-riotous enthusiasm of a championship soccer match.

Until the mid- 1990s Downtown Cairo hosted large and splendid movie theaters, which by then offered a steady stream of commercially rewarding blockbusters alongside standard Egyptian comedies and melodramas. Filmgoers crowded the sidewalks, spilling into the streets. That all changed as shopping malls multiplied, spawning cineplexes. The rationale to entice audiences with greater proximity (expanding to more neighborhoods) and wider film variety was defeated by the limited available content in Egypt whether domestically, regionally, or internationally produced. While a handful of filmmaker/entrepreneurs used political connections to facilitate feature film projects in the early 2000s, lifting production values from previously abysmal standards, they adhered to commercial formats almost without exception. Between censorship, customs duties and delays, rental fees, and marketing concerns theater operators rarely ventured beyond the mainstream. Here, as elsewhere, higher ticket prices coupled with the onslaught of pirated DVDs and downloads drastically reduced audiences.

Then came 2011 and the subsequent state backlash; a clampdown on civil society that might have defeated, but instead redoubled, the efforts of young artists and activists to work within the cracks of the system to further the cause of creative expression. Digital technology had, meanwhile, placed the means of production in the hands of a new generation of filmmakers who defied conventions to generate original narratives, while confronting a dearth of screening venues and distribution possibilities. These shortcomings are being addressed by coordinated independent projects designed to acquaint local audiences with a regional cinematic culture of previously unexplored breadth and historical depth.

Cairo’s first alternative movie house, Zawya (‘angle’), opened in March 2014, occupying a 175-seat second-floor theater in downtown’s Cinema Odeon. Equipped with a separate entrance and lobby café, Zawya presents semi-commercial documentary and fiction films from the MENA region, charging 35 per ticket (as compares with 75 in some cineplexes). Advertising solely on social media, it attracted a first year attendance of 25,000 that nearly doubled the following year. The first two months of 2017 exceeded 20,000 and reflected the local appetite for diversity, particularly on behalf of young filmgoers.[1]

Zawya benefits from the resources of its mother company, Misr International Films, which initiated an annual Cairo festival in 2007 called the Panorama of European Film, and whose curation Zawya’s team has taken in hand and expanded to include other cities. Films designated for festivals suffer fewer bureaucratic constraints and the ‘festival status’ Zawya inherited enhanced its access to foreign content while enabling the start of similar endeavors. In Tanta, Alexandria, Port Said, and Ismailia, young cinephiles partnered with Zawya to share films and are following its lead in revitalizing failing movie theaters with fresh programming and new audiences.

According to Zawya’s 27-year-old managing director, Youssef Shazli, “we didn’t do anything new, we just catered to a need that was already there.”[2] The most pressing need is distribution. Non-commercial films are typically shown in one-off, isolated circumstances at community or foreign cultural centers. Now acting as distributor for a selection of independent Egyptian filmmakers, Zawya and its affiliates host multiple screenings, market films to regional TV and VOD (video-on-demand) platforms, and secure screenings in foreign festivals. These have proved far more receptive and consequential than Egypt’s haphazardly organized state-run festivals, which tend to be lacking in professionalism, transparency, and artistic scope.

The experience of Tamer el-Said illustrates how independent filmmakers are pursuing careers while fostering alternative cinema. Having authored several shorts and documentaries, Said embarked on his first feature film in 2008—In the Last Days of the City (2016) —working closely with Khalid Abdullah, an Egyptian-British actor who plays the film’s protagonist. An elegiac yet unsentimental portrayal of Cairo in the months preceding the 2011 uprising, Said’s film transcends its Cairene context. Through glimpses of the lives of the protagonist’s friends in Baghdad and Beirut, Last Days underlines the paradoxical tenacity and vulnerability of the region’s urban realities. Variety called it “a natural fest item, with chances for targeted art house play.” The film in fact premiered at the 2016 Berlinale and was screened in some 70 festivals worldwide.

It was denied release in Egypt, however, notably by the Cairo International Film Festival with the counterintuitive excuse that it had already been shown too much, and was therefore unsuitable for CIFF’s audience. Said’s unblinking depiction of Cairo in all its derelict glory is a more likely reason for authorities withholding the film (locally distributed by Zawya) from Egyptian theaters. But a funny thing happened on the way to rejection. In 2008, Said and Abdullah established Zero Productions to make Last Days a minimalist studio in a sixth floor flat in Downtown Cairo. Filmmaker friends came to borrow equipment, share ideas, and laments. The outcome of Said and Abdullah’s experience is Cimatheque, a meticulously conceived venue for film exhibition and the advancement of filmic culture that opened in 2015.

Designed by and for filmmakers and film-lovers (occupying two flats in the building where Zero Productions was started), Cimatheque includes an editing suite, a 16mm and 35mm camera, film development equipment, a scanner for digitizing analog film and video, an archive, and an acoustically perfect screening room (capacity 70) with multi-format projection capabilities. Rather than producing films, Cimatheque facilitates production through the affordable availability of both equipment and in-depth workshops. Exploring varied aspects of filmmaking, these training sessions are led by likeminded entities, including Atelier Varan, whose hands-on methodologies for producing low-budget documentaries empower directors around the developing world.

Funded by a combination of independent sources and income-generating activities, Cimatheque’s intent—according to Iraqi-French filmmaker and co-founder Hana al-Bayati—was initially “to support the development of a diversity of narratives and create a space where these could be discussed.” To build awareness of existing narratives, Cimatheque’s program offers an array of historic/archival and contemporary films, “things rarely seen” in the words of al-Bayati.[3] Films are sourced locally and internationally, whether from filmmakers, distribution companies, or institutions like the French Cultural Center and the Goethe Institute. Cimatheque also accesses material through its membership in the Network of Arab Art House Screens (NAAS), a group of representatives from twelve Arab countries devoted to building audiences for non-commercial films region-wide.

Program Curator and NYU Film School graduate, Yasmin Dessouki, says Cimatheque “stresses openness, flexibility, proper contextualization” in its screening choices, “to convey a sense of storytelling, establish links between different subjects or formats people wouldn’t normally consider, and most of all, create a community for the city’s film lovers.”[4] Recognizing that a film scene needs critics to offer interpretations and provoke dialogue to promote the form and its practitioners, Cimatheque took action. Once the purview of multi-lingual local journals, Egyptian film criticism has declined along with the availability of works to critique and the relative absence of an independent press whose function—in Egypt—has been lately restored by the internet. Through dedicated workshops and its biannual Arabic publication, Kurrasat (‘notebooks’), Cimatheque assists the formation of a new generation of film writers.

Partnering with Architect Omar Nagati—co-founder of Downtown’s Cairo Lab for Urban Studies, Training, and Environmental Research (CLUSTER) —Tamer Said was exacting in his vision for transforming a residential flat into a film center. From the stripped-down natural woodwork of its high-ceiling meeting and work rooms with windows framing the tangled city, to the comfort and quality of its screening theater and the elegant pamphlets with concise bilingual texts describing thematic monthly programs that are available in the lobby, everything about Cimatheque reflects a mise en valeur of film as an art form.

Working together, Cimatheque, NAAS, and Zawya recently organized a symposium involving participants from cities throughout Egypt to establish more screening venues. A Zawya-curated festival, Cairo Cinema Days, ran from May 9-16 in Port Said, Ismalia and Alexandria featuring Arab and European feature and short films. Thanks to these interactions and interventions, a largely young and growing Egyptian audience is partaking in the creation of a cultural space of far-reaching significance despite the state’s efforts to the contrary. The motivation for the founders of these projects, as expressed by Omar Nagati, is “to work subversively to make small reforms - this is pragmatic and tactical - you have to have a bigger vision but within it you act step by step, partnering with other groups to expand your scope and find new spheres of influence.”[5] Egypt’s emerging film scene is proof that an adversarial state has unwittingly provoked the coalescence of a resilient, resourceful community of artists and arts advocates determined to share their visions.