A coup or not? What happened in Tunisia and what comes next? 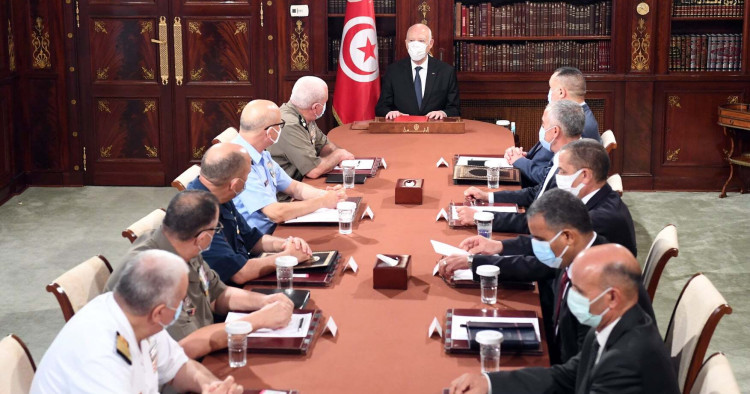 On July 25, Tunisian President Kais Saied announced measures that launched Tunisia into yet greater uncertainty. He sacked the embattled prime minister and suspended the legislative branch. Since, the debate over whether his actions constitute a coup or not has captured the attention of Tunisians and international observers. While the designation of a coup carries legal significance in Washington due to legislation restricting U.S. aid for governments that come to power via a military coup d’état or decree, Saied’s actions may or may not fit this description, nor do they resemble other cases where the U.S. government has applied this restriction. European Union aid policies might also be affected by an assessment of whether Saied’s actions threaten democracy, though this could take time to play out. But the debate over the determination of what Saied did, while important because of the legal and political implications, obscures the way in which his actions are themselves an indication of how Tunisian democracy has not been working for Tunisians. And what Saied did is, in the short term, unlikely to yield the results Tunisia needs.

The debate about a coup designation touches on two parallel concerns. From the perspective of Washington, the worry about a coup stem from the desire to safeguard Tunisia’s democracy. Inside Tunisia, the heart of the debate is a desire to fix what went wrong and conceptualize a new path forward. The hard reality is that despite every sacrifice Tunisians believe they have made, despite their sustained dedication to the ideals and principles of democracy, including a progressive constitution, free and fair elections, and a remarkably free press, democracy has failed to deliver. Most Tunisians look at their country and see a corrupt and ineffectual political class and a hopeless economy, with the pandemic causing suffering unprecedented since the 2011 revolution.

For Tunisians this question — whether the country experienced a coup — wades into the thorny issue of who gets to speak for or on behalf of Tunisians, and to what extent international entities should influence its domestic affairs. Tunisian commentators have evoked anti-colonial sentiment and condemned neo-imperialism. Many Tunisians felt the initial conversation was dominated by Western voices and were disturbed at what they viewed as Washington commentators’ failure to grasp the extent of the suffering from the country’s cascading crises. They bristled at the assertion that Tunisia’s democracy would not be protected with conviction. Tunisia has been supported by the West, and Western perspectives have a value added. Washington is justified in taking an interest in developments in the country, given the level of assistance provided to myriad sectors. Certainly, actors and commentators have a duty of care, but what is happening in the country demands international attention and debate.

Justified as some Tunisians believe, or illegal as others assert, Saied’s actions themselves do not change the fact that Tunisia was not a politically healthy state before July 25. Tunisians had largely already lost faith in the whole political edifice. The country’s political actors had failed to find a way to work together since 2019, and political and economic interests were becoming entrenched, and corruption worsened, as the population struggled with austerity measures and the rising cost of living. The pandemic compounded the economic and political woes, especially when the country needed effective leadership and governance. Tunisia’s Muslim democratic party, Ennahda, the largest bloc in parliament, still viewed with suspicion by its opponents, initially supported Saied following his election in late 2019. But it developed an adversarial relationship with him as Saied blocked the formation of non-technocratic governments for over a year, ostensibly over corruption issues, and Ennahda-backed interim governments flailed in dealing with the pandemic and the economic crisis.

As the latest wave of COVID-19 infections rose sharply, calls for Saied to act unilaterally in the face of the political impasse and governance failures increased. He did so in the same populist manner that brought him to office in 2019. In the immediate aftermath, large crowds came out to the street in support of his announcement of a complete, if temporary, takeover of the executive and suspension of legislative functions, signaling the extent to which the cumulative pressure of years of poor economic performance coupled with the health crisis created a sympathetic context for Saied’s overreach. Yet, Saied’s powerbase and support will likely only be as strong as the results he can deliver — and it is not clear how he, alone, can bring immediate relief.

Indeed, Saied’s focus since July 25 has been on the question of corruption, removing constitutionally guaranteed parliamentary immunities following a recently released damning report on political parties for receiving foreign funds. His corruption drive seems to also be his answer to the economic crisis. Like many in Tunisia, he seems to believe that recouping money embezzled by corrupt officials from the Ben Ali era and creating new disincentives for corruption will be sufficient to spark economic growth. They will not, and this is not effective economic policy. Furthermore, he has does not have a plan to tackle the pandemic, other than handing over the response to an ill-equipped military. Nor can he come up with a viable economic recovery plan without substantial support from a wide range of economic and political actors, including the powerful unions and the international community, given the extent and the gravity of the crisis, the stalled talks with the IMF, and the need for new external inputs and assistance. Kais Saied will soon find that the path he chose is not the way out.