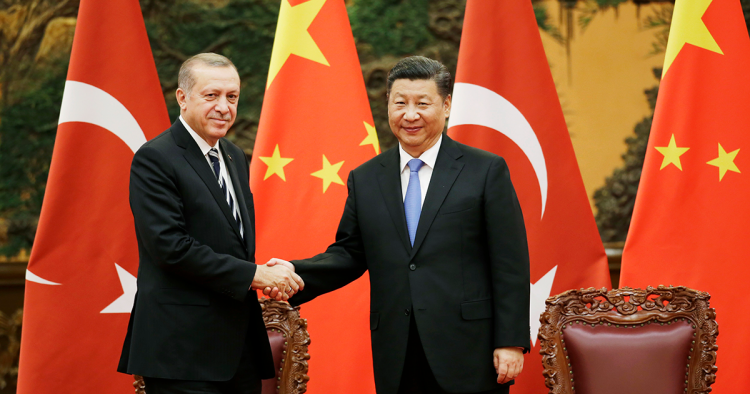 The People’s Republic of China (PRC) is upping its Black Sea engagement. To date, China has been hesitant to commit to greater transport linkages and the accompanying politico-economic interventions along the region’s southern routes. Through its Belt and Road Initiative (BRI), the PRC instead largely opted for the greater stability sea and northern overland routes provide. Yet its recent multi-sectoral engagements in Turkey suggest that the Black Sea region’s significance is on the rise in Beijing.

On the cusp of its 100th anniversary, the Republic of Turkey has seen better days. Its economy continues its spiral downward while unemployment and inflation remain on the rise. Increasingly isolated internationally, Turkey has little love in Europe or America. Recently, its foreign policy agenda has inevitably conflicted with key Russian interests on several fronts, including Syria, Libya, and the South Caucasus. With the exceptions of Qatar and the current government in Tripoli, Ankara can call on few friends in the Middle East.

Enter China. Under Recep Tayyip Erdoğan, Turkey has consistently sought Beijing’s favor and investment. Erdoğan advocates the union of Turkey’s Middle Corridor intercontinental transport initiative with BRI development efforts, even citing their “natural harmony.” Accordingly, Turkey and the PRC penned an MOU in 2016 for the Trans-Caspian International Transport (TCIT) route for containerized rail transport from China to the European Union. While China has yet to use southern Eurasian land routes in earnest, Ankara’s BRI and Shanghai Cooperation Organization overtures signaled its desire for closer PRC ties.

Until recently, this approach was a key aspect of Erdoğan’s broader effort to balance Turkish interests between increasingly adversarial West-East agendas. Yet evermore bereft of friends and contemptuous of assistance from the International Monetary Fund, Erdoğan looks more to Beijing. Last year amid a plummeting lira, Turkey’s Central Bank permitted for the first time the repayment of outstanding import debt to China in yuan. This unprecedented step was taken in the wake of the PRC’s increase of its 2020 swap agreement with Turkey from a $2.4 billion ceiling to $6 billion. Immediately afterwards, one of Turkey’s top telecommunications companies, Turk Telekom, announced that it will start paying its import bills in yuan.

Backing the embattled lira is only one avenue of Chinese intervention. Its commercial presence in Turkey’s economy is growing as well. Presently, there are more than 1,000 Chinese companies active in the country, including a number of smartphone manufacturers. China aimed to increase investment in Turkey to $6 billion in 2021; post-pandemic, this goal stands to be realized. The PRC is further Turkey’s top importer at $23 billion in 2020.

China’s footprint in Turkey’s newer infrastructure is sizeable. Beijing’s TCIT works culminated in the arrival of the first train from Xi’an to European Istanbul in November 2019. Turkey is open to China’s seaborne transport as well, with its COSCO Shipping Ports purchasing a controlling share ($940 million) in Turkey’s third-largest container port, Kumport Terminal, in 2015. Chinese finance to the tune of $6.2 billion provided for the construction of the new Istanbul Airport, which opened in 2019.

Currently, media reports suggest that Ankara has had some success attempting to woo Chinese investment for Erdoğan’s controversial and reckless $15 billion “Canal Istanbul” as an alternative to the Bosphorus Strait. The project is a potential debt trap and should Turkey prove unable to meet obligations over any future Chinese financing and construction work, it could well leave a completed, strategically valuable Black-Aegean Sea waterway under Chinese Communist Party (CCP) control.

Erdoğan has further compromised sectors critical to Turkey’s national security. Despite the considerable progress Turkey has made in developing its indigenous arms industry, its full military needs cannot be met domestically. For example: Ankara has been courting Islamabad with the aim of getting in on the PRC-Pakistani joint manufacture of the JF-17/FC-1 multi-role combat jet. Turkey has also taken an interest in helping to produce Pakistan’s Shaheen ballistic missile, also a byproduct of Chinese military technology. Turkey’s participation in their production would enhance its own development of the TF-X fighter aircraft and long-range missile projects. The combination of U.S. sanctions on Turkey over its S-400 missile purchase and the adaption of Chinese military technology, via Pakistan or otherwise, is leading to Turkey’s increased reliance on China’s arms industry.

Erdoğan further courts danger in his willingness to increasingly rely on Chinese energy interventions. China’s largest investment in Turkey is in the Hunutlu Thermal Power Plant. With Shanghai Electric Power as the three-quarters majority shareholder, Emba Electricity Production commenced construction on this $1.7 billion coal energy project in 2020. In stark contrast to Beijing’s willingness to boost coal consumption, Chinese firms have also bet on Turkey as a manufacturing and export point for renewable energy products. HT-SAAE, owned and operated by Shanghai Aero Auto Electromechanical, established HT Solar Energy near Istanbul in 2016 to produce solar cells and modules. To date, HT Solar Energy has manufactured 750 MW worth of panels and provides job opportunities to over 500 Turks.

The third at-risk critical sector is telecommunications. In 2018, Turkish telecom giant Turkcell became the first provider outside of China to use Huawei’s mobile app infrastructure. Earlier in 2016, the partially PRC state-owned ZTE Corporation acquired 48% of a leading Turkish telecom equipment manufacturer for $101 million. By 2020, Turkey’s entwinement with Chinese telecoms had become so pervasive that then-Secretary of State Mike Pompeo publicly acknowledged that Turkey’s military networks are now compromised. The resulting degrees of isolation from the U.S. and NATO due to Turkey’s adoption of PRC technology in turn fosters Ankara’s increased reliance on Beijing, thus weakening transatlantic ties even more.

Ranking hallmarks of Erdoğan’s governance style include intransigence and inflexibility. Numerous leaders in Washington and several European capitals have borne the brunt of Erdoğan’s disdain for the West and consequent disregard for its norms and institutions. Those desirous of an allied and genuinely democratic Turkey need to accept that this will not happen under Tayyip. This limits policy options that could induce different behavior. Moreover, there needs to be an appreciation that the deeper the embedding of Beijing’s financial aid, infrastructure projects, and technology, the more difficult the extraction when the Justice and Development Party (AKP) eventually falls and is potentially replaced by a more West-leaning, democratic government. This indicates that time is a key consideration.

Between these two factors, transatlantic political and military leadership has limited paths forward before Erdoğan and the AKP’s inevitable demise. In the meantime, the world democratic community should continue to forthrightly condemn the Erdoğan government for its ongoing disregard for fundamental individual freedoms and minority rights, especially its abhorrent discrimination against Turkey’s Kurdish citizens. At the same time, American and European policymakers should aim to constrain Erdoğan’s ambitions of Turkish power projection in its near abroad through political isolation, reduced financial assistance, and military presence. Regarding the latter: France and Italy’s naval flotillas in support of Greek and Cypriot assertions of natural gas drilling rights send an unequivocally clear message to Erdoğan in a language he well understands. Arguably tough medicine may turn Erdoğan more toward China as well as Russia; however, Turkey’s establishment is not about to forego membership in the world’s most prestigious military alliance nor unduly upset its largest trading partner, the EU. As for Russia, Ankara and Moscow’s conflicting foreign policy priorities will limit prospects of a deeper alliance.

Aside from proactively ramping up criticism and consequences, there is little more the West can do but wait. Noting the exception of Mustafa Kemal Atatürk’s Republican People’s Party (CHP), no governing party in the history of the republic has survived its founding leader’s removal or resignation. Presently, there is little evidence to suggest that the AKP will last beyond a lost presidential election or other event forcing Erdoğan’s abdication. Who may be next remains uncertain. Yet considering the typically slim majorities that have elected the AKP and its coalition partner, the Nationalist Action Party (MHP), to power, those voters envisioning a democratic and transatlantic Turkey increasingly independent of Chinese — and Russian — influence may well have their day.

Richard Kraemer is a Non-resident Scholar with MEI's Frontier Europe Initiative. The views expressed here are his own.