COVID-19 Fuels the Return of Islamism in Indonesia 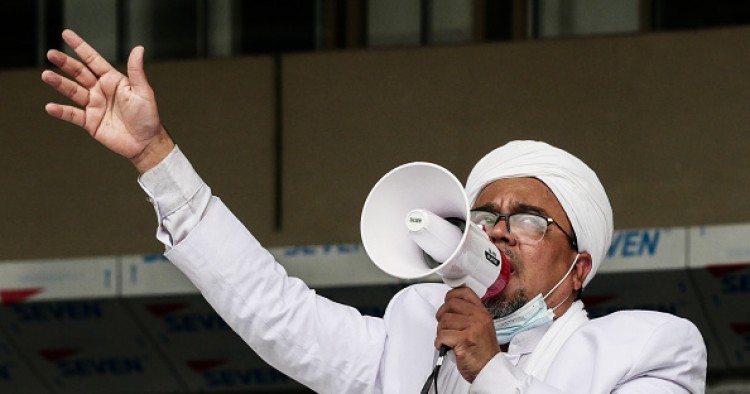 Covid-19 has struck Indonesia harder than any other Southeast Asian country.[1] Hardline Islamic cleric Rizieq Shihab seems to have timed his return to Indonesia to exploit his opponents’ unfavorable circumstances as they struggle to bring the public health crisis under control and mitigate its adverse socioeconomic effects. As the economic fallout from the pandemic slowly hits the country’s informal sector — and thus the country’s poor — Rizieq will once again have a perfect opportunity to capitalize on people’s grievances and their desire for a better future. Armed with populist ideas wrapped around an Islamist narrative that offers a simple explanation for complex problems in a pluralist society, Rizieq might decide that the time is ripe to build a strong coalition and try his luck again in the coming 2024 presidential elections.

Contrasting Images of the FPI

Even before his self-imposed exile in Saudi Arabia in 2017, Rizieq Shihab has been a vocal critic of democracy and some of the main tenets of Pancasila, the guiding principles of the Indonesian state. Having co-founded the Islamic Defenders Front (FPI) as a civilian militia with the backing of the army in 1998, Rizieq rose to prominence during the 2016-2017 Islamist protests in Jakarta. Back then, he was one of the leaders of the campaign against then-governor of Jakarta Basuki “Ahok” Tjahaja Purnama, an ethnic Chinese Christian, who was accused of blasphemy after referring to a verse from the Qur’an during his campaign to be elected governor.[2]

Despite his obsession with the blasphemy case against Ahok, Rizieq already had a history of  defiance against the Indonesian state. Often referred to as an “Islamist populist,” Rizieq has always seen democracy as the paramount danger to the Indonesian society. The FPI was initially founded in opposition to the student-led reform movement that brought down President Suharto. It was one of the groups subsidized by the military and the police that was supposed to contain the movement, despite Islamic students playing an important role during the demonstrations.[3] Indeed, the description of street-fighting between thugs and students alongside widespread violence during the protests in 1998 eerily resembles the days of havoc in Jakarta during the 2017 anti-Ahok demonstrations.[4]

But since its establishment in the late 1990s, the FPI has come a long way, riding a wave of rising Islamism (or Islamic populism) to become a potent political force. The group, and particularly Rizieq, became politically influential not least due to their charitable work across Indonesia in disaster-hit areas after earthquakes and tsunamis.[5] Despite its notorious image as a vigilante group, the FPI managed to partially burnish its image as a benevolent humanitarian and social welfare organization that is responsive to the needs of the country’s poor and marginalized — distributing relief aid and conducting search-and-rescue activities following natural disasters.

Indeed, it is the country’s poor who are likely to suffer most as result of the economic fallout from Covid-19 in the coming few years. The country has been affected particularly badly by the pandemic with one of the highest death toll among other countries in the region. After an initial delay in imposing large-scale social and movement restrictions and subsequent policy inconsistencies, President Joko “Jokowi” Widodo has been widely seen as trying to protect the country’s economy rather than people’s lives. In fact he spoke of his government’s focus on the economy as a main priority during an interview with the BBC in February of last year.[6] Nonetheless Jokowi seems to have managed to at least partially shift the blame towards his cabinet, initially merely threatening to reshuffle his cabinet and in December 2020 acting on the threat. The move was particularly important as he also replaced the controversial health minister, Terawan Agus Putranto, who had come under strong public criticism and had been targeted in an online petition for his resignation due to the handling of the pandemic.[7]

According to World Bank forecasts, Indonesia’s economy is likely to grow around 4.4% this year after contracting by 2% in 2020.[8] The projected growth rate is much lower than over the past several years; moreover, it seems that the country’s informal sector is bearing the brunt of the economic downturn.[9] In fact, more than half of the workforce (around 71 million people) in Indonesia is engaged in the informal sector, which was probably one of the reasons why it was so difficult to implement large-scale lockdowns. And despite several aid packages announced by the government in an effort to offset the economic fallout from the pandemic, it is unclear whether these can be implemented and even tracked effectively, not least due to the scarcity of  data of workers in the sector.

In addition, Jokowi’s decision to implement a new job reform law drew thousands of people to the streets in October last year. The demonstrations continued nationwide for several weeks, with protesters calling on President Jokowi to resign and to rescind controversial legislation that labor unions and other organizations had charged would loosen environmental protection and weaken worker rights. And while the demonstrations were cut short due to the Covid-19 pandemic and related restrictions, the bill will most likely remain a major rallying point against Jokowi and his government. In fact, a Kompas survey of public trust in Jokowi’s leadership conducted last October showed that less than 40% of people were satisfied with his leadership. It is unclear whether this was an outcome of the inefficient handling of the Covid-19, passing of the job creation law or both.[10]

In light of this, it is not surprising that some of the groups that joined widespread protests against the bill included the Islamic Defenders Front and the 212 Alumni Brotherhood (PA212), a movement born out of the Ahok protests in 2017.[11] The PA212, it bears mentioning, consists of more conservative elements from the FPI but also includes members of the Indonesa Council of Young Intellectuals and Ulema, Hizbut Tahrir Indonesia and other Islamic groups. In addition, the alliance together with the FPI both supported Prabowo Subianto, the candidate who had challenged Jokowi for the presidency in the 2019 general election.[12] It now appears likely that these groups will use the job creation law as a potential rallying point in the elections scheduled to take place in 2024.

Jokowi’s apparent loss of public trust in his leadership, there could not have been better timing for the return of Rizieq Shihab described as  Widodo’s “most formidable foe.”[13] On November 10, 2020 when he arrived at Soekarno-Hatta Airport near Jakarta, tens of thousands of supporters gathered to welcome him. Indeed some international reports suggest Jokowi’s security apparatus failed to predict the amount of followers that would arrive thus creating cancellations and traffic jams surrounding the airport.[14] In fact, the immense crowds continued to gather during the first few weeks following his return to Indonesia, when he appeared on several large rallies. In a sign of Rizieq capitalizing on public sentiments, he rallied followers, speaking of increasing impoverishment across the country, corruption, lack of morality in current leaders, effects of the Covid-19. Importantly, the charismatic and controversial cleric, who in remarks to crowds of supporters, called for a “moral revolution” to save the country, appears to have embarked on a new political campaign before the presidential polls in 2024.

The momentum generated by Rizieq’s return accompanied by rumors of a nascent coalition between him and other political figures in the country,[15] seems to have pushed the government to believe it had few options other than to try to head off Rizieq’s gambit before it grew into a more substantial challenge. After firing several local officials responsible for proper enforcement of Covid-19 restrictions, the authorities have charged the cleric with obstruction of law enforcement and violation of the quarantine law. However, the government apparatus has probably yet again underestimated Rizieq’s appeal and support among many Indonesians. Rizieq’s detention in December sparked several incidents — a few of them also violent — across the country, including protests at local police outposts in West Java and South Sulawesi, and at least two instances in which supporters hurled Molotov cocktails.[16] A series of violent incidents escalated at the beginning of December during a shootout between Rizieq’s supporters and security officers on the Jakarta-Cikampek toll road, east of the capital city — details of which remain unclear.

Since then the authorities have taken even more resolute steps to crackdown on the movement. Not only did Jokowi order an outright ban of the FPI on December 30, the country’s anti money-laundering agency also temporarily froze several bank accounts tied to the FPI and their associates. In addition, there have been several reports of the military removing posters bearing Rizieq’s image and threatening to arrest those who defy the government’s narrative regarding the FPI.[17] While these and several other measures seem to be aimed at paralyzing one of the most prominent hardline Islamist groups in Indonesia, the prospect for demobilizing its supporters seems dim at best as the group has already changed its name and continues to operate.

One of the most surprising aspects of the current power struggle between the FPI and Jokowi is the fact that both sides have followed the same patterns of behavior as they previously had. Back in 2017, Jokowi cracked down in a very similar manner on another hardline Islamist movement in Indonesia, Hizbu Tahrir (HTI). In fact, there are now reports of the FPI is recruiting some of the former members of HTI and that elements from the two groups are training together to improve their combat skills. On the other hand, FPI, or at least Rizieq, seems to be again following the practice of public incitement against the current government, just as he had in 2017, including questions surrounding blasphemy.

While Jokowi is barred from running for president for another term, he is probably trying to preserve his legacy while potentially preparing a path for his son, Gibran Rakabuming Raka, who ran and won mayoral elections in Surakarta last year. In addition, rising Islamism in Indonesia has become a more pronounced trend over the past few years, presumably one of the reasons why Jokowi himself tried to improve his religious reputation during the elections in 2019. But given the current situation it now appears unlikely that Jokowi’s win in the election has been an uncontested win for democracy and pluralism in the long term. Probably the greatest risk now posed by Rizieq and his followers is the rise of a more hardline and intolerant narrative as an outcome of political coalition-building.

Whether FPI will be able to mobilize itself and pose a significant challenge during the 2024 elections depends on several factors. A complete crackdown on the group and most importantly on Rizieq himself has a great potential to backfire, not least as it would depict the clerics as the group’s martyr and make him a perfect leader for the masses. At the same time, Jokowi’s government seems to be trying to salvage its competence via vaccination roll-outs and belated containment of the virus.