The Danger of Conflict Between the Syrian Regime and Y.P.G. 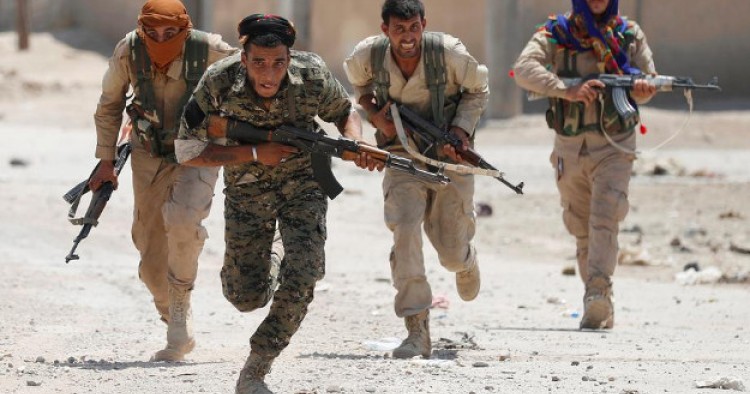 Both the Trump and Obama administrations have made defeating ISIS the United State’s number one priority in the Middle East. In Syria, this focus led the United States to support the Kurdish People’s Protection Units (Y.P.G.) against ISIS. One of the major contributing factors behind this decision was that the Y.P.G. was not actively hostile to the Syrian regime, unlike the Syrian opposition. U.S. support for the Y.P.G. would not lead to conflict with the Syrian regime, Russia, or Iran—as long as the Y.P.G. and regime remained at peace.

Till now, the two sides have largely retained cordial relations, even cooperating militarily on occasion. However, this peace and cooperation is not guaranteed to last, as the regime and the Y.P.G. have fundamentally irreconcilable end goals for a Syrian state. The regime seeks a de jure centralized Arab state; federalism or official recognition of Kurdish language or culture is not palatable for the Baathist government. On the other hand, the Y.P.G. sees a decentralized and federal Syria as a key goal, one that allows for Kurdish language rights and the Y.P.G. to maintain its military force independent of the regime.

These disparate visions for a post-conflict Syria, coupled with rising tensions in eastern Syria, could lead to conflict between the two sides. A conflict between the Y.P.G. and the regime would complicate the U.S. fight against ISIS in Syria, and risk dragging Washington into an intra-Syrian dispute, as the recent U.S. downing of a regime jet after it attacked Y.P.G. positions showed.

Opportunistic Cooperation: The Regime and the Y.P.G.

Additionally, in March 2017, the Y.P.G. surrendered territory to the regime and Russian forces near the town of Manbij in Aleppo Governorate. The Y.P.G. hoped to halt a Turkish offensive toward Manbij, an existential threat to the Y.P.G. The buffer zone insulated the Y.P.G. from attack, as Turkey is unwilling to engage regime or Russian forces in combat. This does not seem to have been replicated elsewhere in Syria. Rather, the Manbij deal was a one-off event to halt the advance of a common foe.

Neither of these opportunistic operations, however, guarantee long-term peace between the two sides. With Aleppo secured, the regime has little reason to continue cooperating with the Y.P.G. As a result, the peace between the two could easily fall apart, or perhaps break into open warfare, especially as both compete over eastern Syria. 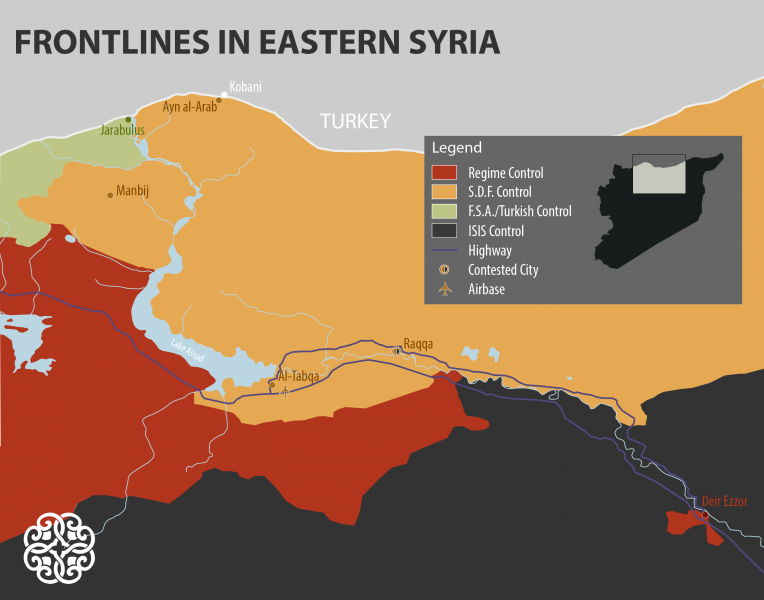 With key areas in western Syria secure, the regime has turned its focus eastward, advancing toward Raqqa and Deir Ezzor. The regime now shares a growing militarized border with the Y.P.G. The two now share a 40-mile-long frontline, an inherently destabilizing situation that sets the stage for tensions and possibly even a future conflict.

Similar situations have led to conflict between the Y.P.G. and the regime in the past. For example, in April 2016, a minor dispute between Y.P.G. and pro-regime forces at a checkpoint in Qamishli escalated into open warfare, leading to dozens of deaths until a cease-fire was reached.

In an attempt to prevent Y.P.G. and regime clashes, Russia has reportedly established a center in eastern Syria through which the Y.P.G. and the regime could deconflict operations. However, it is not clear how successful this attempt will be, given previous failed Russian deconfliction attempts with U.S.-backed forces.

No Room for Compromise: Iran, the Regime and the Y.P.G.

To preclude the possibility of a regime-Y.P.G. conflict, the United States could push for negotiations between the two. However, negotiations would need to surmount significant odds with both sides entrenched in their opposing views The regime is unwilling to compromise on Kurdish autonomy, a de facto Y.P.G. precondition for any sort of peace agreement.

Russia, hoping to ensure peace between its allies, the regime and the Y.P.G., facilitated negotiations between the two in 2016. In pursuit of these goals, a political party, known as the Syrian National Resistance, was formed as a dialogue channel between the regime and the Y.P.G. By March 2017, negotiations had completely fallen apart, as the regime refused to accept any form of compromise that involved giving the Y.P.G. autonomy. In the same month, the Syrian National Resistance dissolved, citing fundamental differences in outlook between the Y.P.G. and the regime. The United States, with less leverage over the regime than Russia, is unlikely to have more success, should it embark on a similar approach.

In addition to the regime’s unwillingness to reach a compromise with the Y.P.G., Iran sees the Y.P.G. as a serious threat to its interests. Iranian government-affiliated Fars News even declared any attempt to create autonomous regions in Syria—a reference to the Y.P.G.’s autonomous region—to be a U.S. plot. In response, the Y.P.G. has shifted toward espousing anti-Iranian and anti-regime rhetoric, possibly in an attempt to woo outside support from Saudi Arabia.

This hostility extends beyond just rhetoric. Iran has created a tribal militia for retaking Y.P.G. territory in eastern Aleppo Governorate around Manbij. The fact that the Y.P.G. does not fight the regime, only ISIS, does not necessarily keep the group out of Iranian crosshairs. Iranian-backed Iraqi militias have repeatedly attempted to attack U.S.-backed fighters in southeastern Syria that, like the Y.P.G., only fight ISIS and not the regime.

The Y.P.G. and the regime’s visions for an end state in Syria are fundamentally irreconcilable. As the failed Russian-backed negotiations have shown, the regime is not interested in any sort of long-term agreement with the Y.P.G. Iran, viewing the Y.P.G. as a U.S. proxy, is preparing for a conflict with the group, training militias to attack Manbij and engaging in increasingly hostile rhetoric.

The stage is now set for further tensions and possible hostilities between the Y.P.G. and the regime in eastern Syria. As shown by the recent downing of a Syrian jet, it does not take much for such minor clashes to escalate into crises with significant ramifications for the United States and its allies.