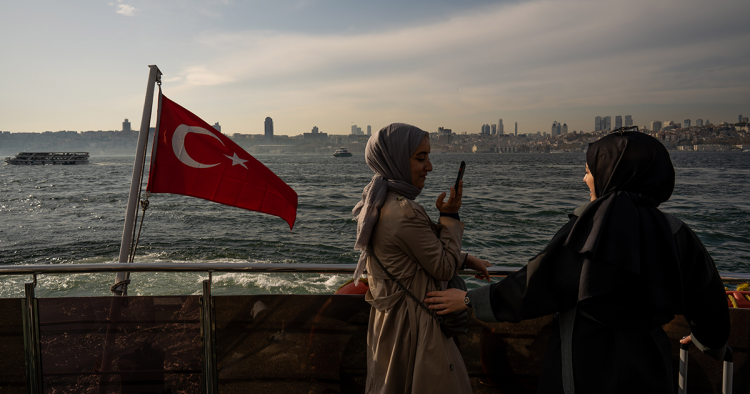 On Sept. 30, 2013, then Prime Minister Recep Tayyip Erdoğan announced what he termed a “democratization package,” which lifted the decades-old ban on women wearing headscarves in many state institutions. A month later, when four female MPs wearing headscarves walked into the Turkish parliament, many thought the long-running controversy on the issue was finally over. But the headscarf recently returned to the center of the Turkish political debate when the leader of the main secularist opposition Republican People’s Party (CHP), Kemal Kılıçdaroğlu, announced that he would introduce legislation to protect that right. Kılıçdaroğlu’s move, aimed at appealing to conservative segments of the country ahead of the upcoming June 2023 elections, prompted a flurry of responses from secularist Twitter users, women’s organizations, and opposition parties, making clear that the social anxieties surrounding the issue are far from resolved. Women who wear the headscarf are concerned that they will lose the rights they secured under Erdoğan if the opposition comes to power. Secularists fear that Kılıçdaroğlu’s proposed legislation would pave the way for an Iran-style mandatory headscarf. The key to allay those fears is to enshrine in law women’s right to choose. Only then can the country expand freedoms for all and prevent politicians from using women’s bodies as symbols of political ideology.

Both the secularists’ ban on the headscarf and Erdoğan’s “democratization package” that lifted it were launched in the name of emancipating women. In reality, however, they both sought to impose their own version of the ideal woman on society. For Turkey’s founding father, Mustafa Kemal Atatürk, the ideal woman was the “republican woman,” who represented his vision of a modern, Westernized, and secular state. Through top-down reforms, Atatürk wanted to refashion a traditional society into a Western one. Public symbols such as dress became the cornerstone of that radical change. The “republican woman” was expected to contribute to the republic’s modern, secular transformation — a task that entailed freeing herself from religious norms around clothing.

The radical reforms Atatürk carried out expanded the civil and political rights of women considerably. As early as the 1920s, women in Turkey gained the right to choose their spouses, initiate divorce, and demand child custody. They were granted access to education and the right to vote and run in municipal and national elections. All of these reforms increased the visibility of women in the public sphere and afforded them opportunities comparable to those in Western countries. Yet Atatürk’s reforms failed to truly emancipate women. Despite claims to the contrary, the new laws and regulations did not ensure gender equality. Instead of challenging the gender roles enforced by the old regime, they simply replaced the Islamic patriarchy of the Ottoman Empire with a secular one. One of the key reasons for this continuity was Atatürk’s definition of womanhood. He saw motherhood as women’s most important role and defended the changes made by the state not as an effort to expand their rights on an individual level, but as a means to raise “enlightened” mothers and wives. These reforms denied women selfhood. The “republican woman” in her “Western” attire and with her uncovered hair became the symbol of the new republic’s modern, Western, and secular identity, but remained subservient to the state and the patriarchy it enforced.

Atatürk’s reforms had other problems as well. They were only adopted by urban, middle-class women, who were willing to dress in ways the state deemed “modern,” and discriminated against large segments of rural, lower-class, traditional women, who wore the headscarf. The laws and policies imposed by secularist elites in subsequent years, such as the ban on wearing the headscarf in public institutions, including universities, imposed in the aftermath of the 1980 military coup, violated the fundamental rights of veiled women.

When Erdoğan lifted the ban in 2013, many applauded the move as a critical development that would bolster freedoms and democracy. Indeed, it was a long overdue reform, but like the previous steps taken in the name of emancipating women, it failed to advance freedoms for all. Just like the secularists, Erdoğan too saw women’s attire as a symbol of his vision for the country. After sidelining his secularist opponents, Erdoğan turned to Islam to mobilize support for establishing an executive presidency that would grant him unchecked powers. To secure the consent of conservative segments of the country for his power grab, he sought to Islamicize society by promoting “Sunni Muslim domination” in every sector of social, economic, and political life. Under his watch, Islam became pervasive, particularly in matters related to the family, education, and law. Religious orders and communities that backed Erdoğan’s autocratic vision took up key positions in the state bureaucracy. Lifting the ban on the headscarf was emblematic of Erdoğan’s broader Islamist populist agenda. While it addressed the human rights violations committed against veiled women, it also victimized those who choose not to cover their hair. Women without headscarves are subject to harassment and discrimination in the workplace. In a telling example, a few days after Erdoğan lifted the ban on the headscarf, the deputy chairman of his party criticized a female TV show host for wearing a revealing blouse on air. The channel dismissed her shortly afterwards.

Despite the progressive steps taken on the headscarf issue, women in Turkey today are in a worse place in terms of labor participation, leadership, access to finance, civil and political freedoms, education, and health. Last year the World Economic Forum’s Global Gender Gap Report, which measures these factors, ranked Turkey 133rd out of 156 countries. Erdoğan’s views on women account for much of the backsliding. He never truly intended to liberate them, whether or not they wear a headscarf. Like the leaders who came before him, he does not believe in gender equality. He sees women only as mothers or wives, not as individuals. He describes birth control as “treason,” tells women that “rejecting motherhood means giving up on humanity,” and urges them to have at least three children. Erdoğan’s discriminatory, misogynistic, and sexist statements perpetuate and lead to more violence against women. Last year, he announced that Turkey was pulling out of the Istanbul Convention, a European treaty to combat violence against women. Since then, the number of femicides has skyrocketed. Men feel more empowered to act without fear of repercussions and courts grant perpetrators impunity.

The root cause of the discrimination, inequality, and violence women face in Turkey is the patriarchal structure that has denied them the ability to exercise agency as individuals. Both the secularists and the Islamists saw women as the embodiment of their national visions. The “republican woman” was expected to dress and behave in a manner dictated by the state. She was a “citizen woman” expected to contribute to Atatürk’s vision for the country. In Erdoğan’s Turkey, women serve a similar function. Once again, they are the symbol of his vision, a constant reminder for Erdoğan’s opponents and supporters of the victory of Sunni Islam and the secularists' defeat.

The key to truly liberating women is to empower them as individuals and legislate women’s right to choose. Whether it is about when or whether to be pregnant, how many children to have, or whether to wear a headscarf or not, women must be free to decide for themselves. Kılıçdaroğlu’s proposed bill, which seeks to safeguard the right of women's employment in public institutions with or without a headscarf, is an excellent first step in ensuring women’s right to choose and empowering them to reject patriarchal norms that have animated both the secularist regime and its conservative opponents.

Gönül Tol is the founding director of the Middle East Institute’s Turkey program and a senior fellow for the Frontier Europe Initiative. She is the author of Erdogan's War: A Strongman's Struggle at Home and in Syria.

HTS, Turkey, and the future of Syria’s north