A decade on, the Syrian crisis is far from over and the US must step up 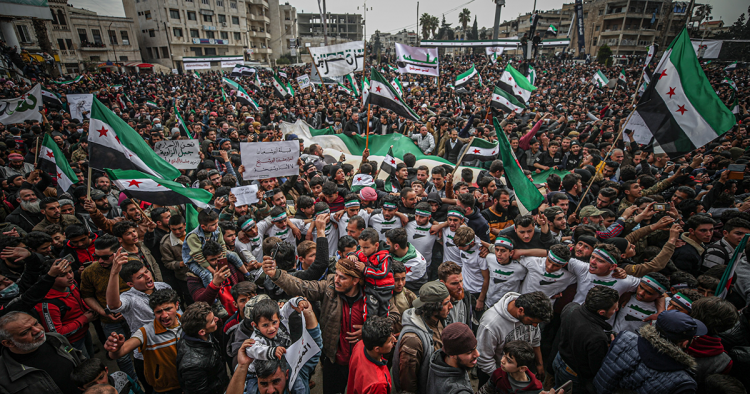 As Syrians mark the 10-year anniversary of the 2011 uprising this week, it remains inescapably true that the country’s debilitating crisis is far from over. After a decade of conflict that was initiated and driven by an utterly ruthless regime and reinforced and diplomatically protected by its Russian and Iranian allies, Syria is broken. At least half a million are dead, over 100,000 remain missing, and 12.5 million — over half the population — are displaced, internally and externally. With an economy crippled by years of all-out war and run by a deeply corrupt regime and incompetent government, over 90% of Syrians now live under the poverty line and an average state salary amounts to a mere $10. Over half of Syria’s basic infrastructure is destroyed or unusable and reconstruction remains a distant fantasy. Across non-regime-controlled northern Syria, Russia’s restriction of aid access has dramatically exacerbated a humanitarian crisis where one in three children are now malnourished and displaying signs of stunting.

Though the height of nationwide hostilities appears to have subsided, Syria remains beset by multiple zones of conflict — each involving different forces driven by their own unique local dynamics. Areas violently recaptured by Syria’s regime in 2018, like the country’s south, are now the most impoverished and violent, as the more than 400 attacks recorded in Daraa governorate in 2020 underlined. Though ISIS’s territorial caliphate was defeated in March 2019, the group is now undertaking a methodical resurgence across Syria’s vast central desert, where regime forces have proven incapable, sitting targets. ISIS attacks there have consistently increased in scale, scope, and potency since early 2020. Though cease-fires remain largely in place in the northwest and northeast, both regions are tinderboxes, where a single spark could swiftly precipitate crippling violence. And above all of this, Israeli aircraft continue to confront a persistent Iranian campaign to convert its military gains in Syria into a strategic threat to Israel.

A decade of failure by the international community

The preceding two paragraphs present just a glimpse of the true scale of destruction, chaos, violence, and human suffering that a decade of conflict has reaped in Syria. As United Nations Special Envoy Geir Pedersen declared on March 15, there can be no doubt that the international community has resolutely failed Syria, abandoning the country and its people to a level of violence and suffering not seen in decades. In the early years, our response was defined in part by indifference, indecision, and contradiction. When ISIS then exploited the resulting havoc to explode dramatically onto the scene, our response became more determined and focused — but not only was that resolute action concentrated on tackling a symptom of Syria’s crisis, it actually catalyzed new drivers of conflict. As we focused determinedly on fighting ISIS (whose apocalyptic force was responsible for only 2% of civilian casualties in Syria), we systematically withdrew from addressing the root cause of Syria’s crisis: the Assad regime, which along with its allies have been responsible for 91% of civilian casualties since 2011.

If there was one diplomatic line that has been repeated most often on Syria, it was that “there is no military solution to the Syrian crisis.” Well, Bashar al-Assad, Vladimir Putin, and Qassem Soleimani (if he were still alive) would beg to differ. Ten years of conflict in Syria has taught the world’s dictators and their future successors one simple lesson: if you dig in, muddy the waters, and employ every means at your disposal to squash domestic opposition, the world will almost certainly not get in your way. A cursory look at Myanmar today, for example, puts that reality clearly on display. That Syria’s regime has committed more than 340 chemical weapons attacks and faced no meaningful consequences will almost certainly have ripple effects for many years to come. That Russian fighter jets could utilize “deconfliction” coordinates provided by healthcare workers to the U.N. to flatten hospitals in front of our eyes is nothing short of shameful.

A source of regional and international instability

Today’s policy of ambivalence must stop. Syria’s crisis is not a self-contained local dispute of negligible relevance to the world. Far from it. In fact, Syria’s crisis has transformed the world in profoundly negative ways like no other conflict has done in decades. The idea that Syria can be put on the back-burner or abandoned altogether as a “mess” to be “dealt with” by others is hubris on a staggering scale. Some have described today’s Syria as resembling North Korea, while others compare it to Somalia. In truth, it’s arguably a combination of the two, and in the heart of an otherwise combustible Middle East, that is a recipe for further disaster.

Although he has survived a decade of conflict, Assad cannot be described as its victor. In his ruthless pursuit of victory, Assad has done as he intended: he has burned the country, treating his opponents as “germs.” In so doing, he appears to have permanently demolished every foundation upon which he would otherwise be standing in order to rule. As the original root cause of the 2011 uprising, his persistent place in Damascus’ President Palace guarantees Syria’s intractable paralysis. Communities that have long stood by his rule over the years are awakening to this reality and speaking their minds more loudly than ever before — particularly members of his own Alawite sect. This is not the recipe for stability and no matter how many sanctions were lifted, today’s reality would not change.

The time has come for the United States to step up and treat Syria’s crisis with the same level of focus and determination as it has devoted to countering ISIS. Continuing to tackle the latter while ignoring the former is simply nonsensical. The U.S. does not hold a solution in its hands, and nor is it the key to a resolution — but it must play a role in re-energizing diplomacy aimed at achieving what the last decade has failed at. Four years under President Donald Trump degraded American leverage, but our allies in Europe and partners at the U.N. are waiting increasingly impatiently for the U.S. to wake up. As U.N. Special Envoy Pedersen has stressed, a new multilateral format is needed, America needs to be at the table, and he is “absolutely convinced” that without the highest level of diplomatic investment, failure is again a guarantee.