Déjà vu all over again: The three “I”s of gasoline subsidies and social unrest in Iran 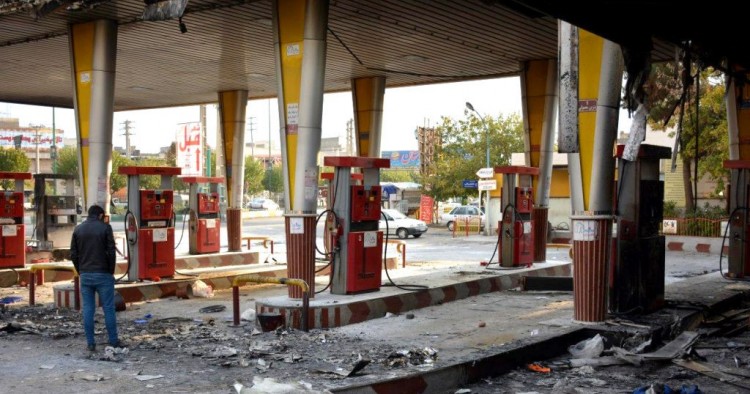 Adding to the backdrop of economic mismanagement, corruption, and increasing rates of poverty and inequality, the recent gasoline rationing and price hikes have ignited widespread and violent protests inside Iran. Many are dead and significant damage has been done to both public and private property, including banks, gas stations, office buildings, mosques, and police stations and vehicles.

Iran’s policymakers have been grappling with the issue of energy subsidies — including those on gasoline, diesel, natural gas, and electricity — for the past several decades. In recent years, the size of implicit and explicit energy subsidies has been estimated at around $75-80 billion annually, depending on the exchange rate. This is equivalent to about one-fifth of Iran’s GDP or 2.5 times the government’s budget. Not surprisingly, the astronomical cost has put Iran’s public finances under severe pressure, contributing to a continuous hyperinflationary environment as the government monetizes its budget deficits — increasing the money supply to pay its bills. What makes these subsidies even more outrageous is the fact that much of the benefits go directly to the wealthier segment of society, who own more or larger cars and residences and therefore consume substantially more gasoline, natural gas, and electricity than the average Iranian. According to estimates, Iranian households in the top three income deciles benefit 23 times more from energy subsidies than households in the lowest three deciles.

Therefore, there is no doubt that reforming, reducing, or removing energy subsidies is a necessary step toward saving Iran’s economy while also reducing poverty and inequality. Indeed, the money spent on subsidies could be put to much better use. For example, if handed to households as simple cash transfers, 40-50 percent of the total energy subsidies would be enough to eradicate all forms of poverty in Iran, while the remaining 50-60 percent could be channeled toward expanding and improving physical and social infrastructure, which is the backbone of and a prerequisite for equitable economic growth and higher productivity.

Before the recent rationing and price hikes, gasoline cost 10,000 rials per liter (33 cents per gallon), which was about one-sixth of the regional average, and there was no cap on the quantity that could be purchased. Therefore, while increasing the gasoline price to 15,000 rials (50 cents per gallon) for the first 60 liters and 30,000 rials ($1 per gallon) for any amount thereafter is a small step in the right direction, the policy is still highly inequitable, ineffective, and inefficient for a number of reasons, some which I would like to highlight here.

It is inequitable because the rationing of the first 60 liters of subsidized gasoline, which is priced at the extremely low price of around 50 cents per gallon — about one-fourth the regional average — is earmarked for vehicles and motorcycles. About 50 percent of Iran’s households, most of whom are in extreme poverty, do not own any means of private transportation, and thus these subsidies represent a massive handout to the middle class and the wealthy. Moreover, prices for consumption beyond 60 liters are still substantially subsidized at about $1 per gallon —about half the regional average. Therefore, although the recent rationing and price increases have reduced the total subsidies given to higher-income brackets, the policy is still far from being equitable. Scarce public resources are being spent on the wealthy and the bottom 50 percent of society who do not own cars or motorcycles receives no benefit from this subsidized rationing and pricing scheme.

It is ineffective because in Iran’s hyperinflationary economy, it is only a matter of time before the current higher prices (which are still heavily subsidized but not as much as before) will slide and once again be heavily subsidized in U.S. dollar terms. In other words, as long as Iran is running higher inflation rates than the U.S., the rial has to slide against the U.S. dollar. This means the current fixed prices of 15,000 rials (50 cents per gallon) for the first 60 liters and 30,000 rials ($1 per gallon) for amounts larger than 60 liters will continue to fall in U.S. dollar terms as the rial loses value due to inflation.

This same policy of rationing and increasing prices to fixed higher levels has been implemented in the past, without long-term success. Nevertheless, Iranian policymakers keep going back to the same ineffective recipe of ad-hoc and sudden price increases, which might have minimal gains in the short term, but are basically ineffective and destructive to the economy in the medium and long term. They have not learned or simply ignore the basic lesson that hyperinflation leads to a slide in the value of the rial vis-à-vis the U.S. dollar. In turn, this leads to higher levels of implicit energy subsidies, increases the budget deficit, and forces the government to monetize its deficits. This leads to more inflation, making implicit subsidies even larger, and so on — until the government is forced to once again increase gasoline prices in a sudden and ad-hoc manner, and the same vicious cycle starts all over again.

It is inefficient because even with the recent rationing and price hikes there is still a considerable gap between prices in Iran and those in neighboring countries, making fuel smuggling profitable. Under the previous pricing regime around 5 million gallons of gasoline and diesel were smuggled out of the country, costing Iran’s economy $24 billion (around 6 percent of GDP) annually.

While the recent price increases and the rationing system will make it less profitable and harder to smuggle fuel abroad, it will do little to eradicate fuel smuggling in the medium and long run. This is especially true because, as described above, these new higher prices in U.S. dollar terms will be eroded by hyperinflation in a short period of time, leading to larger gaps between gasoline prices in Iran and neighboring countries, and once again increasing the profit and motive for smuggling. Furthermore, one of the basic lessons of Econ 101 is that rationing or allocating equal shares to members of society without allowing them to trade the shares is highly inefficient, and the most efficient outcome is achieved when shares can be traded among those who hold them — hence the widespread implementation of “cap-and-trade” systems to reduce greenhouse gas emissions. Finally, one has to take into account the immense cost of the deaths and destruction caused by riots over the past week ignited by the sudden, ad-hoc, and non-transparent rationing and price hikes.

The three “I”s of inequitable, ineffective, and inefficient energy pricing policies in Iran can only be resolved through gradual price liberalization programs, with the resulting revenues channeled toward increasing and improving physical and social capital, enhancing social welfare programs, and addressing growing levels of poverty and inequality in Iran. A crucial component of successfully implementing such policies is an information and education campaign aimed at increasing the public’s knowledge, awareness, and acceptance of these policies and enhancing the government’s social capital through greater transparency that comes with such campaigns. Failing this, déjà vu episodes of sudden and ad-hoc increases in energy prices followed by social unrest will continue to remain a recurring part of Iran’s economic history.