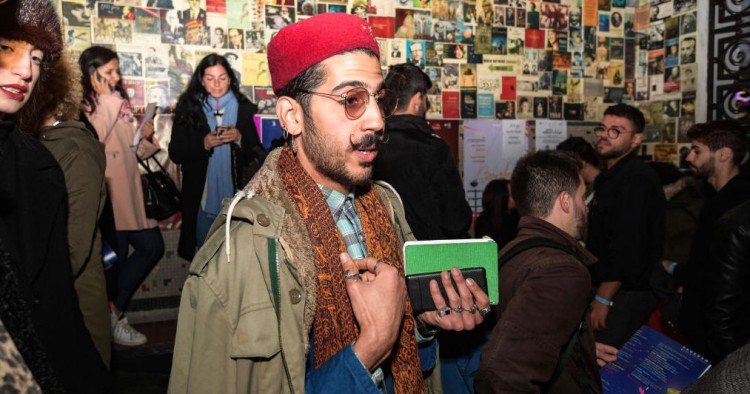 Later this year, hundreds will descend upon Tunis for the third annual Mawjoudin Queer Film Festival. The event, which features artists from around the world, celebrates non-normative sexuality and gender and is the first of its kind in North Africa. Crowds gather to party, watch films, and attend art exhibits in an environment where, as one attendee described it, “everyone is free to be their true selves.”

The festival’s sustained success reflects the persistent efforts of lesbian, gay, bisexual, transgender, and intersex (LGBTI+) activists in Tunisia to create a space for the queer community, despite severe legal and social discrimination. Article 230 in the Tunisian Penal Code, which Human Rights Watch and Amnesty International have condemned, outlaws the practice of homosexuality and carries a penalty of up to three years in prison. Article 226 criminalizes “harming public morals” and mirrors similar legal codes found throughout the Middle East and North Africa. In addition to legal barriers, the community faces social discrimination in a country where only 7 percent of Tunisians find homosexuality acceptable.

The precarious legal situation in Tunisia makes security a priority for activists and community members who fear arrest and imprisonment. Security protocols at the Mawjoudin Queer Film Festival reveal this emphasis, where some attendees wear tags stating “No Photography,” and media outlets are rigorously vetted by the organizers. The NGO behind the event, Mawjoudin (meaning “We Exist” in Arabic), only releases the location of the festival to registered and approved guests and asks that they do not use geolocation in any social media posts.

For LGBTI+ individuals in Tunisia, the internet and social media have played a critical role in the development of a community and activist network. Simultaneously, however, these technologies have been used by legal authorities to suppress and harass the queer community. According to Mawjoudin, over 90 percent of cases made under Article 230 used digital evidence pulled from cell phones, laptops, or social media accounts. In response to the weaponization of digital platforms against the LGBTI+ community, activists have increasingly emphasized the implementation of digital security measures to keep the community safe.

Under the authoritarian regime of Zine El Abidine Ben Ali, which was toppled during the Arab Spring, no official LGBTI+ organizations existed. However, the spread of the internet and social media throughout the 2000s created opportunities for underground connection and community organization. LGBTI+ Tunisians used fake profiles and photos online to meet and get to know each other. Yet the use of social media was not without risk, and some individuals were subject to blackmail. Those unwilling or unable to pay would then be “outed” — meaning their sexual identity was made public without their consent. Those that were outed faced social discrimination, with many rejected by their families and forced into homelessness. Negative social stigma surrounding LGBTI+ individuals continues to this day.

Following the 2011 revolution and the expansion of civil and political liberties, activism cultivated a stronger online presence while simultaneously gaining ground in official capacities. The first LGBTI+ organization to be recognized by the Tunisian government was Damj in 2011. By 2015 three more organizations, Mawjoudin, Shams, and Chouf, would transition from Facebook pages into official LGBTI+-focused NGOs in Tunisia. These four organizations focus on the defense of those charged under Article 230, offering legal support and lobbying government officials for the abolition of the law. They also work to build a support network for LGBTI+ individuals by providing health information and counseling and organizing community events like the Mawjoudin Queer Film Festival and Chouftouhounna, a feminist art festival put on by Chouf.

The entry of LGBTI+ rights into the public debate sparked serious backlash from legal authorities and online. Increased activism following 2011 mirrored a rise in discrimination and homophobia. Police have arrested hundreds on suspicion of homosexual behavior or for violating public decency laws. Government officials have also spoken out against the movement, attempting to shut down the activist group Shams in 2016 and again in 2019. Online, the practice of outing continues, and members of the LGBTI+ community are subject to blackmail and harassment. Facebook, which played an important role in organizing the Arab Spring protests in 2010-11, and other social media enabled the rapid spread of targeted homophobia and harassment.

One activist, Suleyman, described a time when they and a few friends took photos in drag and uploaded the pictures to a private Facebook group. Soon after, a photo of the activist was mistakenly posted to a public social media account, and harassment began. Initially the mockery, insults, and threats were contained to social media but then Suleyman was doxxed, meaning personally identifying information was posted publicly online. As their phone number and address spread across the internet, the situation rapidly devolved. Subject to in-person harassment, intimidating phone calls, and even death threats, they had to change addresses and phone numbers multiple times until the attacks subsided.

For LGBTI+ Tunisians, the internet has created incredible opportunities, connecting a once disparate community into a growing political and social movement. Yet, experiences like Suleyman’s demonstrate the risks of using social media and how an outlet for expression can also be used as a platform for attack.

Digital security and the activist community

In response to the risks posed by online spaces, activists encourage digital security practices within the community. Damj published a “Security Guide,” offering advice on digital security and legal protections, as well as health and mental wellbeing. Mawjoudin, an NGO which focuses on community building, also places a priority on digital security. One of the difficulties they face is convincing people to take digital security seriously. As a representative for Mawjoudin explained, “Most people don’t really care about safety or know that it is important.”

Through Instagram posts explaining concepts such as the need for strong passwords, identifying spam, and the importance of antivirus software, the NGO has sought to inform the community about online threats. Mawjoudin also places a very strong emphasis on deleting messages, photos, and videos off personal devices regularly. As documented by Human Rights Watch, Tunisian authorities routinely violate privacy laws when investigating Article 230-related cases, making this step one of the most critical for a community facing prosecution.

Mawjoudin’s emphasis on digital security is also reflected in how it organizes public events. The exact location of an event is never posted publicly, and participants are encouraged to limit their social media activity. Photographs of attendees are never posted without permission, and aside from Mawjoudin’s leadership, names are rarely used in social media.

In contrast, the activist group Shams has repeatedly come under fire for its lack of digital security measures. Shams, which was founded as a Facebook page in 2014 and became an official NGO in 2015, has taken an aggressive stance toward the abolition of Article 230. Its approach, which involved establishing a radio station and an active media presence, has drawn positive international attention but the organization has also sparked controversy within the LGBTI+ community for its “in your face” tactics. According to some members of the LGBTI+ community, Shams has outed multiple community members by posting photos and videos to Facebook without their approval.

Shams gained greater attention in July 2019 when its president, Mounir Baatour, announced his candidacy in the September 2019 presidential election. As the first openly gay presidential candidate in the Muslim world, Baatour received widespread international and domestic coverage. However, a large portion of the Tunisian LGBTI+ community distanced themselves almost immediately. Eighteen different LGBTI+ activists and organizations put together a petition denouncing his candidacy, citing Shams’ policy of outing community members as one of the key reasons for doing so. While Baatour has repeatedly denied claims of forced outing, the role of digital security practices in dividing the community is clear.

The internet and social media have undoubtedly played an important role in the development of a robust LGBTI+ community in Tunisia. However, the use of digital evidence in persecuting LGBTI+ Tunisians and the potential for online harassment and outing highlight the need for responsible digital security practices. For activists in Tunisia, they must strike a balance between raising the issue of LGBTI+ rights in public debate and ensuring the safety of their members.

In the broader Middle East and North Africa region, LGBTI+ individuals regularly face harassment, threats of violence, and legal persecution as a result of their sexual identity. For those living under authoritarian regimes like Egypt, where activism is severely curtailed and the police use apps such as Grindr to entrap LGBTI+ individuals, the situation is even more dangerous. Digital security and knowledge of the threat environment are critical for activists and community members alike. The example set by organizations like Mawjoudin in educating and spreading awareness about online risks continues to play an important role in ensuring the safety of LGBTI+ communities across the region.