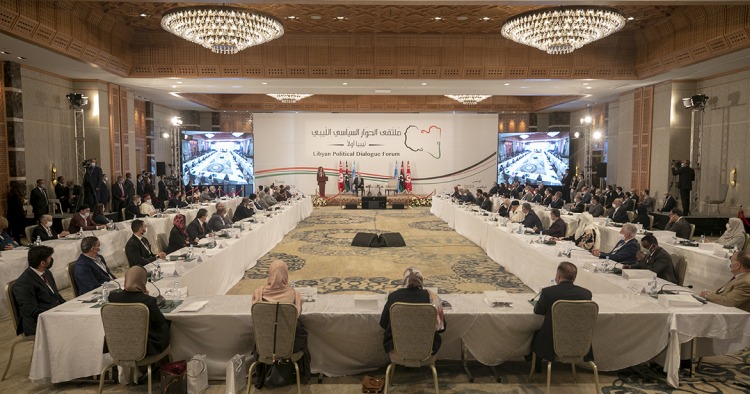 The disruptive presence of competing foreign military forces has been among the sorriest aspects of the mess that has become Libya in the near-decade since the Feb. 17, 2011 uprising that led to Moammar Gadhafi’s overthrow.

The failed effort by Khalifa Hifter to conquer Tripoli and impose a military dictatorship on Libya that began on April 4, 2019 and ended with the withdrawal of his forces from the area around the capital in late May 2020 could not have taken place without Hifter receiving financial and military support from Russia; weapon, logistics, and other military support from Egypt and the United Arab Emirates; weapons from Jordan and Sudan; money from Saudi Arabia; and weapons, military support, training, and intelligence from France, going back to 2016, and likely earlier. And on the other side, the Government of National Accord (GNA) could not have repelled Hifter’s constellation of forces, which included Russian sniper forces supplied by the Wagner Group, without Turkey having also blatantly violated the U.N. arms embargo by shipping in enough armed drones to not only defend against the Russian and Emirati-backed forces, but to counter-attack.

In the process, deepening spheres of influence in Libya — Turkey in the west and Russia, the Emirates, and Egypt in the east — led analysts in recent months to worry whether Libya was heading toward partition.

That would have been catastrophic. Neither Libyan history nor its oil-based economy neatly allow for a partitioned country to thereby become either stable or prosperous. A divided Libya would present an open invitation for terrorists, armed groups, and continuing fights over resources, while making weak successor states dependent on military support from foreigners, thereby ceding control of their country to external patrons.

Taking charge of their own future

But politics, like physics, often follows Newton’s third law, which states that every action produces an equal and opposition reaction. Hoping to avoid a foreign takeover of their country, a growing number of Libyans seem to have finally recognized that progress in Libya required Libyans to take charge of their own future. Accordingly, they are now taking active steps to see if they can forge a political deal to create a new, short-term transitional government to succeed the current GNA created by the Libyan Political Agreement of December 2015, following growing momentum that has already transformed Libya’s security situation with remarkable speed.

Building on a framework established by the Berlin conference on Libya of Jan. 19, 2020, the U.N. Special Mission in Libya (UNSMIL) and its acting special representative of the secretary-general (SRSG), Stephanie Williams, have brokered talks among Libyans participating in the 5+5 Joint Military Commission to develop a set of sequenced confidence building measures. When the 5+5 talks began in Geneva in February, the risk of confrontation over who would control Libya’s central coastal city of Sirte was real. The talks quickly broke down after a second round. Then, after posturing involving a number of the foreign powers, conflict was averted as both sides (Libyan and their external backers) backed off the threats of further use of force. By August, a de facto truce on the ground that began this summer set the stage for a renewal of the 5+5 talks, leading to two further rounds of talks and an agreement reached in Geneva on Oct. 23 for a permanent cease-fire.

The Oct. 23 agreement was significant. It went beyond the cease-fire to agree on withdrawal of all military units and armed groups from the frontlines and the departure of all mercenaries and foreign fighters from Libya by the end of January 2021. And it was swiftly followed by two more rounds of talks in which the sole participants were Libyans.

The decision to “Libyanize” the Libyan talks about the country’s future enabled Libyans to move forward without resolving the many knotty issues of what their patrons might want, such as what it would take, for example, to get Russia out of al-Jufra airbase, Turkey out of al-Watiya airbase east of Tripoli, and the Emirates out of al-Khadim airbase in the city of al-Marj. With the foreign intervenors absent, Libyan military officials representing the previously warring sides agreed not only to work together to enforce the cease-fire, but to establish headquarters for the Joint Military Commission at the hugely symbolic location of the Ouagadougou Conference Center in Sirte, previously occupied by ISIS, liberated by the GNA in August 2016, and then taken by Hifter’s forces on Jan. 4, 2020. By making this much contested site the location for the Joint Military Commission, the Libyan military leaders sent an unmistakable signal to the entire country that they envision a united Libya with open roads for travel from west to east and back again, unimpeded by foreign forces and mercenaries.

The re-Libyanization of Libyan security enabled the National Oil Corporation (NOC) to reopen the country’s oil fields and to restore production to 1.2 million barrels per day — with the funds to be held in reserve by the NOC until an agreement is reached on how they will be distributed, with complete transparency on the formula and mechanics. By mid-November, Acting SRSG Williams was meeting with Libyan security forces from both east and west in Brega, near the heart of Libya’s oil production, to discuss steps to unify security for the oil fields.

Meanwhile, the 75-person Libyan Political Dialogue Forum (LPDF) met in Tunis and on Nov. 15 reached an agreement on a road map to presidential and parliamentary elections scheduled for Dec. 24, 2021, the 70thanniversary of Libyan independence.

The LPDF continues to work on securing an agreement that would create a new interim government to serve for one year ahead of those elections, featuring a prime minister and two deputies, and including a full cabinet to be approved as party of the deal. Acting SRSG Williams has told those involved she will convene the next round of the LPDF promptly to give Libyans the opportunity to agree swiftly on the names of those who would be in an integrated, inclusive new transitional government to manage the country during the short one-year period leading up to elections. Those close to the negotiations say it is just possible that they will succeed even in this most difficult aspect, the naming of names and the conferring of interim power.

All of this work has taken place by shifting the focus from trying to figure out what the foreigners want, to what Libyans themselves want. While the outcome remains uncertain, the opportunity for success is real, if it is not spoiled by bad actors seeking to bribe their way to top positions, by Libyan spoilers who’ve stayed out of the talks, or by the foreigners whose relegation to the sidelines has been central to making progress possible.

Libyans have every right to be skeptical of the leadership capacities of their own political class, who too often have substituted personal agendas for the greater good. But the painful costs of Hifter’s adventurism, the presence of foreign military forces and mercenaries, and the risks of partition, may have prompted Libyan leaders to decide that they are better off dividing up the pie and sharing the pieces among Libyans than having it doled out by foreigners, who would inevitably insist on taking especially large pieces for themselves, leaving Libyans the crumbs.

Jonathan M. Winer is a scholar at MEI and has been the U.S. special envoy for Libya, the deputy assistant secretary of state for international law enforcement, and counsel to U.S. Senator John Kerry. The views expressed in this piece are his own.