Divided over narratives: The new fault line in the Arab World 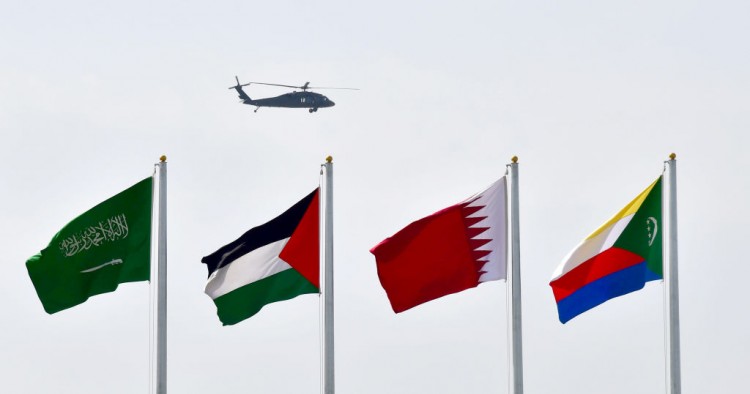 Many of the divisions in the Arab World today are ideological and revolve around narratives — carefully constructed ontological representations of both how the world works and how it is supposed to work conforming to clearly set out interests and values. While the old sectarian narratives might still play an underlying role, what divides Arabs from Morocco to Oman are different grand-strategic visions of the region’s future after the Arab Spring. More fundamentally, this divide — which has split the region since 2010 and the Gulf since 2017 — is an ontological one about how socio-politics ought to be redefined moving forward to provide people with social justice, civil liberty, and prosperity. The narratives that divide the region today are no longer predominately about Sunni versus Shi’a, Arab versus Persian, or Muslim versus Jew; instead, they are about pluralism versus authoritarianism, Islamism versus “counterterrorism,” civilian rule versus military rule, and civil society empowerment versus civil society regulation.

With the collapse of traditional Arab powers following the Iraq War and the Arab Spring, the Gulf states have become the main sponsors of these narratives and patrons of this divide. Unlike the former heavyweights in North Africa and the Levant, the Arab Gulf monarchies have the financial means to spread their narratives, empower local groups, and shape the post-revolutionary reality of the entire region. Out of the big three in the Gulf — namely Saudi Arabia, the United Arab Emirates (UAE), and Qatar — only Doha and Abu Dhabi have been truly consistent with their narrative. For the previous emir in Doha, Hamad bin Khalifa, the Arab Spring was an opportunity to use Qatar’s soft power to subvert the authoritarian ancien regimes and empower opposition groups, many of which were Islamists of some stripe. For the crown prince of Abu Dhabi, Mohammad bin Zayed (MbZ), who has run the UAE’s security portfolio since the 1990s, Qatar’s empowerment of civil society and Islamist opposition groups constituted a threat to regime security in a country where political Islam had gained a local following. What followed in 2011 was a war over narratives, led on one side by Doha’s at times naïve revolutionary activism to topple authoritarians, and opposed on the other by an Emirati counterrevolutionary narrative of “authoritarian stability.”

While this war over narratives has turned hot, it would be inaccurate to portray it as a mere proxy war between Doha and Abu Dhabi. The reason is that although Qatar was initially using direct and indirect surrogates to further its narrative, it has withdrawn from the battlefields since 2014, choosing to engage with partners and opponents more constructively in multilateral fora. Abu Dhabi is thus left with a quasi-monopoly to impose its counterrevolutionary narrative onto the region, exploiting the military as well as informational battlespace.

In 2011, Abu Dhabi had limited means of countering Qatar’s “empowerment of the people” as Doha was riding a wave of liberal optimism that the Arab Spring would quickly deliver on the demands of the people. Doha’s lack of a clearly defined strategic endgame in the post-revolutionary context became obvious when the various factions that had been united against the common enemy of the ancien regime were unable to lay out roadmaps for a new socio-political future. By late 2012, Qatar had lost control of its narrative and its surrogates on the ground in Syria, Libya, and Egypt.

The UAE-supported military coup against Egyptian President Mohamed Morsi in 2013 was the turning point in the Arab Spring, undermining Qatar’s revolutionary optimism and entrenching the UAE’s reactionary authoritarian worldview. With a change of leadership in Doha that same year, Qatar began to withdraw from the battlefield, leaving a void that UAE-controlled counterrevolutionaries were happy to fill. By 2014, Qatar had ceased its material support for rebels in Syria and Libya and surrendered Egypt to the military rule of Gen. Abdel-Fattah el-Sissi. Qatar’s hands-off approach allowing autonomous surrogates to consensually shape the political future of Egypt, Libya, and Syria was met with a zero-sum approach by Abu Dhabi silencing any voices in favor of a pluralistic political status quo. With el-Sissi in Egypt and Gen. Khalifa Hifter in Libya, the UAE had found two proxies that would subvert any consensual and inclusive socio-political process of post-revolutionary state and nation building by imposing military rule under the guise of “counterterrorism” — a de-humanizing narrative that frames any form of opposition, Islamist or secular, as terrorist. Where Qatar had failed with soft power and idealism between 2011 and 2014, the UAE succeeded by applying hard power to bury the achievements of the Arab Spring.

Looking at the Arab world in 2019, Qatar has limited its engagement in the region to routine dealings with central governments, development of bilateral partnerships, and occasional use of soft power to push back against the Emirati and Saudi narrative of “authoritarian stability.” In contrast, the UAE remains invested in matching its counterrevolutionary narrative with surrogate operations in Libya, Egypt, Sudan, and Yemen. Punching above its weight, Abu Dhabi’s uncompromising effort to secure secular, military rule has been rather successful in the short term: Libyan warlord Hifter has closed in on Tripoli, el-Sissi has built the most authoritarian regime in Egyptian history, Generals Abdel-Fattah Burhan and Mohamed Hamdan Dagalo (better known as Hemedti) are consolidating military power in Sudan, and the rebel forces of the Southern Transitional Council (STC) have a firm grip on Yemen’s South — all with the UAE’s material and logistical support. However, in the long run, the UAE’s narrative of authoritarian stability is doomed to fail: Its lack of inclusiveness creates more outsiders than insiders, consolidates exclusive patronage systems, and lays the foundation for further insurgency and uprising.

Hence, while the war over narratives that divides the Arab world might be defined by Qatar and the UAE, the moral equivalency that the media draws between Doha and Abu Dhabi as two sides of a regional proxy war seems oversimplified. The reason is that since 2014, the UAE has stood unopposed on the battlefield as Qatar has withdrawn its material and logistical support for opposition groups across the region. And although Turkey remains committed to confronting the UAE’s strategy regionally, Ankara faces a “say-do” gap between its anti-authoritarian narrative and domestic political developments since 2016. In a region abandoned by traditional Western hegemons, the UAE’s war over narratives has empowered an extensive network of surrogates across the region that might have been able to disrupt civil-societal ambitions for more social justice and civil liberties in the short term, but will fail to force the revolutionary genie back in the bottle in the long term — as the ongoing protests in Algeria and Sudan suggest.

Dr. Andreas Krieg is an assistant professor at the School of Security of King's College London and a political risk analyst working for governmental and commercial clients in the Middle East. He is a fellow at the Institute of Middle Eastern Studies and currently seconded to the Royal College of Defence Studies. The views expressed in this article are his own.