Does a brighter chapter await Sudan? 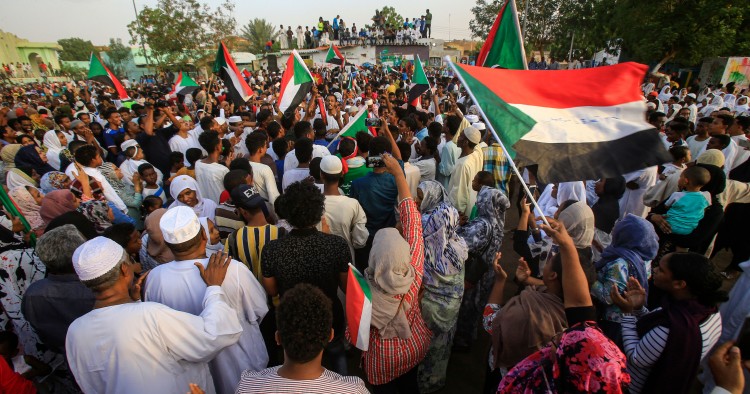 The celebratory scenes in Khartoum last month were a marked contrast from the bloodshed in Sudan’s capital earlier this year. After months of unrest following the ouster of former Sudanese President Omar al-Bashir in April, Sudan’s military council and the Alliance for Freedom and Change — represented by Ahmed al-Rabie — signed a power-sharing agreement on Aug. 17. This deal offers hope that Sudan can complete a peaceful transition to civilian rule.

Sudan’s new leaders, who were sworn in on Aug. 21, make up a transition government led by a sovereign council. This 11-member body is meant to hold power for a three-year-period before elections take place. The council is chaired by Gen. Abdel-Fattah Burhan, who is to serve in this role for the next 21 months before a civilian leader replaces him and is tasked with chairing the body for the last 18 months of its mandate. The original plan was for Prime Minister Abdalla Hamdok, a veteran economist, to pick ministers and announce his cabinet by the end of August, but that has since been delayed.

There is much optimism in Sudan, with many major newspapers putting out headlines hailing the start of a “historic transition to democracy.” Looking ahead, however, these celebrations must be tempered by a realistic assessment of the situation. Unquestionably, the Sudanese people are taking risks when it comes to trusting their military — perhaps best described as Sudan’s “Deep State” — to uphold its end of the bargain in relation to the Constitutional Declaration reached on Aug. 4 after talks mediated by the African Union and Ethiopia. As Dr. Bessma Momani wrote, it is truly a “fantasy” to expect the military to transfer power to civilians.

Sudan’s road ahead will be filled with many challenges. Nonetheless, one cannot overlook the fact that this agreement was the result of the Sudanese people’s resilience and bravery, as well as their insistence on transforming their country from a dictatorship to a civilian-led democratic state. Efforts on the part of the military junta’s Arab allies — Saudi Arabia, the UAE, and Egypt — to push a counter-revolutionary agenda in Khartoum have faced opposition from Sudanese protestors, who recognize Riyadh, Abu Dhabi, and Cairo’s motives for backing Sudan’s military following the coup in April. Put simply, the Arab world’s counter-revolutionary forces have not been able, at least thus far, to create a replica of post-Mohamed Morsi Egypt in Sudan. Indeed, if the agreement signed last month can pave the way for Sudan to enter a period of civilian rule, it would severely undermine the narrative that dictatorship is the natural outcome of Arab peoples’ demands for change and reform.

For this “season of hope” in Sudan to translate into a brighter and more democratic future whereby the rule of law flourishes and human rights are respected, there must be adequate pressure on the new transitional government to take certain steps. Such measures include hold figures accountable for the violence unleashed on protestors in the post-Bashir period, as well as other, older abuses dating back decades. One major concern is that Sudan’s generals could obstruct reform plans over the next 21 months to delay the transition to civilian rule, leaving the military in charge of Sudanese affairs. The charter lacks any benchmarks or enforcement mechanisms to address potential issues with compliance, reducing the likelihood that there will be real accountability moving forward.

Furthermore, it is concerning that the head of the Rapid Support Forces (RSF), Mohamed Hamdan Dagalo, and other members of the sovereign council enjoy immunity. The RSF has much blood on its hands, particularly given the killings of unarmed protestors on June 3, and it is doubtful that those responsible will face criminal prosecution. Ultimately, the extent to which the country’s new leaders, as well as their constituents, take concrete steps to demand thorough and transparent investigations into such crimes will be of significant importance.

The global media is paying a great deal of attention to the status of former President Bashir, publishing photographs of him in a cage awaiting trial. Nonetheless, it would be unfortunate if the theatrics of the former dictator’s situation overshadow the events that will shape the replacement of the Transitional Military Council and the planned 39-month-long democratic transition under the sovereign council. For Sudan, there are grounds to be optimistic that it may be turning the page to a new and a brighter chapter. Yet there is no guarantee that this transition will take place as many hope, nor is there reason to assume that Sudan’s military will not take measures to extend its rule over the country, especially given the interest that some other Arab states have in thwarting a truly democratic revolution in Sudan.

Giorgio Cafiero is the CEO and founder of Gulf State Analytics, a geopolitical risk consultancy based in Washington, DC. The views expressed in this article are his own.

Dr. Khalid al-Jaber (@AlJaberzoon) is the director of the MENA Center for Research in Washington, DC. The views expressed in this article are his own.