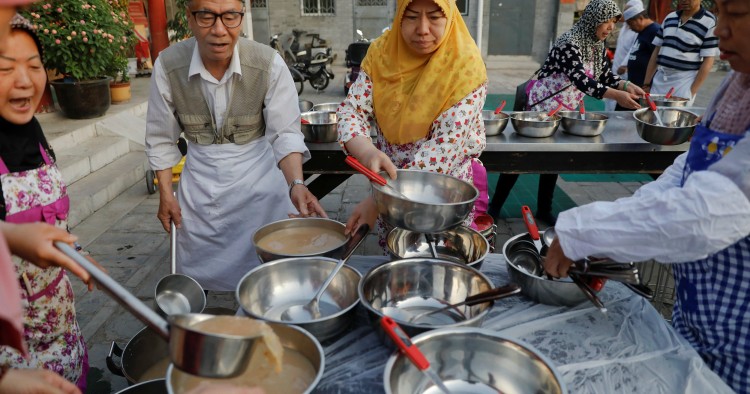 For decades China’s Muslims were alienated from the global Muslim community for political and geographical reasons. In recent years, however, China has become increasingly active in Muslim majority countries through the “Belt and Road Initiative” (BRI), which seeks to foster a China-centric global investment and trade network. Within BRI, Ningxia (a province in central China and China’s sole Hui autonomous region) is emerging as an important center of contact with the Muslim world. In the Communist Party’s strategy, Ningxia's Halal food industry, operated by the Hui Muslim minority community, plays a pivotal role. Government sponsored initiatives include Ningxia’s Wuzhong Halal Industrial Park, which to date houses over 200 companies.[1]

This article explores Chinese eagerness to join and dominate the global Halal market via the BRI. Secondly, it examines why the state selected the Hui Muslims of Ningxia, rather than the larger community of Uyghurs in Xinjiang, to lead Sino-Muslim world trade. This section introduces model minority theory to assess Chinese government policy. Third, the article assesses the potential conflict between the Chinese export strategy with growing domestic resentment toward increasingly visible Halal segregation.[2]

The Chinese government’s ambition to dominate the global Halal market[3] involves the secular Chinese state’s need to gain acceptance from Muslim majority nations for Halal foods made in China. The Chinese State is officially atheist since 1949 and has spent a decade (1966-1976) cracking down violently on all forms of religious expression in China.[4] Even when these restrictions were lifted by President Deng Xiaoping in the 1970s, religious practice was viewed with some suspicion and, as formalized in President Jiang Zemin’s “three sentences” policy, required all religious practice to be loyal to the Communist Party and its ideology. Nonetheless, within the context of the Belt and Road Initiative (BRI), the Chinese central government began viewing Halal food production as a significant chance for boost local economies, particularly in the poorer northwestern part of the country.

As such, Beijing has sought to turn the Ningxia Hui Autonomous Region into a hub of China’s Halal food production through export to Muslim majority countries. China's economic interactions with Muslim majority countries originated in — and now inevitably center on — Ningxia. Ningxia’s Halal food industry, with revenues reaching nearly $700 million a year by 2010[5], also exported over $1 million worth of Halal food per annum to Malaysia, the United Arab Emirates (UAE), Qatar, and Egypt.[6] At the same time, local authorities in Ningxia hope to take advantage of their Islamic roots to reach out to the Muslim world. Thus, the Chinese government permits the Hui to utilize their membership in the global community of Muslims[7]. China still a lacks a national-level Halal certification scheme, which makes it harder to earn international credibility in the global Islamic market.[8] Although, China’s first Halal Foods International Trading Certification Centre was established in 2008 and created the General Provisions of Halal Food Certification in March 2013 (with approval by the China Certification and Accreditation Administration[9]), this standard is used by only just over 100 local businesses. Nonetheless, the certification centre is a promising development, which is bolstered by 20 institutions in 16 foreign countries signing mutual recognition agreements on Halal food standards with Ningxia including Malaysia, Australia, New Zealand (2008).[10]

To understand why the Chinese government accords preference to the Hui minority of Ningxia for its Halal food production and export ambitions, as opposed to the larger Uyghur Muslim minority, it is useful to take a historical view. This historical perspective traces the roots of the Chinese state’s ideological stance towards religious practice and the related production of goods. As highlighted by Israeli (2002) Muslims in Chinese history, especially those who appeared visibly different to the Han majority, were mostly viewed as inherently rebellious and not fully loyal to the Chinese state. As such, the Chinese government has been particularly concerned about ethnic unrest in Xinjiang, which it ties to the presumed disloyalty and propensity for violence among the Uyghur Muslim minority. The government’s concern about the Uyghurs of Xinjiang has often manifested in physical violence by the Chinese security forces and religious and economic repression of Uyghurs. As a result, the Chinese government has equated the practice of Islam among the Uyghur Muslim minority in Xinjiang with terrorism.[11] Due to such perceptions at the level of the Chinese state, Uyghurs have a limited interaction with Muslim majority countries[12] even under the BRI.

On the other hand, according to Wai Yip Ho, Hui people are broadly distributed across several regions and sectors of the Chinese economy. Thus, all over China, Huis are known as the most assimilated ethnic Muslim minority. Chinese government statistics suggest that Hui people are the most economically successful Chinese Muslim minority group as well. The state has thus portrayed them as a “model minority,” especially compared to Uyghurs. Naturally, they are rarely victims of Islamophobia (unlike Uyghurs). In other words, Hui are seen as a “model Muslims” within the Han Culture, which makes them a suitable “cultural ambassadors” for Sino-Muslim world trade.[13] Furthermore, Hui’s ethnical similarity to the Han majority and their internal religious diversity (fragmentation and inchoateness in the form of various sects including Sufism and Salafism with varying levels of piety) make it easier for the Chinese government to tolerate and cooperate with the Hui community. Gladney states that this tolerance makes Huis better at finding an areas of compromise in China’s political system. Hui’s economical attainment[14] and their deep understanding of the Chinese political system appear to make them most suitable to act as intermediary actors for Chinese government initiatives regarding the global Halal Food Market and as a conduit for interactions with Muslim majority countries.[15]

While the export of Halal foods to Muslim majority countries can be regarded a considerable foreign policy success for China, the state’s endorsement of Halal exports ostensibly clashes with rising domestic Islamophobia in response to the growing prevalence of Halal segregation in China.[16] As such, the domestic Han majority take the perceived “Halalification” (清真乏化) of foodstuffs in China as a threat to national harmony.[17] Many Han Chinese expressed a wave of criticism over Halal and non-Halal food segregation by describing such segregation as a cause for divisions within Chinese society. Anti-Muslim rhetoric on Chinese social media platforms such as Weibo and Weixin towards Chinese Muslim minorities is also on the rise. On Weibo, Halal food segregation is taken as a first step towards the potential future radicalization of Chinese Muslims. Many Chinese “netizens” allege that every radicalization starts with a small step. Thus, according to concerned Han bloggers, when Chinese Muslim foodstuff separation becomes too visible, this paves the way for separate seating areas for Muslims. As such segregation risks causing severe damage to the unity of the nation.

So far, the Chinese state has not refrained from any censoring of the Han majority’s public expressions of anger at Chinese Muslims.[18] However, the simultaneous support for a domestic Halal industry may indeed strain domestic social cohesion.

Thus, fundamental questions about the Chinese state’s endorsement of the export of Halal products to the global Islamic market remain. It is uncertain whether, given the Chinese state’s secular ideology, it will take decisive steps towards a national certification scheme of Halal products. Failing the development of a national standard that corresponds to international specifications for Halal products, it is unclear to what extent Muslim majority countries will continue to entertain Halal products originating in the People’s Republic. At the same time tensions between the Chinese state and Uyghurs in the autonomous region of Xinjiang threaten to tarnish China’s reputation within the global Muslim community. Simultaneously, the government risks a domestic backlash from its Han majority, who seem to have largely turned against the “Halalification” of their foodstuffs industries. In fact, China’s international ambitions may amplify anti-Islamic sentiment within the country.

[18] Shik, “Islamophobia in China on the rise fuelled by online hate speech.”