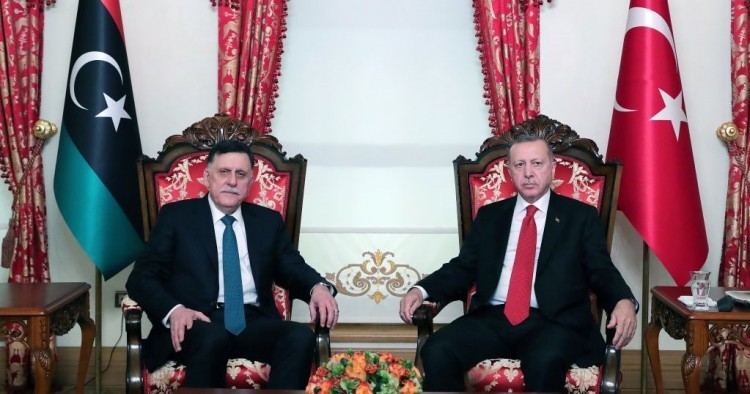 Not too long ago, the Mediterranean was described as “NATO’s lake” — a sleepy backwater in a world dominated by conflict. After the implosion of the Soviet Union, ships of the U.S.-led alliance enjoyed unfettered and uncontested access from Gibraltar to Beirut. The region’s problems centered upon land-based disputes, Israel’s seemingly intractable conflict with Arab states foremost among them.

Today, Israel’s quarrels with Lebanon, Palestine, and Syria are viewed — and minimized — as legacy conflicts, overshadowed by a new and unstable strategic environment centered upon competing visions of offshore energy and security in the eastern Mediterranean.

Who imagined that the 20th century dispute over Cyprus would morph into a 21st century zero-sum conflict over access to undersea gas resources — a competition that divides NATO allies and helps to cement close ties between former enemies?

It was once hoped that energy discoveries around Cyprus would create a new and compelling rationale for cooperation and resolution of the dispute that has long divided the island.

Acrimony, competition, and the creation of competing security and energy alliances, however, now define the contest for access, exploration, and control of this resource, impacting not only Cyprus, but also engaging the entire eastern Mediterranean.

This contest has energized policymakers to establish new mechanisms for asserting and protecting competing visions of national interest from Rome to Athens, Jerusalem to Cairo, and Ankara to Tripoli.

In January 2019, Egypt, Israel, Greece, Cyprus, Italy, Jordan, and the Palestinian Authority established the Eastern Mediterranean Gas Forum to promote regional cooperation on natural gas issues. According to an Egyptian statement issued at the time, the new organization aims to “create a regional gas market that serves the interests of its members by ensuring supply and demand, optimizing resource development, rationalizing the cost of infrastructure, offering competitive prices, and improving trade relations.”

The action was widely viewed as an effort to isolate Turkey and its support for the Turkish Republic of Northern Cyprus, and to limit their access to contested offshore energy resources.

These contrasting views of national interest are solidifying into rival blocs where competing visions of energy and maritime security overlap. On the one hand is the EastMed pipeline project, fortified by a number of bilateral maritime understandings between members. On the other is the memorandum signed by Turkey and the U.N.-recognized Government of National Accord (GNA) in Libya. This agreement represents a strategic leapfrog over the EastMed project. It establishes exclusive economic zones for each country that have been widely rejected as inconsistent with international law.

Turkey’s recent alleged harassment of a French warship, which was deployed off the Libyan coast as part of a NATO mission to prevent arms deliveries to fuel the war in the North African country, adds yet another dimension to the Mediterranean’s burgeoning conflicts.

Paris has been forthright in calling attention to what one French defense ministry official describes as NATO’s “Turkey problem."

French President Emmanuel Macron said he viewed the incident as yet another example of “the brain death of NATO.”

These conflicts are rooted in contrasting maritime visions, but they also reflect competing policies that are moving onshore.

Who could have imagined that Paris and Washington’s decision to topple Libyan leader Moammar Gadhafi in 2011 would result in, among other developments, an emerging military contest between Turkey and Egypt — both of them close allies of the United States — for the uncertain prize of putting the fractured but oil-rich country back together?

The battle for control of Libya’s destiny now features a strategic démarche by Turkey, in support of the GNA, to defeat a working alliance linking Egypt, the UAE, France, and Russia to the self-styled Libyan National Army (LNA) led by Khalifa Hifter.

When Turkey last saw advantage in maintaining a military presence in Libya, Istanbul was still called Constantinople. Egypt, already opposed to the consolidation of a Libyan government indebted to Islamists, views Turkey’s military escalation as a concrete demonstration of Ankara’s intent to isolate Egypt from its strategic hinterland to the west (Libya), north (the Mediterranean), and east (Gaza). Egyptian President Abdel-Fattah el-Sisi has declared a vital Egyptian national security interest in preventing the expansion of the Turkish alliance east of Libya’s oilfields, the port of Sirte, and the airbase at Jufra. This line places fully 60 percent of Libya’s oil reserves under LNA control.

Russia has not been able to translate the race to control offshore gas to its advantage, but it has demonstrated a keen ability to exploit opportunities precipitated by the shortcomings of U.S. policies — in Syria for example and more recently in Libya. Forces associated with Moscow are fighting for the LNA, and Russian and Libyan pilots appear to be training in Libyan skies on newly supplied Russian warplanes.

Washington is not anxious to choose winners in the widening conflicts that increasingly define the region. On June 26, the U.S. embassy in Libya voiced opposition to what it termed a “foreign-backed campaign to undermine Libya’s energy sector and prevent the resumption of oil production,” presumably referring to pro-Hifter forces.

In Libya, as in Syria, Washington would prefer to simply freeze the conflict while limiting Russian efforts to expand its strategic footprint.

“Russia’s sustained involvement in Libya increases the violence and delays a political solution,” noted U.S. Marine Corps Brig. Gen. Bradford Gering, AFRICOM’s director of operations. “Russia continues to push for a strategic foothold on NATO’s southern flank and this is at the expense of innocent Libyan lives.”

Even as antagonists eschew efforts to reach win-win solutions, the costs of the region’s growing polarization continue to grow.

“If we consider a military solution through militarization, this will be the end of Cypriot Hellenism, which I do not want,” warned Nicos Anastasiades, president of the Republic of Cyprus.

Anastasiades stressed that he is seeking a purely diplomatic solution to the geopolitical threat Turkey poses to Cyprus and the overall instability it is causing in the eastern Mediterranean.

Would that other leaders in the region commit to the same strategy.