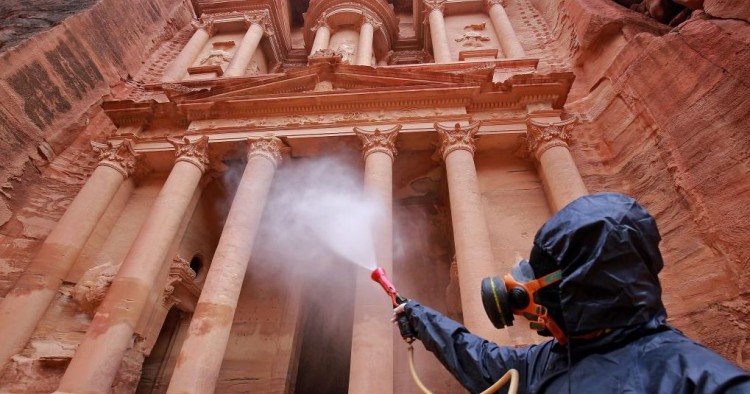 Economies around the world are being battered by two “black swan” events at the same time: the COVID-19 virus and the oil price war between Russia and Saudi Arabia. Naturally, the countries of the Middle East and North Africa (MENA) are also affected, although each in different ways. Those that are net users of energy, which could have benefitted substantially from the vastly lower energy prices, are getting hit hard by COVID-19, while oil and gas producers are suffering from an all-out oil price war made worse by the steep decline in worldwide demand caused by the pandemic.

For a country like Morocco that is very dependent on energy imports, oil prices of around $30/barrel or lower are greatly beneficial, especially for the local population. Furthermore, Morocco is one of the world’s largest producers and exporters of phosphate-based products, which are the country’s main economic engine. Phosphate products require enormous volumes of sulfur (a byproduct of oil) and ammonia (made from natural gas). Thus, the Russia-Saudi price war is a great blessing for Moroccan consumers and for the country’s global competitiveness. That said, Morocco is also highly dependent on tourism, especially as a source of employment. COVID-19 has battered the industry and it will be some time before Western and Gulf tourists come back.

The same holds true for other energy importers in the region. Much like Morocco, Jordan and Tunisia would benefit from lower oil and gas prices, which will help their diversified industries and reduce the cost of living for their people. However, the virus is also a major blow to tourism, which is a very important source of revenue and employment for both countries.

On the other side of the energy scale, countries like Qatar, Kuwait, and Oman, which have very small local populations and are not dependent on industrial exports or tourism, are getting hit by both of the black swans. Their income is in free fall, while they also have to cope with COVID-19. Fortunately, Qatar and Kuwait have substantial financial reserves, which will allow their governments to keep money flowing to the people, and to their citizens in particular. However, foreign workers could suffer a great deal as many projects may be delayed or cancelled, thereby forcing their employers to send them home. A most unfortunate consequence of the crisis will be that a great deal of pain may be inflicted on millions of families in India, the Philippines, Pakistan, Bangladesh, and numerous other countries. With fewer expatriates and lower hydrocarbon income, the economies of Kuwait and Qatar may see strong deflation and a sharp drop in GDP.

Oman has fewer foreign workers than Qatar and Kuwait but will also get hurt. Newly developed gas reserves were just coming on-line and bolstered the declining existing reserves. There was hope that the country was about to make real progress on its industrial development. Furthermore, due to the slow decline in gas and oil income in previous decades, Oman’s budget and cash reserves were under stress, but showing signs of recovery. Now, however, the virus is limiting demand for Oman’s liquefied natural gas (LNG) and affecting prices in East Asia, by far the largest market for Omani LNG exports. Of course, the country will likely delay or cancel many projects. So on top of the possible health problems for its population, Oman’s economy is also likely to face severe stress.

Saudi Arabia too will suffer a great deal. Indeed, it caused the crisis by trying to impose a cut in production on Russia using “shock and awe” tactics, announcing steep price cuts accompanied by a 20 percent increase in production. It has taken a very aggressive approach, offering some types of crude at prices as low as $20/barrel to European buyers in a pandemic-hit market. Saudi Arabia’s strategy is to take market share from Russian producers, who are among the main suppliers to European refineries. Whether Russia will cave in the face of Saudi Arabia’s aggressive tactics and agree to production cuts is difficult to determine. However, one can imagine that Russia's canny and experienced president, Vladimir Putin, will not easily be swayed by the young, impulsive, and inexperienced Saudi leader, Crown Prince Mohammed bin Salman. Saudi Arabia has cash reserves of over $500 billion and can sustain the losses that the price war entails, estimated at $70 billion-100 billion per year, for some time. This will come at a steep cost, however: It will gravely impair the country’s ability to meet its goals under Vision 2030, the kingdom’s long-term economic development strategy, of investing in non-oil-related industries like tourism, mining, and military manufacturing. From Riyadh’s perspective, there might be a silver lining in the fact that its arch nemesis, Iran, and its allies in Iraq will be hard hit by the steep decline in oil income, as well as the cost and burden of dealing with the virus.

The impact of the virus on the Saudi population will be as extensive as it is elsewhere. The kingdom has already suspended all flights out of the country and closed its malls and restaurants. Even the Haj may have to be curtailed, as was already done for the Umrah starting in January. The G20 summit in Riyadh in November may also be in jeopardy. Delays or cancellation of some or all of the events, on which the Saudi leadership has wagered its credibility and global image, would be a significant blow.

With 102 million people, Egypt is the most populous country in the Arab world, and the impact of COVID-19 on the population will likely be great. Its key tourism industry has already been decimated, just when it was beginning to recover from the terrorist attacks a few years ago. The oil price war may be less traumatic for Egypt, however. Its oil and gas production soared in the 1990s, but declined substantially in the 2000s. It even became an importer of LNG for a few years, although the country is now back to having enough natural gas for its own use as well as to restart LNG exports. It also plans to toll gas for Israel for export as LNG, a step toward its broader aim of becoming a regional gas hub. Lower oil and gas prices will help Egyptian manufacturers and reduce energy costs for the people of Egypt, but it will also limit foreign investors’ appetite for investing in Mediterranean gas fields and cut into the profits of tolling LNG for other producers. Just as important for Egypt, the fees earned by the Suez Canal, which had been soaring in 2018 and 2019, may be hurt by the decline in the world economy. However, if Saudi Arabia is successful in taking the European market from the Russians, Saudi oil will use the canal and overall fees will increase substantially.

Oil and services: The UAE

The UAE, like the other oil producers, will suffer from a substantial decline in income. However, Abu Dhabi has significant financial reserves, estimated at more than $1.3 trillion, that will enable it to weather the storm. For its part, Dubai may be hit hard by the decline in the Jebel Ali transshipment industry, tourism, and the demand for the various service industries it provides to the region. Then again, Dubai always seems to thrive on crises in the region and it may end up once again serving as a safe haven for all sorts of people from around the globe.

Finally, the hapless countries that are currently in conflict — Syria, Libya, and Yemen — are unlikely to benefit from the lower cost of a commodity they are using little of, and the little they still produce is declining in value. Most importantly for their populations, the fact that all three have very strained, if not failed, government structures ensures that the virus will hit them even harder than most other countries.

Taken together, the two black swan events are likely to hit the MENA region very hard. The combined effect of the pandemic and the oil price war will rapidly deplete cash reserves and reduce, if not eliminate, economic growth. Furthermore, the socio-economic costs for the region’s people are already high and their suffering great, and both will only get worse in the near term.

Of course, if the pandemic starts to ebb by the summer and Russia and Saudi Arabia come to an arrangement, some projects that have been mothballed may be revived. Optimism may return. Nevertheless, long-term issues like the tensions between Iran and the Arab Gulf states, the intra-GCC dispute, the conflicts in Yemen and Libya, and the ongoing problems between Morocco and Algeria, among others, mean the region will still be vulnerable to sudden, unexpected flare-ups, but these are merely the “normal” in MENA and pale in comparison to effects of the two black swans.

Jean-François Seznec is a non-resident scholar at MEI, a non-resident senior fellow at the Atlantic Council, and an adjunct professor at Johns Hopkins’ School of Advanced International Studies. His focus is on the growth of energy-based industries, such as petrochemicals, aluminum, or steel, in the Gulf. He has 25 years of experience in international banking and finance, 10 of which were spent in the Middle East. The views in this article are his own.