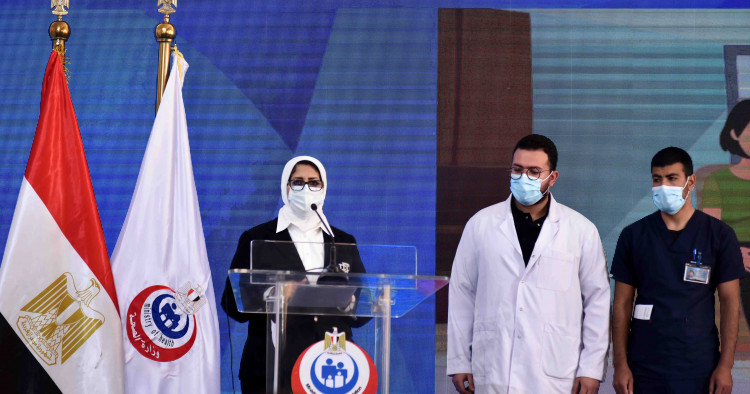 Egypt announced its first COVID-19 fatality on March 8, 2020,[1] a few months after concluding a “reform” program supported by the International Monetary Fund (IMF) loan it had obtained in 2016.[2] The pandemic thus posed the first test for the IMF-prescribed economic and social policies adopted by the Government of Egypt. As this article will show, whereas the reforms helped propel economic growth in a time of global recession, they did not provide a strong social safety net for vulnerable families during the crisis.

Egypt’s reform program focused on tightening the persistent budget deficit, thereby reducing public debt as a share of GDP and taming inflationary pressures. The main policies adopted to get the deficit under control, embodied in a new law approved in 2016, aimed at capping public sector wages and gradually liberalizing fuel and electricity prices.  A few weeks before reaching the deal with the IMF, Egypt’s parliament approved a new law to increase the general rate of VAT tax,[3] as a way to generate additional revenues. In addition, the Central Bank floated the local currency to fight the parallel forex market.[4] In November 2016, the IMF announced[5] its approval of a stand-by arrangement deal to support these policies.

On the social side, the IMF and the Government of Egypt focused on cash transfers to lighten some of the pressures resulting from these “reforms.” Cairo’s adoption of policies to guarantee cash transfers for vulnerable people long predates these latest “reforms.” In fact, such measures date back to 1950,[6] and since then have been amended or replaced by other similar laws numerous times. In recent decades, the Government of Egypt relied on an in-kind and price subsidy system as the principal means of welfare provisioning.

With the liberalization of energy prices and the rationalizing of food subsidies, the government expanded its efforts to shield poor families from the negative economic effects through the use of cash transfers. Launched in 2015 with the support of a $400 million World Bank loan, the expanded cash transfer program consisted of two different schemes — “Takaful” and “Karama” — with a common feature, namely the use of proxy means-testing (PMT). [7] Whereas Takaful is a conditional cash transfer targeting poor households with children, Karama is an unconditional cash transfer targeting the elderly,citizens with severe disabilities and diseases as well as orphans.

In addition, over the past several years, efforts have been made to expand social insurance coverage and increase benefits.[8] A new insurance law was approved in 2019,[9] whose provisions include conditions to guarantee a floor for these benefits. Although this measure might protect the real value of retirement insurance benefits, it is limited by high rates of informality within the labor force.

COVID-19 was the first test of the new economic and social structure established under the “reforms.” With the onset of the pandemic, the government implemented a temporary curfew and limited trade and tourism.

These precautionary measures spurred a significant rise in unemployment in the second quarter of 2020, followed by a return in the third quarter to a near pre-pandemic level.[10] However, a closer look at the data shows that the negative consequences of Covid-19 were not limited to unemployment during the curfew, but also included reduced wages and working hours, which could sustain for a longer time because of slowing growth.

A survey published in June 2020 by CAPMAS,[11] the country’s official statistical authority, tracked various effects of Covid-19 on Egyptian households. The study found that incomes of 73.5% of the sample had fallen since the onset of the pandemic, and that as a result, many families had to reduce their consumption of costly food items such as meats and fruits. In October 2020,[12]  CAPMAS reported that pressures on workers had decreased, but still more than half of the sample suffered from enforced changes in their working conditions.

Unemployment could push many families into poverty. Although Egyptian insurance laws have been on the books for decades,unemployment benefits, practically speaking, ha not been implemented widely, if at all. In addition, average unemployment rates do not reflect the chronic unemployment among women, which rose during the curfew and then declined, but remained at higher levels compared to men. In the second quarter of 2020, during which stringent lockdown measures were in place, women’s unemployment was nearly double that of men. In the third quarter, women’s unemployment was almost three times that of men. Even if many of those driven into joblessness during the pandemic were able to find new work, this does not necessarily mean they will be protected from poverty. A large proportion of the Egyptian labor force suffers from low incomes. This situation could worsen when the pandemic abates.

Last February, a research unit of the American University of Cairo launched an index to assess the quality of work conditions in Egypt. The index revealed that the percentage of Egyptian workers deprived of an adequate income had increased between 2006-2018 from 55% to 73.3%.[13] Although CAPMAS has yet to publish figures about poverty rates during the pandemic, its most recent data revealed that the poverty rate had dropped from 32.5% in 2018 to 29.7% in October 2019–March 2020.[14] A prominent Egyptian expert, however, noted that these latest figures nonetheless show the poverty rate still 2% higher than in 2015, when the “reform” program began. The same expert pointed out that the latest household data showed an increasing tendency toward not sending children to school.[15]

The Role of Cash Transfers

Under the severe pressures created by Covid-19, the cash transfers policy was one of the main tools to protect families from falling into poverty. However, the nominal value of cash benefits did not rise during the crisis, though many families were forced to rationalize their  consumption to adapt to declining incomes, as CAPMAS data showed.

Indeed, the cash transfer schemes, from their very inception, had no obvious rules to determine the nominal value of these benefits. In instances when cash transfer increases were authorized, they were not linked directly to the inflation index. The nominal value of Karama is 450 EGP, but the income needed to be protected from falling below the poverty line is 857 EGP per month.[16]

Poor families face numerous challenges availing themselves of these meager cash transfers. Many are not aware that such benefits exist or whether they qualify for them. Furthermore, the income threshold to qualify is astonishingly low. A father employed with a regular monthly salary of 1600 EGP (without insurance) does not qualify for Takaful benefits to support a family of four.[17] This might explain the number of families receiving this assistance is estimated at about 3.6 million[18] of the nearly one-third of the nation’s 100 million people who are languishing in poverty.

After the lifting of the lockdown, the Government of Egypt approved new temporary assistance with a nominal value of 500 EGP per month targeting mainly irregular laborers not covered by the insurance system. The cost of this temporary assistance to the budget was not significant (i.e., around 800 million of the 100 billion EGP emergency expenditure was targeted to support business).[19] Many experts regard the measure as having helped in softening the crisis effects.

The temporary assistance measure also had the unintended effect of focusing attention on the vulnerabilities of irregular workers, especially those working in the construction and real estate sector, who are most exposed to unemployment risk.

Since the 1990s, at which time Egypt began adopting neoliberal economic policies, the state began to withdraw from its role as an employer, leaving it to the private sector to create jobs without weighing on public budget deficits. However, many of the jobs subsequently created by the expanding private sector have proven to be unstable. According to the Market Panel Survey (ELMPS), the public sector’s share in employment declined between 1998-2018 from 39% to 26%, while the share of informal private jobs increased, from 11% to 16% inside establishments and from 13 to 23% outside establishments.

In the process, the Egyptian economy has undergone a structural transformation that Assaad et al. claim is indicative of “substantial deindustrialization.”[20] The authors note that these structural changes have “resulted in the disproportionate growth of informal employment outside fixed establishments, which is one of the most vulnerable forms of employment in Egypt.”[21] According to the International Labor Organization (ILO), informalization dominates the labor market in Egypt, with irregular workers accounting for 63.3% of total jobs.[22] The Covid-19 pandemic jeopardized the lives and livelihoods of a far greater proportion of the nation’s population than many realize. Most had no guarantee of social protection then, nor are they likely to in the next crisis without further policy changes.

2015 marked the first year of a return to pre-2011 growth levels following a period of political instability that weighed on the economy. Egypt’s annual GDP growth roughly doubled the population growth rate.[23] Although growth declined from 5.6% in 2019 to 3.6% in 2020 due to the pandemic, Egypt was the onlyoilimportexpanded during that time.[24] Yet, despite the narrative by the Egyptian government touting this achievement, the evidence makes clear that poverty and inequality worsened as growth slowed.

Egypt’s “reform” program focused on fiscal and monetary targets such as rationalizing public social expenditure and floating the local currency was not accompanied by adequate reforms in social and labor policies.

The reforms succeeded in curbing the public budget deficit. But the cash transfer schemes instituted to shield the poor from the adverse effects of austerity failed to reach many of them, and provided only mild relief for those who qualified for such assistance.

The COVID-19 pandemic pushed the government to adopt a new temporary policy to expand cash transfers to informal workers, a measure that though welcomed by experts, at the same time shed light on the problem of increasing informality in a labor market that is badly in need of structural change beyond such temporary palliative measures. Indeed, the sheer scale of this informality reflects the deindustrialization of the economy, which not only threatens the sustainability of economic growth, but increases the risk that the growing number of informal workers and their families will be pushed into poverty during the next crisis.

[8] Law No 60 of 2016 for increasing pensions and amending some provisions of social insurance laws.

[12] CAPMAS, “Analyzing COVID 19 effects on Egypt households from the beginning of the epidemic until September ” (in Arabic), October 2020.