The Egyptian Culture in Spoken Language

The spoken word is the bearer of culture. Common expressions in daily use by ordinary people are not only the means by which they communicate with each other, but are the essential elements of a society bound together in time and place. The continuous injection of new vocabulary and forms of expression into the everyday spoken language further enriches and at the same time alters it. With the passage of time, a new “generation” of idioms and colloquialisms displaces the old. Yet, though displaced, these time-bound layers of language are nonetheless important remnants of culture — parts of the cultural heritage worth preserving. 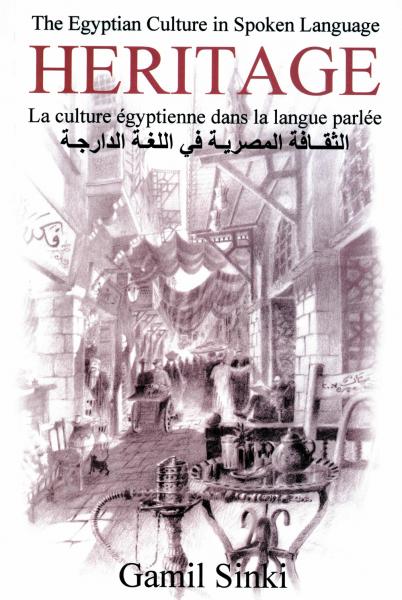 The Impact of the Verbal Quotations in Preserving a Culture

I was born and raised in Egypt, and Arabic is my mother tongue. I left Egypt in the mid-1960s. Were I to return, I would find a huge gap between the current street language and the one used a half-century ago which I still employ. The moment I would open my mouth to ask a taxi driver to take me somewhere, he would immediately identify me as a “stranger” living abroad. After a short chat with him, he would be able to tell how long I had been away. This is mainly due to both my use of a “dead” vocabulary as well as my complete lack of knowledge of the one that has replaced it.

However, isn’t this seemingly “dead” vocabulary part of Egyptian culture? And if so, should it not be regarded as such and preserved? I was led to answer “yes” to both of these questions following an encounter with an anthropology professor in a small American Indian village near Shefferville in northern Quebec. This professor had a mandate to restore an ancient dialect and language of a tribe which had vanished over the years. He spent more than five years working with the few living members of the tribe still faithful to their heritage in order to collect and gather all that was left of a culture and preserve it. Fearing that my heritage could one day be forgotten, I have set out to preserve the portion of it that I mastered and have retained since my youth in Egypt more than a half-century ago. I seek to identify in this essay some of the ways in which the spoken word serves as a vessel and a vehicle for transmitting important aspects of Egyptian culture across time and space.

Characteristics of Egyptian Culture Revealed in the Spoken Language

1: Egyptian culture is inclusive. We can witness the influence of various cultures in the Egyptian spoken language, such as the Arabic, Coptic, Turkish, Persian, French, English, Italian, and Greek.

2: Egyptian culture is figurative. Numerous Egyptian expressions refer to cats, dogs, and donkeys, as well as many other animals, birds, and insects. They also refer to varieties of fruits, vegetables, and foods. A third major category of expression refers to parts of the human body such as the eyes, heart, tongue, foot, beards, teeth, cheek, throat, fingers, and many others. A fourth important category includes construction materials and household articles, such as doors, windows, stones, walls, floors and floor covering, tiles, jugs, needles, and spools. 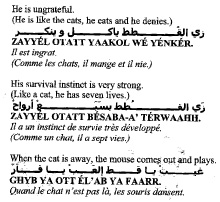 3: Egyptian culture is suffused with spontaneity. There are plenty of terms and popular proverbs that are spontaneously and instinctively inserted in the daily spoken language. These terms are like spices that give a special taste to speech and describe a situation or a given incident in a caricature-like way. This is why to the extent that we remember and are aware of a language’s expressions and master their use at the appropriate time, it is possible to say that we are from the core of this language’s society.

5: Egyptian culture is fundamentally verbal. Verbal learning is an essential characteristic of Arabic culture, which is a main feature of the Egyptian one. It is inherited from the liturgical chants (Syriac, Byzantine, and Islamic) which is musical to the ear and rhythmic. 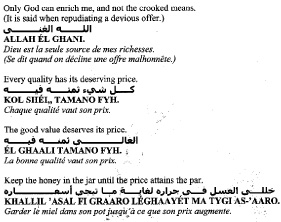 6: Egyptian culture is steeped in reptition. Repetition, which is rooted in Arabic culture, makes the expressions part of the collection of the experiential stock of life. Repetition is an important factor that helps children to absorb common expressions. As the saying goes, “The repetitive rehearsal instructs anyone, even the illiterate.”

7: Egyptian culture is replete with the unique. Many words in spoken Egyptian are jargon that could not be translated to another language with an equivalent one word. Rather, an explanation in the form of a paragraph is usually needed. A number of these words and expressions have Coptic or Turkish roots.

8: Egyptian culture is redolent with history. Numerous words and expressions refer to specific historical figures. Such words and expressions are used to characterize a person as being, for example, generous, courageous, or intelligent. Some of these expressions are in poetic forms and said by legendary figures that played important roles (political, religious, intellectual, social, or philosophical) in Egyptian or Arab history.

9: Egyptian culture reflects the importance of spirituality and faith in society. These expressions refer to the Qur’an or the Bible and could also refer to biblical figure like Job and his patience.

10: Egyptian culture is saturated with humor, whether in the form of expressions that could serve as bumper stickers, cartoons that describe social or political situations, or well-known proverbs deformed by replacing one or more words.