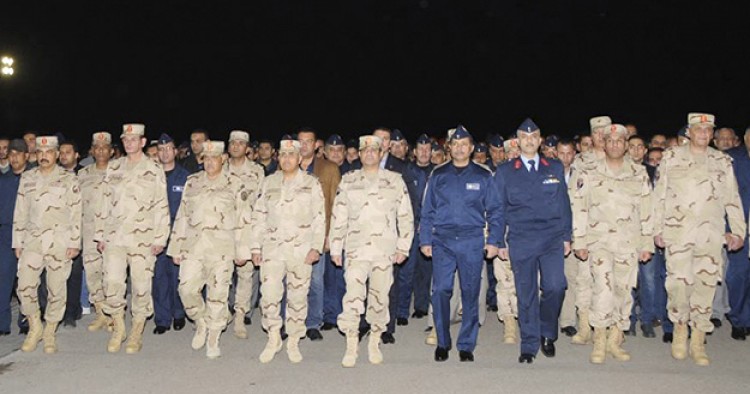 Egypt’s new constitution grants the country’s generals greater autonomy and an increased formal political role.[1] The draft authorizes military trials for civilians (Article 204) and ensures that the military’s budget be beyond civilian scrutiny. The most significant change is that the Supreme Council of the Armed Forces (SCAF) will have the final say in choosing or dismissing the defense minister for two presidential terms (Article 234).

It is true that the new constitution will create what Tharwat Badawi, a constitutional expert, has called “a state above the state.”[2] But the 2012 constitution, written by a Muslim Brotherhood-dominated panel, also granted the generals wide autonomy as well as significant powers. Nevertheless, Egypt’s generals toppled Mohamed Morsi and cracked down on the Brotherhood. It is not the formal military role that has been most crucial in maintaining the institutionalized hegemony of the authoritarian Egyptian regime but, rather, the informal channels of influence, particularly in the economic sphere, that have helped Egypt’s military to maintain and consolidate its power.

After the 1979 peace treaty ended the state of war with Israel, Egyptian leaders realized that dismissing thousands of well-trained army officers would be a political nightmare and were therefore reluctant to do so. Aiming to produce goods not only for the military but also for civilian needs, they created military enterprises under the auspices of retired generals and colonels. Consequently, the Egyptian military’s activities have not been limited to matters of national defense and some political maneuvering. The generals’ business endeavors have acted as a catalyst for economic expansion with widespread authority across many sectors.[3]

Some scholars estimate that the military’s economic stake is about a third of the Egyptian economy.[4] In addition to producing military supplies, various military institutions own 35 factories that produce vehicles, chemicals, mineral water, cement, consumer goods, and various types of food including pasta, bread, and olive oil. These military organizations, namely the Arab Organization for Industrialization, the Ministry of Military Production, and the National Service Products Organization, were also named on lists circulating in Egypt in 2011 as owners of service-industry companies, restaurants, gas stations, and construction services. The military-owned enterprises not only enjoyed privileges in the form of subsidies and tax exemptions but were also above the rules and regulations applicable to other privately owned companies.[5] There have also been claims from a number of Egyptian activists that laborers for these construction services were drawn from conscripted military ranks.[6]

In the years following 1991, when President Hosni Mubarak initiated the extensive privatization of public sector economic enterprises, the military (or “Officer’s Republic,” as Yezid Sayigh termed it) dominated state institutions, becoming more and more involved in economic activities. Mubarak, according to Sayigh, promised a “loyalty allowance” upon retirement to loyal senior officers as recompense for their agreement to stay away from politics. This allowance also compensated for the low wages earned by senior officers during their time in the military. For many of these men, this meant a job in the state sector with perks and allowances in addition to a salary, which was a welcome supplement to their military pension.[7] Therefore, retiring senior officers were given leadership positions within government offices or state-owned companies. For instance, after the July 3, 2013 military coup, of the 25 provincial governors that the military-backed government of General Abdul-Fattah el-Sisi appointed, 17 were military generals and two were from the police force.[8]

Being well-connected within the military helped many officers to make use of resources within the civilian economy and enjoy an elevated social standing. This small group was able to widen its networks, gain further experience, and increase its chances of securing enviable positions after retirement. The highest ranking officers and those most loyal to Mubarak were the ones in a position to become members of the boards of directors in state-owned commercial enterprises.[9] These comfortable and secure positions promised substantial financial gains as payment for their continuing allegiance to Mubarak. This elite military group constituted one of the most effective parts of the president’s power base.[10]

Although Mubarak was removed from power, the generals’ hegemony has continued. Yet the generals confronted a major challenge in the ascendancy of the Brotherhood, which sought to gain a foothold in the economy. By encouraging a free market and economic competition, the Brotherhood aimed to strengthen its ties with the business sector in order to expand its network beyond Islamic groups. This new thrust represented a direct threat to the military’s long-term interests.

After the parliamentary elections of November 2011 and January 2012, the Brotherhood approached both Egyptian and foreign businesses. Khairat el-Shater, a prominent Brotherhood member, gave a speech to the American Chamber of Commerce in Egypt, discussing the need for a continued solid economic relationship with the West. He also discussed the strains on government finances of various ongoing projects, specifically those relating to roads, water, and electricity, and the consequent need for private investment.[11] Despite calls within the Muslim Brotherhood for the adoption of a socialist and egalitarian strategy, el-Shater was able to quell the dissenters, reassuring the international community of the Brotherhood’s resolve to adhere to free-market capitalism.[12]

In addition, for the first time in the Brotherhood’s history, it attempted to establish a powerful economic organization that could significantly increase the economic influence of its members. It strove to offer a forum to articulate its members’ concerns and demands, aiming to bring the excluded Islamists to the center, thus changing the military-civilian relationship and breaking down the economic hegemony of the military. In February 2012, Hassan Malek, a wealthy Brotherhood businessman, established the Egyptian Business Development Association (EBDA). This new association included notable Islamist businessmen who shared the goal of reaching beyond the existing Brotherhood ranks.[13] Although the EBDA denied being an organization exclusive to the Brotherhood, several Brotherhood businessmen, including Safwan Thabet of the Juhayna Group and Mohamed Mo’men of the Mo’men Group, occupied positions on its board of directors.

The EBDA wanted not only to encourage investment and increase economic development throughout Egypt but also to strengthen and aid small and medium-sized enterprises (SMEs).[14] According to Hatem Saleh, Minister of Industry and Foreign Trade, the Brotherhood-dominated government allocated 20 percent of state land for industrial investment projects to SMEs. In addition, the state planned to help SMEs by providing technical support, training programs, and necessary funding.[15]

The experience of the Turkish Justice and Development Party (AKP), particularly its support of SMEs and the country’s resulting economic vitality, provided an attractive model of economic policy for many middle-class Brotherhood members.[16] Despite the fact that Egypt does not have the same strategic economic model, the Brotherhood looked with appreciation at the way Turkey’s religious bourgeoisie had created robust centers of industry that power the economy in various Anatolian towns, including Gaziantep, Kayseri, and Konya. This enabled the AKP to increase its share of votes in three consecutive elections, from 34 percent in 2002 to 46.6 percent in 2007 to 50 percent in 2011, to mobilize the periphery, and, most importantly, to start a process of deconstructing the old regime and creating a new one. The AKP gradually replaced the old regime’s power resources and constituted itself as an alternative while weakening the military’s despotic power. This was a first step in the reorganization of state-society relations and the reshaping of modern Turkey.

By empowering the SMEs, the Brotherhood aimed to 1) penetrate the economy from below; 2) challenge big capital and its dominance in the economy; 3) play a crucial role in Egypt’s economic development; 4) open opportunities to those excluded during Mubarak’s era; and 5) cement the Muslim Brotherhood’s control over the economy and other sources of power.

The Brotherhood also attempted to shift investment away from the centralized zones of Cairo and Alexandria; this was perceived as a direct threat to the military’s historical area of interests. One of the efforts to move investment out of these centralized zones could be seen in the Suez Canal Corridor project (SCC), which was controlled through private-public enterprises. The SCC would focus on the development, by 2017, of Suez, Ismailia, and Port Said, Egypt’s three canal governorates that are considered key strategic areas by the army. One of the various large-scale projects included in the initiative was that of “Technology Valley” in Ismailia. It would include, in addition to hosting a number of technology programs, the building of a new tunnel connecting the central Sinai Peninsula with the west bank of the Suez Canal. Furthermore, an industrial zone and a major Mediterranean seaport would be constructed to the west of the Gulf of Suez and in east Port Said, respectively. The Egyptian cabinet predicted that Egypt would draw an estimated $100 billion in investments and attract one million jobs to the region as a direct result of this project.[17] The military generals strongly opposed the proposal, realizing that they would be increasingly marginalized and would lose some of their uncontested privileges as a result of being increasingly challenged by a strengthened Muslim Brotherhood.[18]

Egypt’s generals thus did not welcome any measures that constituted a threat to their political and business interests, including efforts to bring about further political and economic liberalization. The military had widespread influence across many sectors of the economy and political networks, and the senior officers wanted to maintain the benefits and entitlements that they had historically enjoyed. Consequently, the elite and civilian-military bureaucracy did what they could to topple Morsi.

Any reform process, therefore, should focus not only on the legal and institutional framework but also on the informal mechanisms through which the officers of the Egyptian military exercise influence, such as in the economic sector. In the long term, elected government representatives will have to challenge and remedy the pervasive influence of SCAF throughout the political and economic realms. The military will continue to influence economic and administrative functions of the government unless its power is effectively dismantled. If left unchecked, the military’s power will also be used to impede the effectiveness of any future president and government that it does not support.

It is clear that SCAF will not relinquish its power easily. Expressing its intention to defend itself, it has cautioned against any attempts to challenge its status. It is certainly not demonstrating any intent to retreat, having imposed conditions in the new constitution that will assure its permanent military guardianship. Under such a framework, civilian authorities will be unable to introduce policies independently and thus will be powerless to effectively address the social, economic, and political challenges facing Egypt. With the military’s ability to constrain effective change, persistent instability will likely occur.[19]

This article is based on the author’s doctoral research, under the supervision of the late Christoph Schumann, which focuses on the ideological transformation of the Turkish Justice and Development Party and the Egyptian Muslim Brotherhood.

[7] Yezid Sayigh, “Above the State: The Officers’ Republic in Egypt,” The Carnegie Papers, Carnegie Endowment for International Peace, August 2012, 4, http://carnegieendowment.org/files/officers_republic1.pdf.