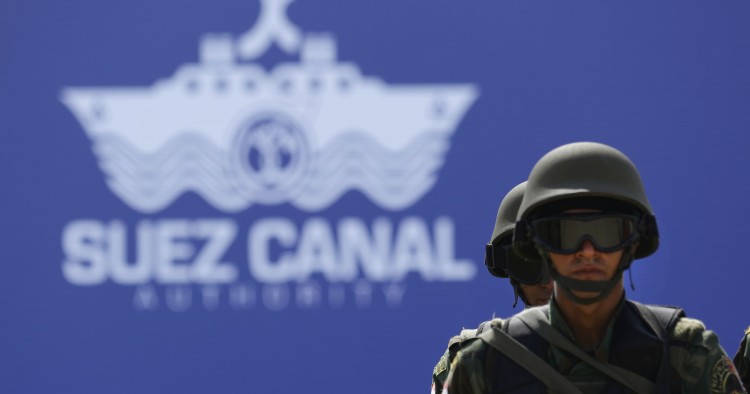 In today's Egypt, you cannot miss it: the heavy presence of the military institution in the economy. The Egyptian military owns business enterprises that are in almost every sector and produce an extremely wide area of services and goods. It runs hotels, sea resorts, and apartment buildings along with lavish villas. It owns cement, steel, jeep, fertilizer, home appliances, pasta, and other factories; runs gas stations; and constructs toll highways. Moreover, ex-generals occupy the top civilian positions in the state’s administrative apparatus in control of key sectors, from public transportation systems to water and sewerage services, Internet lines, social housing projects, and more. This situation is far from being a new phenomenon that emerged with the election of a new president from the military last year; its entrenched roots go back to the last six decades of the country’s history.

The long history of military dominance in Egypt began in 1952, with the formation of the first military-led regime in the post-colonial state by Colonel Gamal Abdel Nasser. But the more recent history of this process goes back to the 1990s and 2000s. As then-President Hosni Mubarak—himself a former air force officer—embarked on liberalizing the Egyptian economy, he allowed officers to convert large segments of the defense industry to target the civilian consumerist market and also create new business ventures. Moreover, Mubarak appointed an ever-increasing number of retired generals in top administrative positions in the government during the same period. Applying neoliberal economic policies throughout these two decades pushed Mubarak to cut public spending, including in the military budget. In order to appease the officers and “coup-proof” his regime, he granted them extensive business privileges that enabled the military to create a vast business empire that enjoyed superior access to state land, had exceptional tax breaks, circumvented labor rights, and functioned outside of public accountability either by the parliament, government auditing agencies, or civilian courts.[1]

When the Egyptian military decided to invest in economic enterprises three decades ago, it was following an already spreading global trend then where the militaries of many states such as Russia, China, Brazil, and Pakistan developed business interests. The end of the Cold War rendered the market economy a global model for all former socialist and post-communist states to follow, and economic liberalization measures required substantial cuts in public expenditure— including in military spending. Many transforming regimes allowed their military institutions to create business enterprises that compensated for their financial losses and helped avoid officers’ mutinies. Thus, the phenomenon of military business, or “Milbus,” was born as a means to appease the military and coup-proof liberalizing governments.[2] The Egyptian military joined this trend. However, as military business distorted market reforms, turned into burdens on economic development, and increased the political influence of the officers, another trend toward divestiture soon emerged— but Egypt has not yet joined it.

An early and prominent example of a state that succeeded in divesting its military of business is China. The People’s Liberation Army created commercial enterprises during the economic reform period in the 1980s, and the civilian leadership already ordered it out of business by the end of the 1990s. The PLA’s gigantic business conglomerates enjoyed tax breaks and other perks and were marred by corruption, smuggling, and profiteering problems. The ruling communist party launched a divestiture campaign in 1998, and the PLA immediately responded by giving up most of its enterprises.[3] Another successful example in Latin American is Argentina, where its military liquidated its business in the mid-1990s. Argentina’s military business similarly suffered from corruption and inefficacy, and the state privatized them after transitioning to democracy and neoliberalism.[4] Indonesia, on the contrary, was an unsuccessful case. The Indonesian government’s measures for divestiture in the 2000s failed to dismantle the military business empire, along with a failed attempt at civilian control of the armed forces.[5]

It seems highly unlikely that the Egyptian officers today would respond to calls for divestiture, especially under a president who might place no pressure on them to do so. Recently, the Egyptian military has rejected public criticism of its economic activities. In a press conference in 2012, the vice minister of defense for financial affairs and SCAF member, General Mahmud Nasr, pledged to “fight” to protect the armed forces’ business. Nasr asserted, “our money does not belong to the state; it is the sweat of the ministry of defense from the revenue of its enterprises…We will not allow the state to intervene in it…We will fight for our economic enterprises and we will not quit this battle. We will not leave our 30-year sweat for somebody else to ravage it, and we will not allow anybody to come near the armed forces’ projects.”[6]

Indeed the extensive military involvement in and influence over the Egyptian economy might be hard to reverse.  Throughout the 1990s, the Ministry of Military Production converted 40 percent of its production lines to civilian commodities, and 70 percent of the production of the arms factories of the Arab Organization for Industrialization became civilian.[7] Military factories that used to manufacture missiles, aircraft, or rockets were now heavily utilizing their facilities and labor to produce consumer goods such as washing machines, auto parts, fridges, TVs, fans, kitchenware, computers, and more. In the 2000s, the military embarked on new for-profit ventures, such as opening new factories for capital or consumer goods; reclaiming hundreds of thousands of acres of commercial farm lands; and constructing toll highways to monopolize their daily fees. This was the time in which Mubarak was grooming his son Gamal to succeed him as president, and he needed to further appease the officers. Within an accelerated wave of privatization, the military acquired many of the privatized state-owned enterprises, such as a railway wagons manufacturing plant, a shipyard company, and later a car factory.[8]

Furthermore, Mubarak appointed retired generals in numerous administrative positions in control of the country’s liberalized economy. Generals coming from the ground forces were mostly appointed governors of provinces, mayors of small towns, or heads of both wealthy and the poor but highly populated districts in Cairo. When Mubarak abdicated power in 2011, he left behind 14 former generals appointed as governors of Egypt’s 28 provinces. Military engineers dominated the ministry of housing and its various authorities, mainly responsible for allocating state land and construction of housing. For example, formr generals headed the public authorities in charge of cooperative housing and land survey. Ex-air force pilots controlled the civil aviation sector, from the position of minister to chairman of affiliated holding companies. Lieutenant General Ahmad Shafiq had served as the minister of civil aviation for almost a decade prior to Mubarak’s abdication. Ex-navy rear admirals and admirals controlled the maritime transport sector as they were appointed heads of all the country’s sea and Nile ports, as well as chairmen of government authorities of maritime navigation and safety and relevant state-owned holding companies. In addition, the Suez Canal Authority has been headed by ex-vice admirals for the past 20 years (i.e., Vice-Admiral Ahmad Fadil headed the Suez Canal from 1996, until Vice-Admiral Muhab Mamish succeeded him in 2012)..[9]

When the 2011 uprisings broke out, a public attempt at demilitarizing the state quickly failed. After Mubarak stepped down, the long-entrenched system of military privileges almost fell apart. The same protests that deposed the aging dictator soon targeted the militarization of civilian spaces in the country. The Supreme Council of Armed Forces (SCAF) assumed power after Mubarak, but it soon faced a sweeping wave of labor strikes and sit-ins targeting generals managing businesses or occupying civilian offices to demand denied rights or call for general demilitarization. SCAF deployed military police to disperse sit-ins or crush protests, and issued an anti-strike law (Law No. 34, 2011) that sent many protesting laborers to military trials and jail.[10]

The Muslim Brotherhood’s elected president, Mohammad Morsi, maintained the privileged status of the army in the bureaucracy, by hiring ex-officers as ministers, governors, and as other top administrators. The Muslim Brothers granted the military a semi-autonomous status in the constitution that they issued in December 2012. This constitution kept the military budget—even pertaining to revenue from civilian businesses—above state oversight and public scrutiny. Furthermore, SCAF expanded its business empire more during this period. For example, the Brothers-dominated parliament transferred the property rights of a state-owned car factory to the Ministry of Military Production.[11]

Several months after he was elected president, Abdel Fattah al-Sisi held an international economic conference to declare the country open again for foreign investments. It was a big gathering to which the government invited important world leaders, including the IMF’s director Christine Lagarde. At a packed hall, Lagarde praised the reform process that the president had initiated and that included reducing energy subsidies and raising taxes on cigarettes and alcohol. She enthusiastically declared that Egypt’s “journey to higher growth [has] started.”[12]

But under president Sisi the number of ex-generals appointed to key positions in the administration and the ever-increasing privileges of military businesses are distorting the free market and hindering reforms toward more neoliberalism. In 2015, to name only a few instances, ex-generals headed the public authorities of industrial development, agricultural development, import and export control, maritime transport, railways, sea and Nile ports, and the Suez Canal. The crucial positions of the minister of transportation, the chairman of the national Telecommunication Holding Company, and the chairman of Maritime and Land Transport Holding Company were all occupied by other ex-generals. Meanwhile, military contractors continued to function as gigantic parastatal entities that took charge of executing public construction projects of bridges, roads, hospitals, schools, affordable housing, sporting clubs, etc.

Around the same time, the military obtained 10,000 acres for land reclamation and commercial farming, and another total of 40,000 square metres to build additional gas stations.[13] The president issued a law to exempt a list of 574 military premises from the real estate tax, and this list included supermarkets, hotels, sea resorts, and movie theatres. He issued another law to authorize the ministry of defense to establish private security firms, and a third law authorizing the ministry of military production to open its own contracting firm.[14]  Critics argue that ex-officers lack business management expertise and that their prevalence harms the economy.

Civilianizing Egypt is to a large extent a “business matter.” Divesting the Egyptian military of its business enterprises is an essential requirement for civilianizing the state. The entrenched economic interests of the military institution provide it with both incentives and resources to uphold political hegemony. If the Egyptian military is divested of commercial activities, it will be following a global trend that many other militaries have lately adopted.

As the Egyptian state today faces one acute crisis after the other, taking the Egyptian military out of the economy seems more necessary than ever. Whereas the expansive economic privileges of the army currently render this an impossible process, simmering public discontent might push for military concessions in the near future.

[3] Tai Mig Cheung, “The Rise and Fall of the Chinese Military Business Complex,” in Brommelhorster and Paes, The Military as an Economic Actor, pp. 52-73.

[4] Thomas Scheetz, “Military Business in Argentina,” in Brommelhorster and Paes, The Military as an Economic Actor, pp. 18-31.