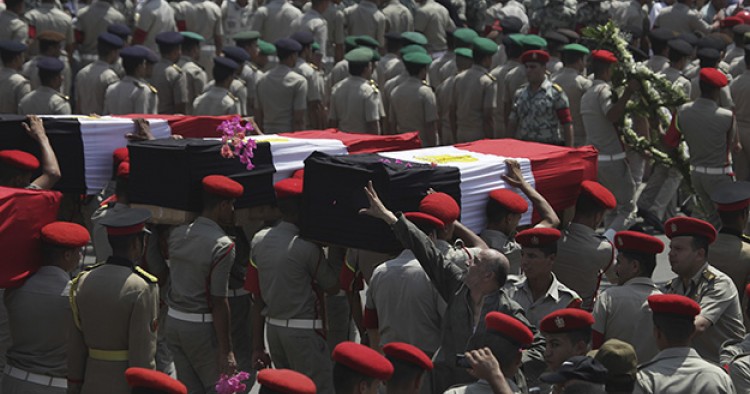 As the war against ISIS rages in Syria and Iraq, Egypt is fighting its own war on terror. On October 24, the Sinai Peninsula witnessed the deadliest attack on Egypt’s military in years. Twenty-eight soldiers were killed and another 30 injured when a car bomb exploded at the Karm al-Qawadis security checkpoint in Sheikh Zuweid in North Sinai. Hours later, three security personnel were killed when militants opened fire at a checkpoint in nearby El Arish.  Following the attack, Egyptian President Abdul-Fattah el-Sisi declared on state television that "foreign hands” were behind the violence,” and government sources have indicated that violence in Egypt—including Sinai—is linked to ISIS.

This wave of terrorism is not foreign to the Sinai Peninsula, which witnessed massive terrorist attacks in 2004 and 2006.  Today, the conditions in Sinai are again very dangerous, with attacks and bombings occurring on a regular basis. Prior to October 24, a number of attacks took place on October 19, when a roadside bomb killed seven military personnel in northern Sinai.

The Islamic State called for some of these attacks, urging Sinai insurgents to press ahead with violence against Egyptian security forces. "Rig the roads with explosives for them. Attack their bases. Raid their homes. Cut off their heads. Do not let them feel secure," Islamic State spokesman Abu Muhammad al-Adnani said in a statement to Egyptian militants online. Following suit, the Sinai-based militant group Ansar Beit al-Maqdis has beheaded seven Egyptians since August.

ISIS is also recruiting in Egypt—and rather successfully. In October, an ISIS recruitment cell comprised of eight members was uncovered in the city of Port Said. In an off-the-record conversation with an Egyptian official, the author was informed that no fewer than 5,000 Egyptians, most of whom are radical Salafis, are now fighting in Syria. Similar to Egyptians fighting with the mujahideen in Afghanistan and returning to Egypt, the regime could face a problem with radicalized Egyptians returning from Syria and Iraq with the intention of carrying out domestic attacks.

The flow of Egyptian fighters to Syria should come as no surprise. Under the previous regime, President Mohamed Morsi encouraged Egyptians to participate in the jihad in Syria against the Assad regime. The flow obviously did not stop once Morsi was ousted. Last month, ISIS claimed that an Egyptian ex-police officer had died in one of its sponsored suicide attacks inside Iraq.  This shows that ISIS’s sphere of influence in Egypt has become wider.  According to a survey conducted by the Fikra Forum project of the Washington Institute for Near East Policy, 3% of Egyptians (some 2.5 million) support ISIS.

Furthermore, Libya and its ongoing battle between Islamists and non-Islamist forces presents a nearby breeding ground for ISIS. In October, Ansar al-Shariah declared an Islamic emirate in Derna, East Libya, pledging its allegiance to ISIS. Videos of militants in Derna brandishing the ISIS flag have also surfaced on the Internet. Libya has been a threat to Egypt since the Qaddafi regime was toppled, particularly due to the country’s porous and unsecured borders with Egypt. These borders now allow for an unencumbered flow of fighters and weapons, which eventually reach the Sinai Peninsula and contribute to the already unstable situation.

Egypt and the Coalition

While Egypt has agreed to join the U.S.-led coalition against ISIS and has attended a number of coalition meetings aimed at coordinating joint military efforts, president Sisi and his government have yet to share details of Egypt’s involvement. Generally, Egypt has emphasized that its main battle with terrorism is within its own borders, and has not yet committed itself to any role outside Egypt. "For the Egyptian military the most important thing is its borders and the stability of its country and the protection of its country," Prime Minister Ibrahim Mehleb told Reuters in an October interview.

A possible explanation for Egypt’s approach toward fighting ISIS is how it views the war on terror. According to Sisi and his cabinet, the war on terror must expand beyond ISIS. During a meeting with U.S. Secretary of State John Kerry, in multiple interviews, and in his UN General Assembly speech, Sisi argued that the war on terror should include all Islamic extremist groups, including the Muslim Brotherhood. Then, in an interview with the Associated Press, he emphasized the need to fight the extremist ideology behind ISIS and not simply the group itself. During a coalition meeting in Jeddah, Egyptian Foreign Minister Sameh Shoukry critiqued the United States’ use of resources, suggesting that it should spend its money not only to quell ISIS but other extremist groups, such as those in Sinai and Libya. Shoukry’s inclusion of the Muslim Brotherhood as part of these other groups is implicit, especially after the Egyptian government had the Brotherhood declared a terrorist group in December 2013.

Yet despite its unwillingness to get involved directly in military operations beyond its borders, Egypt can still contribute logistics, intelligence, and ideological support. Logistically, Egypt can revitalize the military relationship it previously had with the United States by allowing coalition members to use Egyptian air space and by expediting coalition-related traffic through the Suez Canal. From the intelligence perspective, Egypt has a long history of confronting terrorist organizations both domestically and abroad. Egypt has been a reliable ally to the U.S. war on global terrorism in terms of intelligence sharing, investigations and interrogations, and tracking suspects; such activities can ultimately aid the coalition.

Egypt can perhaps be most useful in the ideological fight against ISIS. Recently, Egypt’s grand mufti condemned ISIS’s actions and accused it of deviating from Islam. Kerry has also emphasized Egypt’s role as an ideological opponent to ISIS by calling the country “an intellectual and cultural capital of the Muslim world” that should “publicly [renounce] the ideology of hatred and violence that [ISIS] spread[s].” After all, Egypt is the birthplace of both moderate and extremist Islamic thought, the hub of Sunni scholarship, and home to Al-Azhar University, the center of moderate Islamic teaching. For these reasons, Egypt can play a key role in countering ISIS’s extremist ideology.

Egypt’s approach to ISIS is not unchangeable, and its position on military involvement ultimately hinges on Libya and the Gulf. The precarious situation in neighboring Libya could easily spill over into Egypt, bringing with it more violence and terrorist activity. UN Envoy for Libya Bernardino Leon said that “the self-proclaimed Islamic State organization (Daesh) is already operating in [Libya], which is plagued by violence. Libyans who had fought in Syria and Iraq are now back in their country, and the present chaos is the ideal condition for their establishment." Libya has become a hotbed for extremism – a threat that could persuade Egypt to take a more active stance in the broader war on terror. ISIS’s actions toward the Gulf could push Egypt to pursue military action as well. In an interview with Reuters on October 20, Mehleb affirmed that “the security of the Gulf is the security of Egypt and Egypt's security is the Gulf's security.” If strengthening the Iraqi government while conducting airstrikes fails and if ISIS threatens Egypt’s Gulf partners, then some form of Egyptian military role in or near the Gulf might become a consideration.

Looking Out for Egypt’s Interests

“Destroying and degrading” ISIS, the tagline of Obama’s campaign, will not happen overnight. The general consensus among coalition members is the need for time and patience. There is no quick fix to the ISIS problem, and it will take years to resolve.  While Egypt and the United States have recently disagreed over domestic developments, the coalition against ISIS has been an area of agreement, as suggested by the meeting between Obama and Sisi on September 25, which focused solely on security issues.  Egypt’s joining of the coalition has also allowed for a rebuilding of Egypt’s profile in the region after the past three years of domestic upheaval. Egypt’s war on terror is largely at home, but the government in Cairo is satisfied that other regional and international players have come around to its view of identifying radical Islamism as a major threat.

>>Interactive Feature: A History of Terrorism in Egypt's Sinai