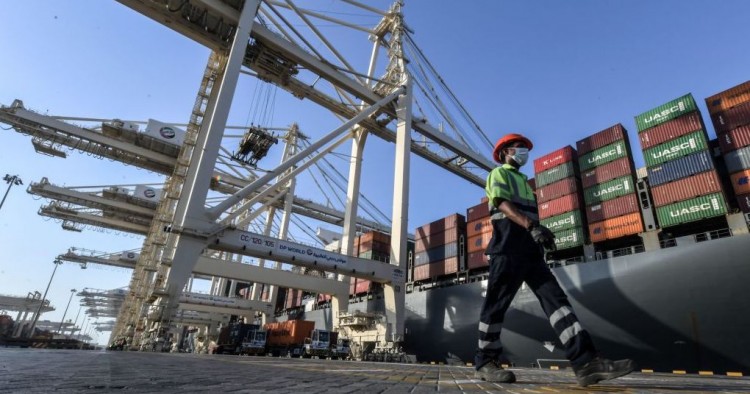 The coronavirus pandemic that originated in China could not have come at a worse moment for the United Arab Emirates (UAE). Indeed, before its outbreak, relations between the UAE and China were in an excellent place. Underpinned by growing economic exchange, the bilateral partnership holds the promise of turning into a geo-economic and geopolitical one. With more than 4,000 Chinese companies operating in the country, the UAE is Beijing's leading economic partner in the Middle East and North Africa (MENA). Since 2015, bilateral trade has achieved annual growth of roughly 10 percent, reaching a total of $35 billion in the first nine months of 2019. While crude oil and natural gas account for most of the UAE’s (as well as most of the region’s) exports to China, bilateral relations have deepened far beyond that since President Xi Jinping’s visit to the UAE in 2018. For Beijing, the UAE is first and foremost a critical hub for re-export to the wider region, as about 60 percent of exports from the Asian country pass through UAE ports. Ultimately, it is in the domain of maritime trade and around China’s Belt and Road Initiative (BRI) that the partnership has its greatest potential.

DP World between China and the UAE

In recent decades, as part of its diversification strategy, the UAE has invested heavily in digital innovation, financial services, transport logistics, and tourism. A cornerstone of this transition is the creation of Dubai Port World (DP World), a global leader in port management and infrastructure development tied to Dubai’s ruling family. While pursuing a consistent commercial strategy, DP World’s external operations have often overlapped with Abu Dhabi's foreign policy, especially since 2009, when the synergy between Abu Dhabi and Dubai was greatly strengthened by the former’s bailout of the latter. By channeling investments into upgrading and managing ports around the world, DP World has emerged as a valuable geo-economic and geopolitical tool for cementing Abu Dhabi’s political ties with the host countries.

Now the Dubai port giant is confronted with the largest infrastructural project ever designed: the Maritime Silk Road, i.e. the BRI’s maritime corridor running from China to Africa and Europe. And both it and the UAE more broadly are keen to take part. In 2018, the Abu Dhabi Global Market (ADGM) signed a memorandum of understanding with the Shanghai Stock Exchange, to establish a Belt and Road Exchange to serve as an international capital-raising platform to support BRI-related projects. Had it not been for the coronavirus pandemic, Dubai would have even hosted the 2020 Belt & Road Initiative summit in April.

Crucially, as its CEO pointed out, DP World already operates numerous ports along the Maritime Silk Road, including four in China itself, and has been putting considerable effort into expanding this network. Thanks to decades-long concessions to DP World, the UAE controls or has privileged access to coastal facilities in southern Yemen, including on the strategically located island of Socotra, Eritrea, Somaliland, Puntland, Sudan, Egypt, Libya, Cyprus, and elsewhere. Further strengthening its posture in the Eastern Mediterranean would allow the UAE to geopolitically link this “string of ports,” running from Dubai’s own Jebel Ali Port to the heart of Europe, thus re-connecting to the other BRI corridors.

This ambitious strategy would transform the UAE into the leader of a regional offshoot of the BRI and further position the country as China’s partner of choice in the MENA region. In addition, to historians and Italian diplomats observing the strategy, the UAE increasingly resembles a modern-day Arab version of the Venetian Republic during the Renaissance: a sea-faring, trading city-state able to project influence and “smart power” well beyond its region. But if those are the objectives, obstacles still abound on the road to success.

One Belt, One Road: One option

Many of the UAE’s efforts to play such a major role in the BRI originally came about in response to its fear of being left out of the project entirely. According to Beijing's initial plans, the BRI's maritime corridor should have stretched far away from the UAE. The key port in the Indian Ocean was (and still is) Pakistan’s Gwadar, located 400 miles from the UAE. Built almost entirely from scratch by Beijing, the port of Gwadar is particularly strategic since it allows China to bypass the contested South China Sea and the U.S.-controlled Strait of Malacca. In the Gulf itself, China had bet on the Omani port of Duqm. Backed by a Sino-Omani investment of $10.7 billion, Duqm port’s free trade zone is expected to become the largest in the Middle East. Like Gwadar and unlike the UAE’s ports, Duqm allows China to avoid another perilous strait — in this case Hormuz — that is affected by U.S.-Iran brinkmanship and tensions between the Saudis and Iranians.One of the BRI's land corridors is set to cross Iran, which signed a 25-year partnership agreement with Beijing, and other Gulf monarchies such as Qatar and Kuwait have also worked hard to attract Chinese investments, so the UAE has fierce competition in the region.

In addition, China itself could perceive the UAE as a competitor and directly threaten its position in the maritime transport industry. This was particularly clear during a bilateral dispute over the strategic port of Djibouti in 2018. In February that year, the government of Djibouti unilaterally revoked a 30-year concession awarded to DP World for the Doraleh Container Terminal. Soon thereafter Doraleh was offered to China Merchants Holding Group, a heavyweight in logistics and port management. As a result, DP World is now suing the Chinese group, with little chances of success. The Djiboutian dispute demonstrated that while the UAE is keen to draw red lines on becoming a subservient partner to Beijing, competition is just not an option.

Another obstacle for Emirati diplomacy is that the country lacks a fully consistent strategy. While DP World seems to be best positioned to partner with China, the UAE has also deployed Abu Dhabi Ports, the other Emirati port operator, which is tied to Abu Dhabi's ruling family. This state-owned company was born around Khalifa Port, a multibillion-dollar facility serving the city of Abu Dhabi and located just 25 miles away from Jebel Ali in Dubai. In 2019, Abu Dhabi Ports almost doubled container volume handled at Khalifa Port after it signed an agreement with MSC and a concession with COSCO Shipping Ports, the Chinese port management leader. This internal competition over a stake in the BRI between the two semi-public companies is not a new dynamic for the small federal state, which boasts seven different ruling families, but it could undermine the effectiveness of the country as a whole, especially as coping with the COVID-19 pandemic has depleted financial resources and stiffened competition.

Finally, one noteworthy obstacle for the UAE going forward is how to guarantee the security of these coastal assets, often located in unstable or even conflict-ridden countries. If that is already a significant challenge for China, which is working to develop its own network of private maritime security companies, it is an even bigger issue for a small country like the UAE. While the Emirati military has proven its effectiveness in combat, it has generally focused on niche or special operations to circumvent its lack of human capital, and often relied on foreign (especially Western or Latin American) contractors to complement its own forces. Yet, relying on foreign contractors to guard strategic coastal assets would expose the UAE to significant risk, much like trusting local forces to provide security in unstable conditions would.

The Maritime Silk Road has sparked a race for Chinese investments in the Gulf and so far the UAE’s strong position in maritime logistics has enabled the country to take the lead. However, the race is not yet over. As the U.S.-China rivalry continues to heat up, the UAE-China partnership will likely be put to the test politically. On the one hand, even at a time of U.S. retrenchment, Beijing seems unwilling to get enmeshed in MENA politics and conflicts. Indeed, it has favored engagement with the Gulf monarchies precisely because, unlike many other regional states, they guarantee a degree of political stability. But, on the other, this hands-off Chinese approach does not really provide the Gulf countries with an alternative to the U.S. Thus, the Gulf monarchies won’t risk alienating Washington to preserve their Chinese strategies. In the end, it seems that once again in the Gulf, geopolitics will be king.