The end is not near: Sleepwalking through human and military security crises in MENA 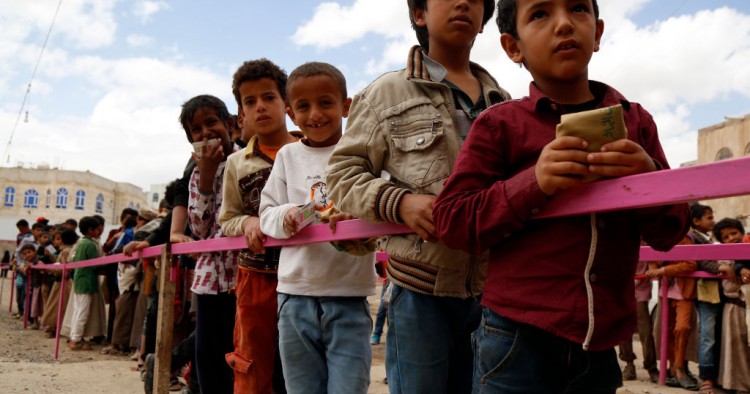 The and North Africa (MENA) is shouldering the world’s largest humanitarian caseload and most severe crises of undernourishment since World War II. Tens of millions of people in five MENA countries are struggling with chronic hunger, and millions of them are on the brink of famine. MENA has also been grappling with the world’s longest chain of consecutive regional wars every decade since the mid-20th century, now spanning nearly 75 years. These human and military security crises are dangerous because, due to their concurrence and prolongation, they could become locked into a mutually reinforcing cycle.

Food security is an important barometer for the existence of conditions that permit countries to develop and maintain inclusive socioeconomic environments that can ensure sociopolitical stability. A state of food security entails that enough nutritious food is available and accessible at all times for all people. No society has managed to fulfill this objective, but most nations strive to achieve and maintain it at least for most of their people, most of the time. Successfully doing this depends in part on the economic systems and public policies in place. These include policies used to manage the natural resource base necessary to produce food, mainly freshwater and agricultural land, and to make this food accessible through the prevailing distribution of income, infrastructure, and public services. The stability of food supplies and markets is central to preventing hunger.

Stability is a rare commodity in the MENA region. Its countries’ economic systems have historically oscillated between socialist and free market orientations, neither of which has taken adequate care of the natural resource base needed to achieve food security. Taken together, policies have also often been inconsistent and even incoherent. The principle of sustainability in natural resource use and management began to prominently guide policy design toward the end of the 20th century, with the Rio Declaration in 1992. In most MENA countries, however, sustainability is still not well-integrated into policy as a critical priority. This is unfortunate because the sustainability of natural resources, particularly freshwater and agricultural land, is a necessary precursor to human security, economic and sociopolitical stability, and peace.

Sustainable natural resource management involves adopting a long-term outlook. It is possible when there is a certain degree of predictability in contextual conditions that bear upon policy, including macroeconomic stability, over an extended time horizon. Without such stability, formulating sound long-term policies is extremely difficult. In the MENA region, the muddled policy environment, with its shifting priorities and contradictory orientations, has persisted against the backdrop of a debilitating and protracted state of geopolitical instability that has extended since World War II. This instability has become also acute since 2011. Warfare’s physical, humanitarian, social, economic, and developmental repercussions are far reaching. Their marks remain indelible well after the dust from conflicts has settled. The continued escalation, protraction, and expansion of warfare in MENA has created unacceptable risks for the natural resource base ­on which the region’s long-term food security, economic development, and sociopolitical stability depend.

In MENA’s hot-conflict areas, particularly in , military upheavals have destroyed and degraded natural resources and compromised food production. These regional conflicts have also severely undermined people’s financial ability to purchase food. In some areas within the hot-conflict zones, where monetized markets still exist to some degree, inflation has run rampant. In others markets and distribution systems have been destroyed entirely.

Since 2011 there has been a tragic reversal of the human security gains achieved in MENA in the preceding two decades, during which time the proportion of the population living in a state of chronic hunger decreased. MENA is now the only geopolitical region in the world where the proportion of the population that is food insecure is larger than what it was in 1990. The number of undernourished people increased two-fold between 1990 and 2015, from 16.5 million to 33 million, and by May 2019 had reached 52 million. This increase in hunger has been almost exclusively due to the ravages of war and acute military conflicts in five countries: , , , , and . The Mashreq sub-region, MENA’s most populous one, is home to more than 44 million undernourished people, who constitute 85% of MENA’s food insecure population. , , , and have hunger rates that are among the highest in the world. Syria’s humanitarian crisis is the worst since World War II. Yemen has been pushed to the brink of famine unseen for 100 years, according to the UN, and its humanitarian emergency is expected to continue through early 2020.

The protraction of human and military security crises is also fueling another dangerous threat to these countries’ future prosperity and stability. While military conflicts rage on and the devastating humanitarian crises of the present magnitude persist in these countries, there is little room for well-informed and effective policy-making that could attend adequately to the longer-term priorities of sustainable development. One of the most important of these priorities is protecting the natural resource base that is crucial for food security now and in the future. While war grinds on, this resource base is not and cannot be properly managed, and remains exposed to degradation, unlawful exploitation, and destruction. But a country’s sustainable development is conditional upon the resilience of this resource base. Exposing it to conditions in which it is chronically compromised elevates the risks of future socioeconomic stress and instability in that country.

MENA is extremely vulnerable to this potential destructive dynamic. The region’s natural resource environment was already fragile before 2011. Freshwater and fertile agricultural land resources are rapidly becoming more scarce, insecure, and vulnerable due to population growth, improper management, and climate challenges. In precisely the region where no constructive effort should be spared to protect these vital natural resources, warfare is doing just the opposite, making these problems harder to address. Instead of allowing countries to attend to their deepening resource challenges, warring parties are compounding the very structural difficulties and harms that MENA societies are increasingly facing within their natural environments.

The health and sustainability of the region’s essential natural resources must receive immediate attention. At some point, neglecting this urgent priority any further will result in crippling conditions in the affected countries, making it extremely difficult for them to emerge intact, viable, and stable over the long-term. This tipping point may have already been reached in some countries.

Regional warfare must end now. What the international community must come to terms with is that addressing the immediate crises of hunger and near-famine in MENA will not be nearly enough to extinguish the catalysts of instability that protracted warfare has bolstered and that could later reignite renewed cycles of military and human insecurity. This is particularly the case in countries engulfed in warfare for many years or decades, and whose economies have consequently become extremely fragile.  A full appreciation within the international community of the dire consequences of continuing warfare in MENA would humble the arrogance of all the parties myopically invested in military conflicts there.

Amal A. Kandeel is the director of MEI's Climate Change, Environment, and Human Security Program. The views expressed in this article are her own.