Erbil, Baghdad, and Implications of the Oil Dispute 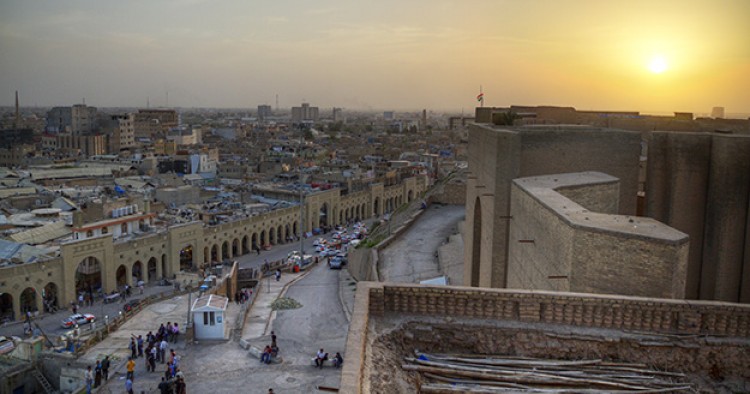 Erbil—the capital of Iraqi Kurdistan—was once a chaotic and dusty backwater. Today, it is well on its way to becoming an attractive and orderly commercial and government center. A decade ago there were virtually no trees, as they had all been cut down for firewood to heat Kurdish hearths during the 1990s wars among Kurds and between Kurds and Saddam Hussein’s army. A magnificent wooded park now graces the mile or so from the high-rise hotel district to the Kurdistan Regional Government’s parliament and offices. The ancient citadel—the current signs claim it was settled as early as 6000 BC—is being tastefully restored with UNESCO help. The once shambolic souk still needs work, but it is a lot more organized than a decade ago. Wide avenues outside the center are sprouting shopping centers, restaurants, offices, hotels, and apartment buildings.

The security presence is high near government offices, but mercifully light elsewhere. Al-Qa‘ida attacks still occur, though rarely. The peshmerga forces associated with what were once the two main political parties, which fought against each other in the 1990s until the United States mediated a peace pact, have been partially merged. More than a dozen public and private universities have been established in the last decade. Health conditions have improved.

All of this is the result of a deliberate, sustained effort by the Kurds of Iraq to use their share of Iraq’s oil revenue to build a Kurdish state, one that is constitutionally part of a sovereign Iraq but with broad self-governance in many areas.

At the moment, a caretaker government is in place, because the now three biggest political parties—one party split and has found itself in third place behind its rebel portion—have been unable to agree on how to slice the patronage pie. Parliament functions as in most other countries, though Kurdish sources tell me the media is far from independent and corruption is a big problem.[1] Kurdish politics can be a rough sport, though nowhere near as deadly as politics in the rest of Iraq.

The vital revenue to support this burgeoning state comes mainly from oil. The Kurdistan Regional Government receives 17 percent of Iraq’s overall oil income, minus deductions for Baghdad expenses that are supposed to benefit Kurdistan. The real amount comes to more or less 14 percent, but that approaches the large sum of $15 billion.

The trouble from the Kurdish point of view is that Baghdad controls the flow of the money, and an increasingly authoritarian Prime Minister Nuri al-Maliki controls Baghdad. A recent dispute over Kurdistan’s oil production prompted Baghdad to reduce and eventually to end the revenue stream, leaving Erbil without the funds needed to pay its employees. The dispute concerns Kurdistan’s production and export of oil without Baghdad’s permission. One and a half million barrels of Kurdistan crude is currently sitting in storage tanks in Turkey, exported via a pipeline that Baghdad does not control.

This may seem like a tempest in a teapot. But it has broader implications than Kurdistan. Iraq has vast oil and gas reserves. It currently produces over three million barrels per day but has potential for much more. Kurdistan produces about one-tenth that amount, but also has potential to produce much more. Once Kurdistan production passes 500,000 barrels per day, Erbil would be better off receiving 100 percent of its own oil revenue rather than 14 percent of Iraq’s, if Iraq’s production does not increase.

The amounts are important, but so too are the directions in which the oil is exported. As things stand today, Iraq sends about 90 percent of its oil through the Gulf and the Strait of Hormuz, under the threat of Iranian guns. If more Iraqi oil were exported to the west (via Jordan to Aqaba) and to the north (through Turkey), Iraq would be tied much more definitively to Europe and the West. Its gas, still largely undeveloped, could eventually be a serious alternative to Russia’s, also reinforcing ties with the West.

Thus it is the geopolitics and geoeconomics of Kurdistan’s oil and gas that make it important. This is why an American diplomat, Brett McGurk, has been shuttling between Baghdad and Erbil, trying to resolve their current dispute. It is also why Turkey and Kurdistan have gone to great lengths to settle their differences. Today, Turkey is a major investor and trading partner for Kurdistan.

As goes oil, so goes Iraq. If Baghdad and Erbil can settle their current differences and reach the long-anticipated agreement on a law regulating production and export of oil and gas as well as distribution of the revenue, Iraq will stay in one piece. But if Kurdistan decides it would be better off to go it alone, calling the referendum President Massoud Barzani never fails to mention to visitors who call at his Saddam Hussein-era palace outside Erbil, Iraq will come apart, and not likely in two neat pieces.

Erbil and Baghdad have never settled their disputes over which territory should be governed by one and the other, including oil-rich Kirkuk. Nor are the Sunnis of western Iraq likely to stick around in an Iraq that without Kurdistan might be 80 percent Shi‘a. Their provinces are already in rebellion against Maliki. A messy dissolution of Iraq, with uncertain borders and ready availability of Sunni extremists from Syria, would be a formula for violence, further realignment of Baghdad and its vast oil reserves with Tehran, and a haven for terrorists in Iraq’s western provinces.

[1] Kamal Chomani, “Freedom of the Press at a Crossroads in Iraqi Kurdistan,” Jadaliyya, 10 January 2014, http://www.jadaliyya.com/pages/index/15974/freedom-of-the-press-at-a-crossroads-in-iraqi-kurd.

Jannah or Jahannam: Options for Dealing with ISIS Detainees