Erdogan Changes His Tune on Assad 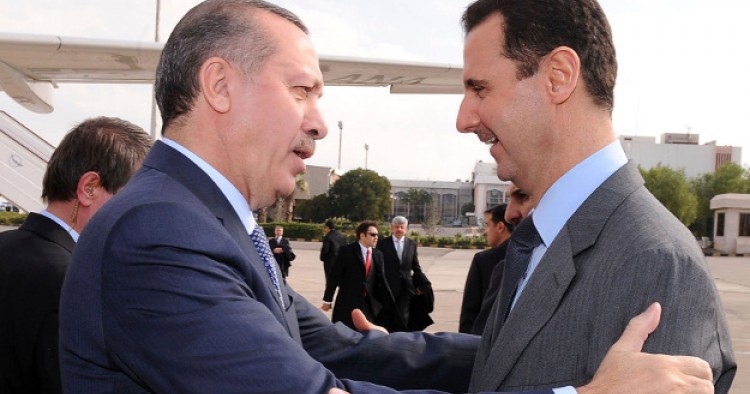 Turkish Prime Minister Ahmet Davutoglu is at the United Nations in New York, making another push for Turkey’s long-standing demand for a safe zone in northern Syria, while President Recep Tayyip Erdogan seems to have realized that it might be a long shot given recent developments.

In a major shift from his previous stance, Erdogan on Thursday suggested that the Syrian president could have a role to play in a future political transition.[1] After years of adamantly opposing the idea, Erdogan seems to have come to terms with the reality on the ground: Assad is not leaving anytime soon, and Turkey must recalibrate the policy it has been pursuing since 2011 or risk being irrelevant. Erdogan’s shift comes against the backdrop of important domestic and regional developments.

Domestically, Erdogan faces an uphill battle ahead of the November snap elections. He has been trying to reverse his party’s electoral fortunes since the AKP lost its parliamentary majority in the June elections, but political uncertainty, rekindled conflict with the PKK, declining investments, and a slowing economy might prove it difficult this time.

Facing a tougher domestic audience, Erdogan has been trying to strike a conciliatory tone on issues that cost his party votes in June. The government’s Syria policy is one of them. The majority of the Turkish public is against what it sees as Erdogan’s uncompromising stance and the AKP’s over involvement in the conflict. In June, the AKP’s votes significantly dropped in border towns that host large Syrian refugee communities, such as Urfa, Hatay, and Mardin.[2]

Regionally, Russia is reportedly building a joint air-ground expeditionary force in Latakia and Tartus. The arrival of SA-22s and combat aircraft could signal Russia’s intent to supplement the regime’s declining air force with strike operations against the rebels and air defense in the regime heartland.

Russian direct military involvement complicates Turkey’s calculations. Turkey has invested heavily in the Syrian opposition, including radical factions, to topple the regime. Turkey-backed groups have recently been gaining ground in the north against regime forces. Russian military buildup might reverse the decline of these forces, further weaken the Syrian opposition, and bolster Assad’s staying power, dealing a blow to Turkey’s efforts of four years.

In an effort to prevent the Syrian Kurds from linking up Kurdish enclaves in northern Syria and creating a safe haven for Syrian refugees who have placed great social, economic, and political burdens on Turkey, Ankara has been pushing for a safe zone inside Syria. The United States has shown little interest in Ankara’s proposal, even after Turkey allowed it to use Incirlik Air Base in the fight against the Islamic State. The presence of Russian combat forces will make the idea even less attractive to the West given the risk of inadvertent clashes with the forces.

Slim prospects for the safe zone render Turkey vulnerable at a time when Kurds at home and in Syria are more assertive than ever. A two-year ceasefire without any meaningful reforms addressing Kurdish demands and the government’s heavy-handed military response to the PKK have heightened Kurdish ethnic sentiments among a new generation of radical Kurds who will not settle for anything short of autonomy.

The Syrian Kurds are equally decisive. The military, diplomatic, and political boost that the PYD, the PKK’s Syrian offshoot, has received from the West due to its fight against the Islamic State played an important role in linking up two of the three Kurdish cantons in northern Syria. Turks want to ensure that the PYD does not advance west of the Euphrates, as that would pave the way for a Kurdish corridor along Turkey’s southern border. But plans to capture the last border crossing between Syria and Turkey, Jarablus, which is held by the Islamic State, seem to be underway. Syrian Kurdish leaders recently announced that they are planning to liberate Jarablus in coordination with the United States.[3] Kurdish assertiveness at home and in Syria and the prospect of Kurdish autonomy ruffle Ankara’s feathers.

Adding to Turkey’s frustration is the newly emerging international consensus that Assad could be part of a political transition and remain in his post for some time. The United States and European countries seem to be abandoning their long-standing position in favor of a “controlled transition” that would prevent regime collapse and an even greater chaos of which the Islamic State could take advantage.

Turkey’s Syria policy has long been out of sync with its Western allies. The AKP, confident of its uncontested power in Turkish politics, previously did not mind the unfavorable public opinion. But with increasing domestic opposition to his Syria policy and international developments turning in Assad’s favor, Erdogan seems to be convinced that it is time to change his tune on Assad. Whether this will amount to a recalibration of Turkey’s Syria policy remains to be seen.