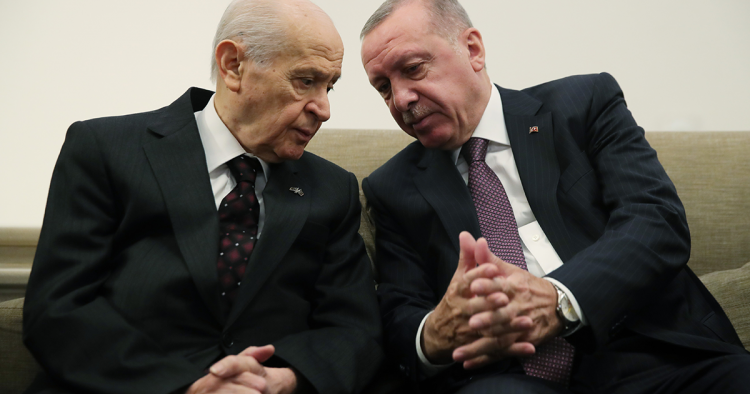 For those following Turkey, there is no doubt about who calls the shots. From the economy and landscape to the arts and sports, everything reflects the will and vision of one man: President Recep Tayyip Erdogan. Since he switched the country over to a presidential system in 2017, he has acquired even more power. To his supporters and many of his detractors, he is invincible and answers to no one but God. In reality, however, Erdogan has become increasingly reliant on Devlet Bahceli, the head of the hard-right Nationalist Action Party (MHP), who is playing a growing role in shaping his policies. And as Erdogan loses ground in the polls, Bahceli's sway only increases.

Erdogan formed an alliance with Bahceli following the June 2015 general elections, in which the ruling Justice and Development Party (AKP) lost its parliamentary majority for the first time in over a decade due to the rise of the pro-Kurdish Peoples’ Democratic Party (HDP). To court nationalist votes, Erdogan resumed the fight against the Kurdistan Workers’ Party (PKK), which to a large extent had stopped after the group’s imprisoned leader, Abdullah Ocalan, called for a cease-fire with the Turkish state in 2013.

Erdogan’s alliance with Bahceli paid off. The AKP recaptured its parliamentary majority in the November 2015 elections. Bahceli’s support was also critical in 2017 when a slim majority of Turkish voters agreed to grant Erdogan sweeping powers in a referendum that transformed the country’s parliamentary system into a presidential one. In 2018, thanks to Bahceli’s support, Erdogan won re-election as president as well.

However, Bahceli’s backing no longer seems to be enough. The ultra-nationalist party is losing ground, polling at just 6.5 percent according to a recent survey, down sharply from the 11 percent it won in the June 2018 parliamentary elections. Bahceli’s help did not prevent the loss of almost all major cities to the opposition in last year’s local elections either.

But Erdogan has few options other than to stick with the nationalists, so he tries hard not to upset Bahceli. Upon Bahceli’s request, for example, he passed a bill in April that allowed the release of a notorious mafia leader, Alaattin Cakici, who has ties to the deep state and the MHP. Cakici had been in jail for 16 years for various crimes including founding a criminal organization and insulting Erdogan. Erdogan had previously resisted similar calls, saying that if an amnesty were declared it would exclude organized crime figures. But after Bahceli called for one after a prison visit to Cakici, Erdogan could not resist.

The April resignation of Interior Minister Suleyman Soylu, who is well-respected among ultranationalists due to his hawkish policies vis-à-vis the Kurds, but is a rival of Erdogan’s son-in-law Berat Albayrak, provided another example of Bahceli’s power over Erdogan. Soylu’s resignation came after a poorly timed announcement of a weekend coronavirus curfew that prompted thousands of people to rush into the streets and head to stores to stock up on goods, heightening the risk of contagion. In remarks to newspapers, Soylu said that the decision to impose the curfew was taken by Erdogan and assumed the blame for its implementation, but not the decision itself — much to Erdogan’s displeasure. But despite pressure from his son-in-law to sack Soylu, Bahceli’s behind-the-scenes pressure worked and Erdogan did not accept his resignation.

More recently, Erdogan heeded calls from Bahceli not to withdraw from a European treaty, commonly known as Istanbul Convention, that aims to prevent violence against women. Turkey signed the accord in 2011, pledging to prevent, prosecute, and eliminate domestic violence and promote equality. However, in the years since domestic violence in Turkey has risen to alarming levels. Last year, 474 women were killed, double the number seen in 2011. But Erdogan’s Islamist allies have been pressuring him to pull out of the accord, arguing that it promotes homosexuality, given its principle of non-discrimination on the grounds of sexual orientation. Bahceli opposed withdrawing, however, and Erdogan, who was initially critical of the agreement and hinted at an immediate withdrawal a few months ago, has now gone silent.

Bahceli got his wish again when Mumtazer Turkone, a former columnist for the now-closed daily paper Zaman, was released from jail in September. Turkone was arrested on Aug. 5, 2016 for allegedly spreading propaganda for the Gulen movement, which Turkish authorities blame for orchestrating the 2016 failed coup. He was sentenced to 10 years and six months in jail on charges of “being a member of a terrorist organization.” Bahceli called for his retrial. There are thousands of innocent people who are sitting in Turkish jails for their alleged link to the Gulenists, including journalists, politicians, human rights activists, and NGO leaders. For Bahceli, however, Turkone is a special case because his brother Mustafa, a member of the MHP’s Grey Wolves movement, was killed by a leftist university student in 1979.

Erdogan recently said that he was open to reintroducing the death penalty and changing the structure of the Constitutional Court following calls from Bahceli. The Constitutional Court became a target for the MHP leader after a row between Soylu and the court’s president over its decision to cancel a provision in the Law on Demonstrations and Public Meetings (Law 2911) banning demonstrations and marches on inter-city highways. Recently, Bahceli said Turkey should restore the death penalty since “there is no other option to fight against crimes and criminals that surpass the threshold of fear.” The death penalty was scrapped in 2004 in line with Erdogan’s then determined push for Turkish EU membership, but bringing it back has been on Bahceli’s agenda for a long time and, once again, he might get his wish.

Cracking down on the Kurds

But to Bahceli, the most pleasing move Erdogan has made recently must be the arrest warrants issued for 82 people, including a mayor, 20 politicians, and activists from the HDP, over pro-Kurdish protests that occurred in 2014, sparked by ISIS’s capture of the mainly Kurdish-Syrian town of Kobane. It was not clear what specific crimes those 82 people have allegedly committed, but the chief prosecutor’s office said the crimes committed during the protests included murder, burning the Turkish flag, and injuring security officials and citizens. This latest move is part of Erdogan’s ongoing campaign against the Kurds and the HDP, the second biggest opposition party in Parliament. Former HDP leaders Selahattin Demirtas and Figen Yuksekdag remain behind bars on bogus terror-related charges despite the European Court of Human Rights calling for their release. Over the past year and a half, 47 out of the 65 HDP mayors elected in the 2019 local elections have been removed and replaced by unelected officials. Ayhan Bilgen, the HDP mayor of the eastern city of Kars who was elected in 2019, was among those arrested last week. He was the pro-Kurdish party’s last big-city mayor still in office and his removal left the HDP in control of just four of the 53 councils it won in 2019.

Erdogan’s repression of the Kurds goes beyond their elected officials. Two Kurdish farmers were recently detained by soldiers while working on their farm and were later pushed out of a helicopter after reportedly being tortured. One of the farmers died and the other was forcibly taken to a military hospital, which issued a report saying he was in no condition to testify about what had happened.

Shoring up the base

Erdogan has always relied on allies to get what he wants. When he first came to power in 2002, his priority was to sideline the secularist elite, particularly the military. He relied on a coalition of conservatives, including the Gulenists, liberals, and even social democrats critical of the outsized role the military had played in Turkish politics for decades. Once that was accomplished, he set his sight on the presidency in 2011, hoping to galvanize the conservatives and the Kurds. When that did not work, he turned to the nationalists in 2015. His priority now is to keep his conservative, nationalist base together at a time when economic and COVID-19-related problems are compounding his domestic challenges — but that is proving an increasingly difficult task. Both he and his ally Bahceli are losing ground in the polls, and Erdogan does not have many options other than to work with the nationalists to shore up his base. Recently, he has been trying to reach out to appeal to the base of another nationalist party, the Good Party (IYI Party), which splintered off from the MHP in late 2017.

The latest round of arrests of HDP politicians and activists is an attempt to further demonize the pro-Kurdish party. The Erdogan and Bahceli duo want to undermine a potential move by the HDP to formally join the opposition coalition, which includes the IYI Party and the Republican People’s Party as well as several other smaller parties, and bring IYI supporters into the fold. But IYI Party’s nationalist base is different from that of the MHP. It is more educated, urban, and secular, and less willing to support demonizing the legitimate Kurdish political movement, which leaves Erdogan even more dependent on Bahceli.

To many, after almost two decades in power, Erdogan has never seemed more in control. In reality, however, he has never been weaker. He started off by establishing one-man rule, but has ended up with two-man rule instead — and the second man, the head of a party polling at just 6.5 percent, seems to be calling all the shots.

Gönül Tol is the director of MEI's Turkey Program and a senior fellow with the Frontier Europe Initiative. The views expressed in this piece are her own.