The EU and the Middle East: In search of a strategy 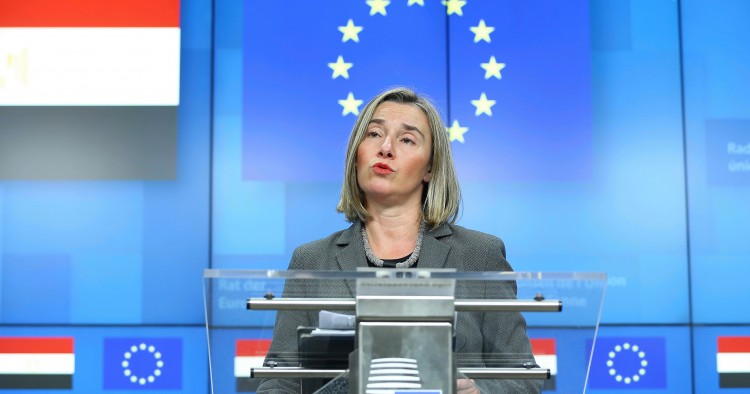 Looking back at 2018, it is safe to say that the EU’s actions in the Middle East were not based on any coherent and effective regional strategy. Since 1993, the EU has not adopted a comprehensive document to form the basis for its diplomatic and economic actions toward the Middle East, one of the world’s most significant regions. While developing a common policy would likely be difficult, given the divergence between Germany, France, and the United Kingdom, it is unlikely to get any easier after Brexit. The main problem, when it comes to the Middle East, is that the EU is simply not proactive.

While the EU’s Global Strategy touches on the Middle East, it is not enough; the EU still lacks a coherent, detailed, and realistic strategy toward the region. The Global Strategy states, “The Mediterranean, Middle East, and parts of sub-Saharan Africa are in turmoil, the outcome of which will likely only become clear decades from now.” This suggests that the EU has already given up, admitting that it does not intend to make a significant difference in the region. In other words, the EU is ready to react, but not to act. The main reason for this is the divergent interests of its key players. The question remains, however, as to whether this attitude is in line with the bloc’s global ambitions.

If Europeans intend to be more than just passive bystanders, it is high time they took the initiative and became more proactive in the region. Reasonable and proactive political and economic actions must be based on a well-structured, thoughtful, and realistic vision. The key questions should be: what are the EU’s interests and what do Europeans want to achieve in the Middle East? Does the EU have more convergent or divergent interests in the region in comparison with other global powers like China and the U.S.?

Although the Middle East plays an important role in the EU’s external policy, bilateral relations still form the basis for most of its diplomatic actions. As a result, individual member states, rather than EU institutions, shape the bloc’s policy toward the region. According to the European External Action Service, EU policy “towards the North African and Middle Eastern countries seeks to encourage political and economic reform in each individual country in due respect for its specific features and regional cooperation among the countries of the region themselves and with the EU.” In this way Europeans try to cope with challenges like migration, the Iran nuclear deal, the ongoing conflicts in Syria and Yemen, the Palestinian question, EU-Turkey accession negotiations, and the crisis in the Gulf Cooperation Council (GCC).

Overall policy toward partners in the region is currently based on cooperation documents or initiatives like the European Neighborhood Policy (ENP), the Union for the Mediterranean (UfM), the EU’s agreement with the GCC (1988), and direct cooperation with the League of Arab States as well as with the Organization of Islamic Cooperation. As a result, European policy on the Middle East is fragmented and often inconsistent. No one document addresses all Middle Eastern countries along the lines of the EU’s strategies toward Central Asia (2007), Central America (2007), the Arctic (2016), Asia (2014), and Africa (2007).

The Iran nuclear deal is but one example. Although Europeans openly criticized President Donald Trump and his decision to reinstate U.S. sanctions, the EU has not done much to oppose the American move and protect major European investors. According to its global strategy, the EU intends to further its collaboration both with GCC member states and Iran. Yet this part of the strategy may soon be irrelevant as the current U.S. administration will not turn a blind eye to European countries’ economic and political cooperation with Iran.

A similar failure of EU diplomacy can be observed in the case of Syria. Europe’s influence on this war-torn country is quite limited. Even the Chinese government has more to say in Syria and greater diplomatic leverage over the Assad regime. Russia has successfully marginalized the EU in Syria and, as a result, Brussels plays no significant role in the country and has almost no political allies there. If U.S. forces do leave Syria in 2019, as President Trump has suggested, then the European position will only weaken further.

Undoubtedly, the bloc could play a much more proactive and significant role in the Middle East. The EU could be more active on the Iran nuclear deal and in the case of Syria, Yemen, and other Middle Eastern conflicts. For now, it seems that a lack of strategic vision is the main problem. With that in mind, EU officials and leaders of key member states should start working on such a document in 2019. Better late than never.