The European Union and Iran 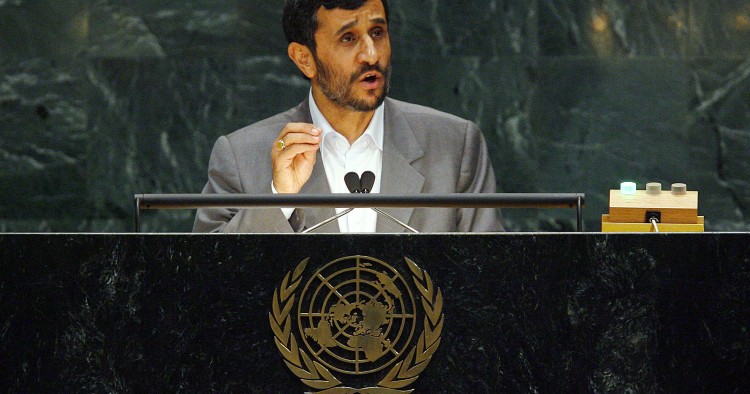 European governments initially reacted to Iran’s Islamic revolution by a careful testing of the ground with the new regime. But relations deteriorated quickly, as Iran accused some European countries of siding with Iraq in the Iran-Iraq War and Iranian agents killed Iranian opposition figures in European capitals.

Not until the 1992 Edinburgh European Council did the European Union (EU) decide to look for new ways to organize their relations with the Islamic Republic. Hence the idea of a “critical dialogue” was born. However, EU-Iranian relations deteriorated again in 1995. Only after the surprise election of the malleable Muhammad Khatami and the commencement of Iran’s reforms did the EU re-engage with the Islamic Republic in a “comprehensive dialogue.”

EU negotiations with Iran continued even after a secret Iranian nuclear facility was disclosed in summer 2002. There were two reasons for this: first, the Europeans were still confident that their engagement with the Islamic Republic would strengthen the reformists and thus further de-radicalize the regime, and second, the international community was already preoccupied with the Iraq crisis.

In summer 2003 the EU’s foreign policy apparatus was still too cumbersome to act quickly and imaginatively. Hence the Foreign Ministers of the EU’s “big three” — Germany, France, and the United Kingdom (E3) — took the initiative, travelling to Tehran in order to convince their Iranian counterpart to cooperate more closely with the IAEA and to sign the Additional Protocol to the Non-Proliferation Treaty.

After an initial understanding with the Iranian side, the E3 involved the EU’s foreign policy czar, Javier Solana, who quickly became the main negotiator with the Iranians, in cooperation with the E3 Foreign Ministers and, it can be conjectured, with some backchannel involvement from the US. By 2004 all EU policies towards Iran were coordinated by the E3 plus Solana (the so-called E3/EU format), with the Council secretariat playing a central role as the clearing house and main policy “driver.”

Iran’s nuclear file came to dominate the Islamic Republic’s relationship with the EU (though this did not mean that other issues such as human rights, economic relations, and security interests were neglected). The now famous Paris Agreement of November 2004 obtained Iran’s voluntary (Tehran insisted on the phrasing “legally non-binding”) suspension of uranium enrichment, which lasted for almost two years and was widely understood as a goodwill gesture and confidence building measure on behalf of the Iranians. By spring 2005 there were legitimate reasons for optimism that a mutually acceptable agreement could be reached. Yet, positions were, in the end, irreconcilable as Iran insisted on the “right” to uranium enrichment, which it saw threatened by seemingly endless negotiations with the EU, whereas the Europeans were concerned about the potential military aspects of Iran’s nuclear program. When the EU finally presented its offer (shortly after the Iranian elections but before the new president was sworn in), the Iranians furiously rejected it.

Tehran criticized the offer as too vague and too demanding, and most importantly saw the EU as being incapable of obtaining a security guarantee from Washington. The outlandish remarks of the newly elected Mahmud Ahmadinejad on the Holocaust shocked the EU deeply, scarred Iran’s image in Europe, and destroyed the fine web of cultural and university relations between the EU and Iran that had been carefully built up during the Khatami years and before.

European decision-makers were careful not to allow their outrage to determine the outcome of the nuclear negotiations. They stuck with their belief that there is no military answer to Iran’s nuclear file. Contrary to the regime’s propaganda, the EU never denied Iran’s right to modern nuclear technology, but objected to its potential military aspects. Hence it was willing to offer the Iranians an acceptable package deal. On the other hand, in the case that there was no movement on the Iranian side they were also ultimately willing to refer Iran’s nuclear file to the Security Council. This was less a gesture towards the US, where the EU’s continued engagement with Iran did not have many supporters, than a logical consequence of the Europeans’ effort to allow the international community to play a significant role with regard to the Iranian file.

In 2006 EU-Iranian negotiations reached an impasse and consequently the Europeans referred Iran’s nuclear dossier to the UNSC. This meant that the same policy — offering the Iranians economic and political cooperation on one hand and going for sanctions when the Iranians stall, was transferred to a higher political level. As a result the EU’s Iran policy became intertwined with the UNSC’s Permanent 5 (China, Russia, USA, France, and the United Kingdom). This new international consensual format (P5+Germany+EU, or E3/3+EU) was from now on the main framework to engage with Iran. Javier Solana was tasked with the continuation of talks with his Iranian counterpart and he delivered the letters written on behalf of the international community to Iran. (This happened in 2006 with the new offer and in June 2008 with the final package.) Ever since, the international community — and with it the EU — has been awaiting Iran’s answer.

Since 2007 the stalemate over Iran’s nuclear file has put all other EU policies with Tehran on hold. Internally, there have been critical voices bemoaning the “nuclear centric” nature of the EU’s Iran policy. It has been suggested that the focus shift to European energy security instead, where the increasing reliance on Russia has become a major concern. This debate continues to this day although there was never (and will never be) a real chance that Iran’s nuclear file would become just one issue among others in the EU’s relations with Iran. The main reason is that the EU has simply invested too much prestige and effort to find a mutually acceptable negotiated solution.

Internal differences notwithstanding, the European position towards sanctions has been clear from the beginning. Brussels never thought of sanctions as a tool for regime change nor as some kind of economic warfare. Rather, the EU insisted that sanctions must focus on enterprises and individuals involved in the Iranian nuclear program and should aim to bring Iran back to the negotiation table. In fact, targeted sanctions have imposed a cost, and Tehran hides its nervousness behind the smokescreen of stark polemics.

Although Iran continues to muddle through, mere survival was not the aim of the regime. Rather Tehran wanted to achieve international acceptance and legitimacy for its presumably peaceful nuclear program. This also poses a domestic problem for Tehran because the regime has preferred to frame any critique of the conduct of its nuclear file as “Western aggression” against the progress of the Iranian nation. Therefore, acting in a consensual manner with Russia and China counters the regime’s basic argument. If for nothing else, the EU must be credited for having been able to keep the enlarged P5+1 together and functioning, thus making it clear to the Iranian public that the regime is acting in defiance of the international community, and not of the “imperialist” West. But most of all, it put the ball firmly in Iran’s camp; after all, there is an offer on the table and Tehran is free to reengage any time.

The P5+1 format will remain intact should direct US-Iranian talks indeed materialize, if only as some kind of a safety net should the talks fail. As a consequence for better or worse, EU-Iranian relations remain dependent on the development of Iran’s nuclear file, and thus are likely to deteriorate.