The Failure of ISIS’s Ramadan Offensive 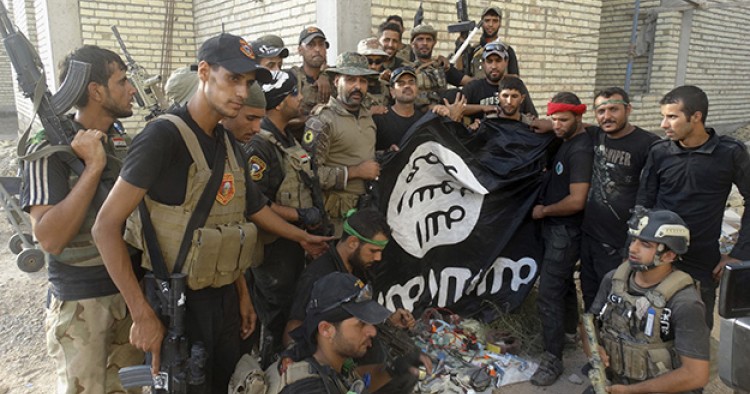 If the hallmark of al-Qa‘ida was to execute simultaneous spectacular attacks to advance its strategic momentum, the month of Ramadan in June and July showed that the Islamic State (ISIS) is taking this tactic to a new level. Yet the extreme amounts of blood shed during the holy month will likely ultimately weaken ISIS, as tribes and other groups in Syria and Iraq, even more appalled by the organization’s barbarism, unite against it.

On June 23 ISIS’s spokesman, Sheikh Abu Muhammad al-Adnani al-Shami, issued an audio recording in which he revealed that the organization would not observe the traditional obligations of prayer and fasting during Ramadan, but would continue to commit violence. He said, “Oh, Allah make this month a month of victories for the Muslims everywhere and make it a month of disasters, defeats, and disgrace for the kuffar everywhere.”

To make the point, a wave of ISIS attacks struck over a single weekend in late June. A Saudi suicide bomber flew to Kuwait City, acquired a bomb belt, and blew himself up in a Shi‘i mosque during Friday prayers, killing 25. In Tunisia an ISIS gunman trained in Libya killed 38 mainly British tourists on the beach at Sousse. ISIS fighters infiltrated the town of Kobani, Syria disguised as Kurdish security forces and shot any Kurd they saw; 145 civilians lay dead at the end of the siege. In Lyon, France, a man beheaded his superior, placed the head and an ISIS flag on the fence of an American gas company, and attempted to blow up the facility.

The month continued with almost 100 worshipers shot to death in a mosque in Nigeria by Boko Haram gunmen and dozens of men strung up crucifix-style in Raqqa, Syria for drinking water or eating while traveling during the day, acceptable practices in Islam.

There have been few, if any, past terror groups that have deliberately massacred innocent people on Islamic holy days. ISIS has twisted the meaning of devotion to Islam’s traditions to suit its strategy. ISIS’s view is that Ramadan is a holy month whose significance comes from the group’s continued killing of enemies—whether believers or unbelievers.

The alarming Ramadan violence dovetails with ISIS’s stance that the Muslim world must be shocked out of its lethargy and that traditional, peaceful Islamic practices must be rejected. Yet even within this frame, ISIS’s ideology had become more radical in the lead-up to Ramadan. Since January, the group’s core message of fighting to establish the caliphate and safeguarding the purity of the “Islamic State” has moved toward acting as a vengeful instrument of God.

Signs of this shift can be found in ISIS’s magazine, Dabiq. The February 2015 issue mocked the interpretation of Islam as based on living in harmony and peace with others. It stated that ISIS’s interpretation of the Qur’an is that Islam was always and will always be the religion of the sword, conquest, and death.

Until ISIS, virtually all takfiri jihadis portrayed themselves as the pinnacle of Islamic orthodoxy and devotion to God, designating themselves as the ultimate protectors of Islam. And up until recently, ISIS also stressed via social media and other outlets that it is comprised of a community of religious loyalists that would strive to impress Muslims through its righteous actions and orthodoxy. That image is now gone. By choosing Ramadan as a period in which to campaign against its enemies, ISIS and its global affiliates have gone from role-modeling devotion to a rejection of all respectful aspects of the faith.

Does ISIS leader Abu Bakr al-Baghdadi believe that such an in-your-face “damn your traditions or die” strategy will realistically impress 1.6 billion Muslims to support or at least not resist ISIS’s advances? Can he convince the faithful that he and his men are so deeply pious that they have a special dispensation to not only ignore Islamic tradition but to work toward its destruction?

ISIS seems to believe that the world’s Muslims can only be impressed by its massacres and that it does enjoy a holy exemption that allows it to kill so many. Yet bloody missions are hard to ignore, and this “anti-Ramadan” campaign is a miscalculation that could eventually damage the group’s global propaganda effort. More importantly, it could be the starting point of a shift that could bring ISIS new enemies and force it back into the shadows.

ISIS: On the Defensive despite Appearances

For all its bluster and allegiances, ISIS is showing signs of weakness. It is on the defensive throughout the entire Middle East and Africa, and that spells doom for a group designed to exist only on the attack. While it is not losing large areas of terrain, ISIS is certainly not winning in the way its videos portray.

In recent months ISIS has only maintained its victorious initiative through offensive shock and surprise attacks that rely on the withdrawal of its enemies from contested areas like Ramadi and Palmyra. Its ability to muster large numbers of highly motivated attackers who lead multiple and simultaneous suicide bombings and follow them up with shocking displays of inhumanity has created the process by which it has won seemingly easy victories.

However, the entire spectrum of ISIS’s offensive capacity is now on a decline, and everywhere it calculated carving out terrain and victory this Ramadan failed or was under direct attack. In Egypt its Sinai Province attempted to seize 12 major army checkpoints that would have given it the military capacity to cut off Rafah and Gaza from Egypt. The attack failed, with over 200 fighters killed. That represents most, if not all, of its covert commanders and foot soldiers in the Sinai. In addition, Egypt has mobilized to hunt ISIS down using the full capacity of its armed forces. In Libya, the group’s seizure of Sirte and Derna was met with a violent backlash from militias that were fighting each other. Derna was cleansed of ISIS forces within a week, and Sirte is surrounded by opposition armies. Tunisia and Algeria are mobilizing with France and Britain to take ISIS on directly in North Africa. Even the slow-to-respond Turkey has struck ISIS positions in northern Syria as well as mobilized 55,000 troops in an operation designed to cut off ISIS’s border controls.

In Syria the Kurdish militia, the YPG, seized the strategic village of Tel Abyad from ISIS. This cut the main ISIS supply line between Raqqa and Turkey. Although the Kurds do not have a plan to take Raqqa, cutting it off from resupply and foreign fighters means that ISIS will have to relocate forces from Iraq or from Palmyra. This will lead to further losses. Baghdadi seemed to be aware that his foreign fighters were less welcome in Syria than his home country of Iraq. In recent speeches he hinted that Raqqa would be in other groups’ crosshairs before Mosul would be liberated by Iraqis.

Reports of mayhem in Raqqa abound. Earlier this year ISIS executed as many as 60 defecting fighters, murdered its own appointed governor, and imposed domination of the Syrian locals via foreign fighters. To the west, the Free Syrian Army has made significant advances and even convinced a battalion of Syrian Army regulars to defect to its side. Over 7,500 American airstrikes are materially damaging ISIS and cutting off lines of communication.

Despite a glacial ground campaign made up of disparate groups, it is hard not to argue that the strategic balance has quietly started tipping against ISIS. And because ISIS has broadly failed to convince the Muslim world to abandon its beliefs and join the caliphate, stoking fear of the organization amid chaos is now the only tool it has. ISIS seeks to shake Muslim resolve to resist by killing even more of a community it desperately needs to fill its ranks.

In turn, ISIS has managed to achieve what the American coalition has not, that is, consolidating the combined hatred of all the opposing regional and tribal groups in a way that may exceed their hatred for the regimes in Syria and Iraq. ISIS has brainwashed themselves into believing that God loves the mass murder of its enemies and the suicide deaths of its fighters more than other acts.

Yet those opposed to such tactics and ideology are becoming united through a common resistance. Signs are strong that sectarian and political differences are being set aside to defeat ISIS first and foremost. Even the Turkish Air Force attacks on the Syrian Kurdish YPG and elements of the PKK do not seem to dissuade the Kurds’ determination to obliterate ISIS in Hasakah and drive fatal wedges into the caliphate’s logistics arteries. Sunnis in Anbar are being armed by Baghdad and now fight near the Shi‘i al-Hashd al-Sha‘bi militias and the Iraqi security forces in Ramadi, Fallujah, and Haditha. Despite groups’ misgivings about the ultimate goals of their fellow fighters, ISIS’s desecration of Ramadan revealed the depth of hatred and violence that must be confronted.