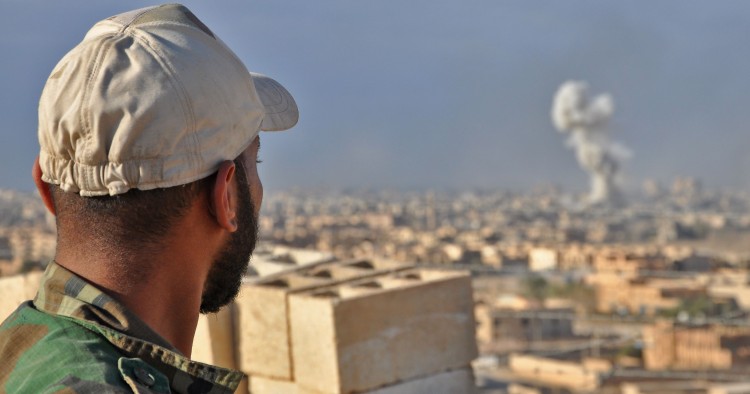 On Aug. 7th, 2018, clashes broke out between fighters with the Iranian-backed Iraqi Popular Mobilization Units (Hashd al-Sha’abi) and those from the Syrian loyalist militia National Defense Forces (NDF) near Abu Kamal, in the province of Deir ez-Zor. The clash was the second of its kind in a week, and fighting between the Syrian and Iranian-backed militias continued throughout August, flaring up again in October. The clashes between ostensible allies allegedly centered on control over several towns and Euphrates River crossings from which the groups collect informal taxes on goods passing through. 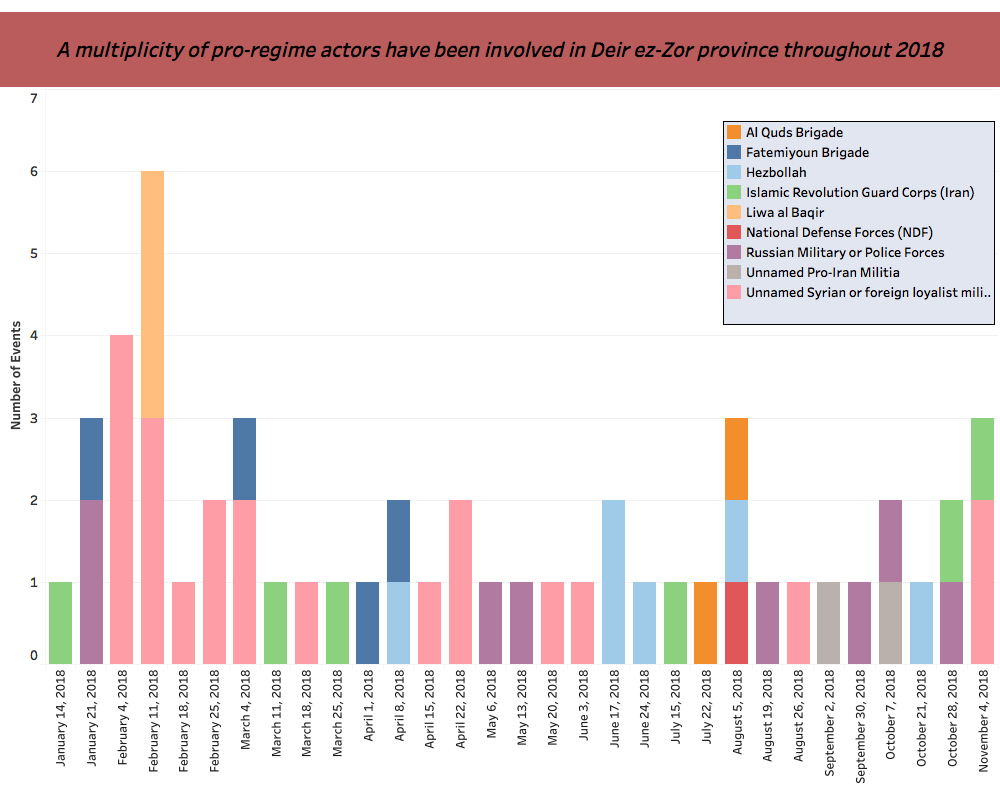 More than a fight over control of taxes and smuggling routes, the conflict is taking on a demographic and strategic dimension as Iran offers generous enticements like salaries more than double those with the Syrian Arab Army to join the Revolutionary Guards or local proxies, such as the Jerusalem Brigades. As fighting winds down, the different responses by the Assad regime, its local proxies, and Russia offer a window into how the fight over the spoils of war shapes and is shaped by competition between the Assad regime and its local and foreign allies.

The spoils of war

The province of Deir ez-Zor has long been valued for its oil and gas reserves. Hydrocarbons resources are a priority for the Assad regime, which needs them both to generate hard currency and support domestic consumption. However, in the latest phase of the Syrian civil war, the province has taken on a renewed strategic importance. For Iran, its greatest asset is that it borders Iraq, where the Islamic Republic has significant influence, and links to Aleppo Province; together these serve as key portions of a land corridor to central Syria and beyond that, Lebanon. The creation of a strip of friendly territory that stretches from its border to Lebanon would allow Iran to supply Hezbollah more readily than it can currently and, in turn, increase its military leverage against its arch-foe, Israel.

For loyalist militias, foreign and domestic, the location of the province along the Euphrates River makes it a chokepoint for the extraction of informal taxes and bribes on goods and people moving through the area. For example, militias in control of the town of Abu Kamal have charged residents who fled ISIS between 25,000 and 50,000 Syrian pounds (~$50-100) to return to their homes. NDF fighters have also begun extorting residents of Abu Kamal for 1-2 million Syrian pounds (~$1,000-2,000) to not be referred to government security services as ISIS collaborators. So while the current fighting is partly a competition over rents, control of the province has taken on greater dimensions for domestic and foreign allies.

So far, the Assad regime has responded tepidly to these skirmishes, arresting several NDF fighters in area. However, this move did not prevent further clashes from breaking out. Significantly, there is no evidence that the regime sent in any of its own forces to quell the fighting. Nor has it sought to curb the extractive practices of the NDF and other local militias. On the surface, it would seem that the regime is either unable – such that it does not have the capacity to meaningfully engage here – or uninterested in reining in these militias.

For its part, Hezbollah – a longtime ally of Assad – rushed units out to the province on August 22nd, ostensibly to support government forces battling the remaining ISIS militants in the area. Hezbollah’s rapid deployment served to tip the balance of allied fighters in the region in Iran’s favor. Indeed, Hezbollah units promptly clashed with the Russian-backed NDF fighters only days after arriving.

Russia also entered the fray on Aug. 14th and sent its military police to act as a buffer force at a series of Euphrates River crossings manned by the NDF and various Iranian-backed militias. Russia again deployed military police to the city of Mayadin in early October to replace withdrawing Iranian militias. The deployment is notable as it was a Russian force that intervened to stop the fighting, rather than the Syrian army or other state security forces.

Iran has sunk deep roots in the area, opening up recruitment centers in the province while continuing to support its own militias. In contrast to Russia’s calls for militias to be integrated with the Syrian army or demobilized, Iran has flatly rejected this idea and wishes to see paramilitary forces in Syria given a prominent and permanent role – similar to the Islamic Revolutionary Guard Corps in Iran and Hashd al-Sha’abi in Iraq. These differing goals put the two countries at odds, and as rebel and Islamist foes are steadily defeated, more clashes are likely as Iran and Russia jostle for influence in Deir ez-Zor.

The fact that Iranian-backed militias felt confident enough to attack NDF positions, necessitating Russian intervention, demonstrates the Assad regime’s unwillingness to employ its own coercive power against wayward allies. However, this does not mean that the regime itself is weak, nor that it does not see opportunity in these clashes. One of the enduring strengths of the Assad regime in the Syrian civil war has been its ability to create and weaponize parastate actors to serve its wartime goals. Acting more like a feudal empire than a modern state, the Assad regime has shown that it is quite comfortable with measuring out autonomy to these loyalist militias during wartime while also understanding the need to provide compensation to these groups beyond equipment and salaries. Squabbles between militias over checkpoints, while not ideal, are not necessarily of manifest concern to the regime so long as they remain contained.

Tensions in Deir ez-Zor will certainly persist in the near to medium term, although the danger to the regime is less acute than the clashes would suggest. Ruthless and cunning, the Assad regime may be allowing or even encouraging Iran to exert increased influence in Deir ez-Zor as a way to curb the NDF, essentially farming out demobilization to its foreign ally. Paradoxically, the regime may also be doing the same with Hezbollah or Russia by permitting both to respond to the fighting as a way of weakening wayward militias.

The Assad regime is, of course, walking a fine line with its external and domestic allies. There is a danger that the clashes between militias may spiral out of its control or become further hijacked by Iran as a means to pressure Assad and Russia. Further conflict and out-of-control behavior by loyalist militias harm the long-term standing of the Assad regime in the eyes of local populations. How far Iran is willing to go to establish a firm base in Deir ez-Zor remains to be seen. Then there is the matter of ISIS and the American-led coalition fighting nearby. For the moment the clashes over resources in Deir ez-Zor may be viewed as a macabre means of management of local and foreign allies by the Assad regime.