A fight for survival in a new landscape: Can Yemen’s GPC recover after Saleh? 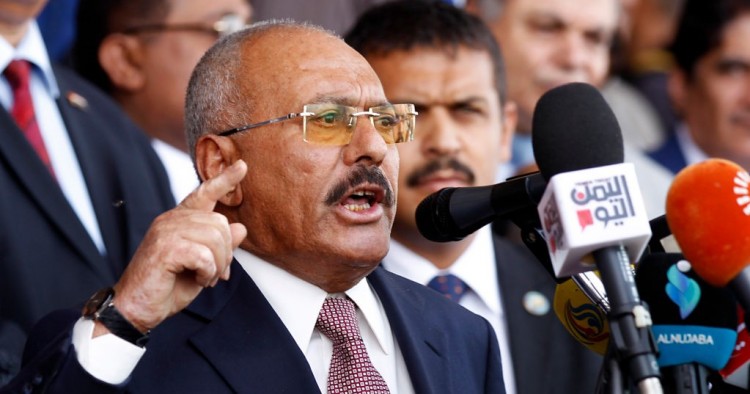 Since the death of its founder Ali Abdullah Saleh on Dec. 4, 2017, the General People’s Congress (GPC) — Yemen’s dominant political party for the past four decades — has faced a test in attempting to reunify its divided wings in Riyadh, Cairo, Abu Dhabi, and Sanaa amid a shifting strategic landscape. The GPC’s factions have competed over the party leadership, failed to elect a transitional leader, and exchanged accusations following the Saudi-brokered meeting in Jeddah in July 2019. Nevertheless, Abu Dhabi and Riyadh’s attempts to revive Saleh’s damaged old political vehicle continue, both politically and militarily.

At the time, many observers felt that Saleh’s death would be the end of the GPC simply because the party was a one-man show — “Saleh was everything,” Fadhl Mohammed, a professor and commentator on Yemeni affairs, said. Some, however, assumed that the party would survive because of its nationalistic values, in contrast to the Yemeni Socialist Party, the influence of which has faded considerably since the unification of the country in 1990. Regardless of whose theory holds true, local and regional developments will largely determine whether the GPC can play a significant role in the post-Saleh era.

Although the party remains fragmented, its growing prominence is based on two key factors. The first is the military. Since his departure from Sanaa amid the Houthi-Saleh divorce in 2017, the power of Brig. Gen. Tareq Saleh — the former president’s nephew and erstwhile head of his Presidential Guard — has grown substantially. In 2018, Tareq formed the Guards of the Republic with Emirati support and gradually assumed military command and control over the west coast the following year. In the hopes of liberating the port city of Hodeida, Tareq’s UAE-backed Guards of the Republic alongside the Giants Brigades and the Tehami Resistance — collectively known as the Joint Forces — launched Operation Golden Victory. The 2018 Stockholm Agreement, however, shattered the goal of liberation, at least for now, but never constrained Tareq’s role on the west coast.

As Stockholm changed the rules of military contact between the Houthis and Coalition-backed forces by freezing the battle of Hodeida, Tareq consolidated his power on the west coast by formally integrating the Tehami and Giants Brigades under the Joint Forces in July 2019 after the UAE announced its military drawdown strategy. This policy immediately deepened the UAE’s indirect involvement in Yemen, increasing its reliance on local partners and proxies, and simultaneously weakened the administration of President Abed Rabbo Mansour Hadi, which Tareq does not recognize. As a result, Tareq now leads, directly or indirectly, a force of more than 20,000 soldiers and controls military sites around the strategic Bab el-Mandeb Strait, including Zuqar Island and Mocha, among others. Expecting the Joint Forces’ recruitment to grow, Tareq’s current relationship with Yemen’s government remains alarming considering his modus operandi outside the auspices of Yemeni military structures, exclusion from the Riyadh Agreement, and alignment with Abu Dhabi. Common opposition to the Iranian-backed Houthis has yet to result in tangible cooperation between the Yemeni government and Tareq, for all that he has shuttled between Riyadh and Abu Dhabi to meet high-level officials.

The second driver of the GPC’s growing prominence is the political situation. The Gulf countries, most notably the UAE and Saudi Arabia, have not conditioned their support for the GPC on the resolution of its intra-party divisions. Rather, quite the opposite. A Yemeni political source, speaking on condition of anonymity, suggested that “Abu Dhabi seeks to revive the GPC through increasing its influence on the ground and across political appointments, regardless of whether the party reconfigures its internal structure.” In April, Yemen’s parliament convened in Sayoun, Hadramawt, for the first time since the outbreak of war, electing Sultan al-Barkani of the GPC as the new speaker of the parliament after lengthy negotiations. Parliament’s revival means that the legitimacy of the Yemeni government now hinges not only on the president, but also on al-Barkani, who appears to be aligned with, if not supported by, Abu Dhabi. A good illustration of this is al-Barkani’s obstruction of a parliamentary statement to condemn the UAE’s attack on Yemen’s armed forces in Aden and Abyan governorates, carried out under the guise of counterterrorism operations, according to the deputy speaker of the house, Abdul-Aziz Jubari.

Following the conclusion of the Riyadh Agreement in November, al-Barkani appeared holding the hand of the UAE’s crown prince, Mohammed bin Zayed al-Nahyan, and the chairman of the Southern Transitional Council (STC), Aidarus al-Zubaidi, a gesture mirroring the alignment between Saleh’s GPC and the UAE. Most recently, Saleh’s eldest son, Ahmed Ali — who once led the Republican Guards and was Yemen’s ambassador to the UAE — extended condolences to the crown prince, together with Tareq and former Foreign Minister Abu Bakr al-Qirbi (who still actively meets with foreign missions and advocates timely reunification of the GPC), on the death of Sultan bin Zayed, the crown prince’s half-brother, in November 2019. In post-Saleh Yemen, Ahmed Ali has had a higher-profile public presence, making an appearance at a reception held for Jordan’s King Abdullah II in May. By appearing with Tareq and al-Qirbi in Abu Dhabi, he signaled the GPC’s growing power and regional partnerships. For now, one part of the UAE’s strategy in post-war Yemen has become clear.

Both Riyadh and Abu Dhabi see considerable upside in supporting the GPC’s resurgence in the post-Saleh era, for two main reasons. First, it can help counter the influence of Yemen’s largest Islamist party, Islah, and second, it can balance against Houthi dominance in heavily-populated northern governorates, although whether such an endeavor is sustainable remains open to question. Abu Dhabi has exhibited greater enmity toward the Muslim Brotherhood and Islamist political parties in the region, including Islah in Yemen, than its counterpart Riyadh has. Although Saudi Arabia and the UAE designated the Muslim Brotherhood as a terrorist group in 2014, the latter views Islah as being affiliated with the group, and thus perceives it as a national security threat.

During the war against the Houthis, the UAE refrained from supporting the liberation of Taiz, like Aden fearful of an Islahi takeover that would strengthen their opponents on the ground. This agenda crystalized in August 2019 when the UAE-backed STC and its military affiliates justified armed rebellion against the Yemeni government in Aden by citing their objective of changing the Islah-influenced government. Demonstrating an ad hoc understanding with the UAE-backed STC, Tareq made clear he appreciated the UAE’s sacrifices in Yemen and implicitly condemned the Yemeni government’s media campaign against Abu Dhabi, calling on the parties to refrain from fabricating a crisis.

With regional interests hinging on the survival of the GPC, the party’s post-Arab Spring crisis endures, with leadership and rehabilitation the key issues. As Saleh’s family and its GPC branch have geared local and regional developments to the party’s advantage in the short-to-medium term, observers wait to see how GPC leaders and Saleh’s family will chart new paths, including by making internal trade-offs, to revive its fortunes. While the GPC works to resolve intra-party divisions and the Sanaa-based branch struggles to oppose Houthi orders as per Saleh’s last statement, the Gulf countries have made their bet, viewing the GPC as useful even in post-war Yemen. Assuming the party can be reunified and rehabilitated, whether the GPC is up to the challenges of the day — after supporting the Houthi coup d’état in 2014 — is something to closely watch as we head toward a nationwide peace process or further internal fragmentation. Looking ahead to Yemen’s post-war political landscape, another party must emerge from the ashes of war, to heal the grievances of the Yemeni people that have accumulated over the last decade.