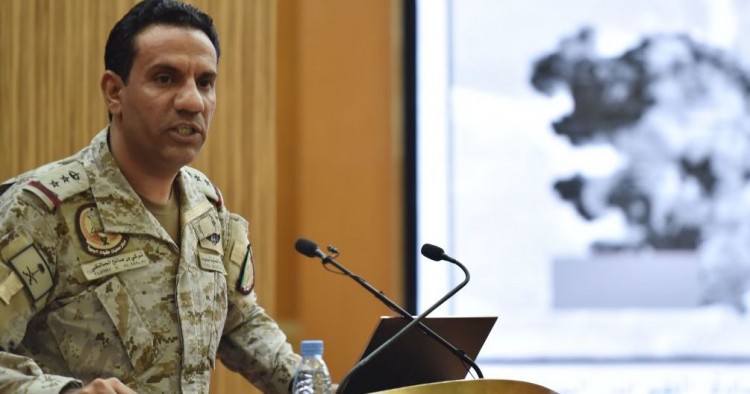 On March 26, 2015, the former Saudi ambassador to the U.S., Adel al-Jubeir, announced the beginning of a Saudi-led military campaign in Yemen to curtail Iran’s influence in the country, reinstate the regime of President Abed Rabbo Mansour Hadi in Sanaa, and deter the Iranian-backed Houthi threat. Five years on, however, the objectives of Operation Decisive Storm are far from realized, and the situation on the ground is as volatile as ever. Iran has stepped up its involvement in Saudi Arabia’s southern backyard, the Houthi rebels have increased their power, and cost of war continues to rise for the kingdom. Far from returning to Sanaa, President Hadi remains based outside the country, in Riyadh, and no longer considers the Houthis as the only threat.

Equally important, the Arab coalition — initially comprising 10 Sunni Muslim countries with strategic U.S. and UK support — has dwindled substantially in both size and power. The minimal participation of Egypt, evident only in its naval presence in the Red Sea, together with Pakistan’s hesitancy to deploy troops due to parliamentary opposition and concerns over ties with Iran, demonstrates that the contribution of some coalition members is purely symbolic. Interestingly, both Kuwait and Jordan have quietly transitioned away from their limited military roles, positioning themselves as facilitators of peace and humanitarian talks between the government and the Houthi rebels.

In June 2017, the termination of Qatar’s participation in the coalition marked the beginning of a decline in the coalition’s soft power, namely, its ability to shape the global discourse on the war in Yemen. Since then, the Qatari state-owned TV channel Al-Jazeera, which has significant regional and international influence, has adopted an anti-coalition line in its coverage of Yemen, hosting Houthi leaders and dedicating tremendous resources to, rightly or wrongly, rebuking Saudi Arabia and the UAE. Not only has Al-Jazeera’s shifting role unquestionably weakened the coalition’s international public image, but more importantly, it has also given the Houthis a platform to regularly voice their views.

Coupled with the Malaysian and Moroccan withdrawal in 2018 and 2019, respectively, the UAE’s phased withdrawal strategy and subsequent Sudanese military drawdown substantially reduced the coalition’s power and international legitimacy. Such structural changes suggest that the coalition will likely continue to fade going forward, falling even further short of achieving its publicly stated objectives.

Fighting within the coalition

In this protracted war, many ironies have emerged, suggesting a loss of strategic direction within the coalition. First, not only has the coalition failed in its initial goal of restoring the Yemeni regime in Sanaa, but it now struggles to reinstate its authority in the interim capital, Aden. Second, rather than put adequate military pressure on the Houthis to negotiate a nationwide peace agreement, it has instead exerted considerable pressure on the government to conclude the failing Stockholm and Riyadh agreements. Third, it now appears the battle is being fought within the so-called Coalition to Restore Legitimacy in Yemen rather than against the Houthis or Iran.

Domestically, the relationship between the Southern Popular Resistance and the Yemeni government, which had collaborated to successfully push back the Houthis from several areas, has soured, forcing the government out of Aden in August 2019 and indirectly returning the governorate of Jawf to Houthi control earlier in March. Since the second year of the war, the UAE has organized the southern resistance under several entities, operating outside of the Yemeni command-and-control structures. While this has resulted in the revitalization of the southern movement more broadly, it has been “undermining the authority of the legitimate government” in liberated territories, according to a 2018 UN Panel of Experts report. The Southern Transitional Council’s (STC) siege of Al-Mashaiq Presidential Palace in Aden in January 2018, the fall of state security provision in Aden to the Security Belt Forces, and the Shabwani Elite Forces’ attempt to assume control over Ataq, Shabwa, in June 2019 are all cases in point. In essence, the ongoing escalations in several southern governorates are part of the STC’s efforts to take on the role of godfather in southern affairs.

Against this backdrop, mounting security threats have prompted the government — including the Islah elite, who fear the risks of Saudi abandonment — to maintain a strong military presence in the Abyan and Shabwa governorates to impede the STC’s expansion to the east, making combat zones vulnerable to Houthi attacks. The STC has shifted the government's focus away from the Houthis in the north, as it fears further erosion of its legitimacy in southern and eastern governorates. For example, even after the recent Houthi advance from Nihm, east Sanaa, to Jawf in the north, the government and the STC sent military reinforcements to Abyan in the south, escalating their political rhetoric to the extent that armed clashes are now looming, five months after the conclusion of the Saudi-brokered deal.

Most recently, Saudi Ambassador to Yemen Mohammed al-Jaber said, “It’s unacceptable for government-affiliated forces to be swaggering in Shoqra [Abyan] … in light of the Riyadh Agreement that seeks to reinstate the government in Aden … while Marib, Jawf, and Dale are under Houthi attack.” Al-Jaber’s statement, alongside an exchange of accusations between the STC and the government, indicates that the kingdom has been bogged down in a series of minor battles between coalition-backed partners, losing focus on the larger military effort against the Houthis. Regardless of why the Saudi-brokered agreement has stalled, the big picture is clear: Fighting within the coalition-backed forces facilitates the Houthis’ unfinished business — capturing more resources and territory.

In contrast to the coalition’s lack of strategy, Iran has strategically increased its overt political and covert military and security support for the Houthis, raising the cost of war for the kingdom by bringing the battle to Saudi territory. Between 2017 and 2018, in cooperation with Tehran-linked technical personnel, and relying on smuggled Iranian military equipment, the Houthis assembled and modified ballistic missiles, remote-controlled explosive boats, and drones. Such technological sophistication has enabled the Houthis to sporadically attack vital Saudi infrastructure, including oil facilities like the Saudi Aramco site in Yanbu, and airports in Abha, Jazan, and Najran. For its part, Riyadh has intercepted more than 232 of the Houthis’ ballistic missiles and has been attacked by more than 258 drones, according to coalition spokesperson Col. Turki al-Maliki.

In the political sphere, Iranian Supreme Leader Ayatollah Ali Khamenei publicly declared support for the Houthis in August 2019, with Tehran upgrading its level of cooperation by welcoming Ibrahim al-Dailami as a Houthi representative to Iran. The Houthis, meanwhile, have supported Iran’s destabilizing agenda in the Gulf region while demonstrating their ability to threaten maritime security in the Red Sea; examples include attacks on Saudi oil tankers and other vessels in 2018, attempts to cover up the September 2019 attack on Aramco oil facilities in Abqaiq and Khurais, the capture of South Korean vessels in the Red Sea in November 2019, and attacks on several “sensitive [Saudi] targets” in February 2020. It is therefore increasingly clear that the coalition’s involvement is only helping to expand Tehran’s influence in Yemen, as well as the scope and extent of the Houthi threat to its immediate neighbourhood — a clear sign of a strategy gone awry to the point that Riyadh now demands the Houthis dismantle their ballistic missile and drone program.

What next: Yet another year of war?

After five years of indecisive warfare, the coalition’s publicly declared objectives remain unrealized. The lack of strategic thinking, planning, and management has hampered any military campaign that could have compelled the Houthis to negotiate peace and reinstated a functioning, uncontested government in liberated territories.

As the prospects of an end to the military conflict remain dim amid worsening intra-coalition tensions, the significance of any politically negotiated settlement soars. Moreover, the Houthi presence in the Marib area must not be underestimated as a potential spoiler to the recent UN cease-fire agreed to by the government, the Houthis, and the STC to prevent the spread of COVID-19: at the time of writing, the Houthis had already reportedly started violating the cease-fire by attacking Sirwah, west of the city of Marib. This indicates that the current balance of power is not conducive to serious negotiations, and that the Houthis are keen to expand their territorial control to increase their leverage in any future negotiations. To engage the Houthis in serious, credible peace talks, the coalition must double down on its political efforts and impose strategic military pressure to improve the government’s position and reduce the perception of a Houthi victory, or else risk paving the way to a seventh year of conflict.