This essay is part of a series that explores the human costs and policy challenges associated with the displacement crises in the Mediterranean and Andaman Seas. The essays consider the myths or misconceptions that have pervaded discussions about these two crises, as well as the constraints or capacity deficiencies that have hampered the responses to them. See more ...

In recent years, migration policies in Europe have been stuck between the responsibilities of single member states and those of European institutions. This puzzle has proved particularly difficult to solve, especially considering how European external borders have been controlled and the procedures for receiving asylum seekers have been implemented.

The New Political Geography of the Schengen Area

The Schengen agreement—ensuring freedom of circulation within participant countries—has profoundly modified the political geography of migration and related policies, leading European states into a new and unknown transnational terrain. As a consequence of the agreement, external borders have been ‘moved,’ coinciding with those of the Schengen area. These borders are easily controlled if they consist of airports, as in the case of France. More problematic, however, is if they consist of either land or maritime borders, as in the cases of Poland and Italy, respectively. At the same time, security checks at the internal borders have been progressively abolished, providing benefits both to E.U. nationals and extra-E.U. immigrants, including illegals.

The inherent contradiction of the Schengen Agreement lies in the pretension of creating a supranational border while assigning border control responsibility only to a small number of states, those bordering non-E.U. countries, which have to identify and repatriate illegal migrants. A further complication occurred when the Schengen area was expanded from the original five signatories[1] to the current 26, of which 22 are E.U. member states.[2] Adding yet another layer of complexity, the agreement has not yet entered force in the case of four of the E.U. member states that have joined Schengen—Bulgaria, Cyprus, Croatia, and Romania. To make matters worse, two other member states, Ireland and the United Kingdom, have exercised the exclusion clause (i.e., they have elected not to sign).

The expansion of the Schengen area, coupled with the E.U.’s enlargement policy has created a paradoxical situation. This situation is exemplified in Malta—an E.U. state since 2004— which has become one of the ‘guardians’ of a border that covers over 6,000 miles and is one of the first destinations for migrants originating from the Middle East and Africa. Whereas other entrance territories, such as Lampedusa in Italy or Ceuta, Melilla, and the Canary Islands in Spain have the possibility of sorting migrants elsewhere, Malta, with its 400,000 inhabitants and a high demographic density, does not. 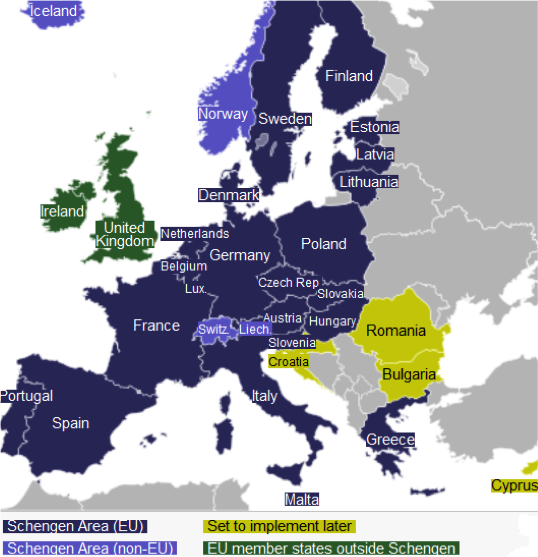 It is clear that the Schengen Agreement is the ‘original sin,’ the primary result of which—it is worth repeating—is that the duty of border monitoring is thrust upon only a few states. This creates important political, social, and juridical consequences for the E.U. Mediterranean countries and—indirectly—for the rest of the E.U.[3]

The diplomatic row in June 2015 between Italy and France[4] illustrates the problem just described. The dispute erupted when France declared that borders with Italy had never been closed, while Italy affirmed that France reintroduced border controls contrary to what was provided in the Agreement. Hundreds of migrants were stranded on the rocks of Ventimiglia (Italy), because France had deployed the military force Compagnie Rèpublicaine de Securitè at the border of Menton (France).

As in a chain reaction, other E.U. countries have subsequently reintroduced border controls within the European Union: Germany with Austria, Austria with Hungary, Slovakia with Austria and Hungary, the Czech Republic with Austria, Denmark with Germany. Outside the area, Hungary has raised a wall at the border with Serbia in order to stop migrants coming in on the Balkan route.[5]

The truth is that E.U. states consider migration as being a sovereignty issue and, therefore, exclusively of national competence. Consequently, they fail to act according to Schengen provisions, especially with reference to the application of the convention. This legislation included—with the abolition of frontiers—a set of countervailing measures to prevent trafficking in humans and goods. To this purpose, Article 17 of the Schengen Agreement states:

With regard to the movement of persons, the Parties shall endeavour to abolish checks at common borders and transfer them to their external borders. To that end they shall endeavour first to harmonise, where necessary, the laws, regulations and administrative provisions concerning the prohibitions and restrictions on which the checks are based and to take complementary measures to safeguard internal security and prevent illegal immigration by nationals of States that are not members of the European Communities.[6]

The Frontex Agency: Bordering the Chaos?

If the aim of Schengen was to facilitate freedom of movement within the European area, the second element was that, from the perspective of a common E.U. migration policy, the Frontex agency would ensure border controls. However, not all member states—both for geographical and political reasons—had the interest in establishing, not to mention financing an agency charged with controlling of supranational borders. Furthermore, Frontex remained behind the scenes for a long time, even after its creation, because of its location in Warsaw, Poland, as well as its deficiencies in personnel and budget. It is clear that these issues had an important impact on the actual effectiveness of the agency, in particular with reference to the most urgent problems on the ‘hottest’ migration routes, such as the Mediterranean. Between 2005 and 2010, because of the stringent specifications, Frontex was confined to the delivery of intelligence tasks, as the elaboration of shared information on migration flows. Frontex has also coordinated some transnational missions on the E.U. borders, in partnership with third countries. The leadership of those missions has always been entrusted to host countries.

Here, from a geopolitical perspective, Italy’s location is fundamental. Italy has become one of the key countries in controlling migration flows toward Europe,[8] despite being unprepared to play this role. Italy’s transformation (since the 1970s) from a country with a great emigration tradition to a new immigration destination—unlike countries with an older migration tradition (e.g., United Kingdom, France, Germany)—has led to an underestimation of the political risks of migration. This has produced a negative impact on Italian immigration and integration policies, as well as on border control management. In short, for nearly four decades, Italy has addressed the migration phenomenon mainly through emergency measures, rather than through long-term, structured policies.

It must be said that, over the years, Italy has developed national immigration legislation and—despite not having its own integration model—has not yet had to deal with the same critical situations as those experienced in the British ‘multicultural’ and French ‘assimilation’ models. A number of intermediary bodies (e.g., NGOs, charities, religious associations) have ensured a successful integration, despite the emergence of xenophobic and racist feeling which has characterized the political speeches of some right-wing parties in recent years.

However, for the past several years combating irregular migration has been a crucial issue not only for Italy but also for other Mediterranean countries, such as Spain, Cyprus, Greece, and Malta. Previously, their external migration policies had been focused on Libya, Tunisia, and Morocco, from which the majority of irregular flows usually began. Besides bilateral cooperation agreements, significant initiatives at the European level were necessarily adopted, as well as other cooperation tools between the European Union and third countries.

During the past few years, the Italian government has signed a series of bilateral agreements with immigrant source countries, and has, at the same time, supported initiatives by Brussels aimed at improving the effectiveness of migration policies. In December 2000, for example, Italy and Libya signed an agreement to pursue cooperation in migration management on the sea. However, this agreement, which entered into force in 2002, yielded no concrete results until six years later, with the signing of the Benghazi agreement. The latter agreement entrusted the border control system to Italian companies, which were tasked with stanching the flow of migrants into Libya; and committed Rome and Tripoli to preventing the root causes of this migration. Yet, by the time of the fall of the Qaddafi regime and the consequent geopolitical chaos, this collaboration had yielded mixed results, at best.[9]

It is also important to remember the Lampedusa tragedy, which occurred in October 2013, when nearly 400 migrants[11]—the majority from Eritrea—died. This tragic episode led to the launch in Italy of operation Mare Nostrum, which began in October 2013, and involved an impressive employment of human resources and technology. More than 900 military personnel served daily in this operation, along with Red Cross and specialized social and health workers. The economic balance for Italy was quite important: the country spent 114 billion Euros over one year, or about 9.5 billion per month. There were more than 500 operations, 700 smugglers were arrested, 6 ships seized and 160,000 people rescued.[12]

The United Nations paid tribute to Italy for its efforts, but at the same time the country was left to its own devices by other E.U. member states in the management of operations, despite repeated appeals from various international authorities.[13]

The scenario is further complicated by the latest issue: the Common European Asylum Policy. Especially within the last decade, the Dublin Regulation has remained active only in its formal aspects, on the basis of a tacit compromise between E.U. Mediterranean and Continental countries. According to this compromise, Mediterranean countries have always been responsible for the management of first assistance to asylum seekers. This process turns a blind eye toward migrants who refuse to register in the first country of arrival, as they prefer to ask for asylum in Northern Europe. For this reason, Sweden hosts the highest number of refugees per capita (2,359 per one hundred thousand inhabitants against 254 per one hundred thousand inhabitants in Italy),[14] while in absolute terms, Germany has the most, with one in three asylum requests of the total in Europe.[15]

This tacit agreement brought mutual benefits for the parties involved, and has been considered as a valid alternative to a ‘real’ asylum policy. Member States were essentially refusing to abandon their sovereignty on migration issues and preferred to adopt a questionable system, rather than a performing and effective one.[16] This system worked until 2011, with the combination of the Arab Spring[17] and Syrian War, which have shaken the geopolitical balances of the Mediterranean’s southern shore and started the most important refugee crisis since World War II.

It is clear that migration flows, for geopolitical, economic, and demographic reasons, will not stop in the near future. The management of these movements, together with their political, social, and economic implications, must be European. Given their ageing populations and high social welfare expenditures, European countries need an infusion of young people into the labor force, including through immigration. They also need a renewed awareness to overcome egoistic, national attitudes and to reaffirm the values of E.U. integration—values which represent the reasons why migrants decide to settle in Europe and which are inalienable for Europeans themselves.

[4] Already in 2011 Italy decided to give a temporary stay permit (valid for six months) to refugees who arrived in the country between January and April. France opposed the decision as it allowed refugees to enjoy the freedom of circulation right given by the Schengen Agreement.

[8] It is worthy to say that in the most recent years the Balkan route is the most critical one, mainly for migration flows coming from Syria and other non-stable area as Afghanistan.

[13] In November 2014 a new E.U. mission began. Triton, financed with 2,9 billion Euros per month, was coordinated by Frontex with the aim of border control but not the duty of saving lives. Italy has participated in the mission making available half of the total vehicles employed.