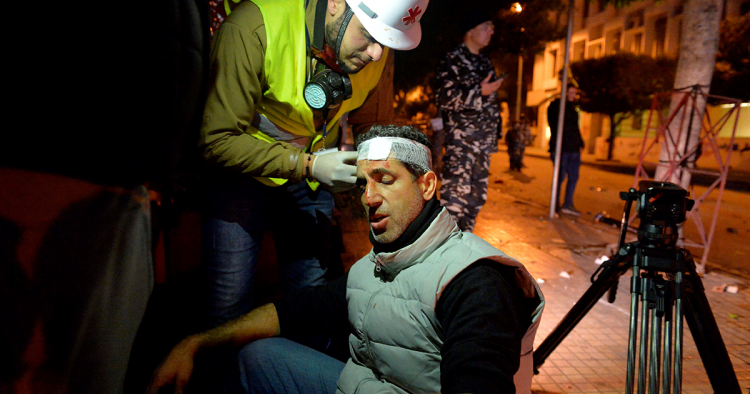 Mariam Seif Eddine is a Lebanese journalist known as a staunch critic of Lebanon’s corrupt ruling elite and of Hezbollah’s role in the country.

Since the nationwide uprising began on Oct. 17, 2019, Seif Eddine has been subjected to a vicious cyberbullying campaign — insulted, threatened, and accused of being a foreign agent.

Armed men, including one of her own family members who she said is a member of Hezbollah, twice attacked her family in their home in Beirut’s southern suburbs, a Hezbollah stronghold. The attackers broke her brother’s nose,1 punched her mother and father in the face,2 hurled sexual insults at her, and threatened to kill her family members as one of the men brandished a gun.3

At every point, the Lebanese authorities failed to protect Seif Eddine and her family. When she went to the police station to file a complaint, she was instead interrogated on criminal defamation charges that the attackers had filed against her. The officers refused her access to her lawyer, briefly detained her, tried to intimidate her, and then leaked details of the investigation to the media, Seif Eddine said.4

Fearing for her safety, Seif Eddine and her siblings have moved away from home. Neither her attackers nor the police officers who violated her rights have been held accountable.5

Unfortunately, Seif Eddine’s case is not unique. Journalists, media workers, and activists in Lebanon — especially critics of the ruling elite and established political parties — are coming under increasing threat both by private parties, with the authorities unwilling or unable to protect them, and directly by government authorities, often with impunity.

A worrying and worsening trend

The free speech situation in Lebanon, as well as the impact on media freedoms, has deteriorated so much in the last couple of years that Human Rights Watch and 13 other Lebanese and international organizations created a new coalition to jointly tackle the authorities’ attempts to increase repression.

The assassination of Lokman Slim, a prominent intellectual and Shiite Hezbollah critic, by unidentified assailants on Feb. 4, was the most egregious case yet. Three months later, Slim’s family has not been able to get any meaningful information about progress in the investigation, and many fear that it will go the way of so many other investigations into political assassinations in Lebanon over the past two decades — nowhere.

According to the Samir Kassir Eyes Center for Media and Cultural Freedom (SKeyes), a media and press freedom watchdog in Beirut, 106 media workers6 have come under assault from non-state actors between the start of the uprising in October 2019 and March 2021. Though many of these attacks were captured on camera, accountability has been elusive, further emboldening attackers.

In many other cases, government agents were the attackers. SKeyes said that they documented 80 assaults7 by government agents on media workers doing their jobs, primarily covering protests, between October 2019 and March 2021. I was among them. A soldier punched me in the face as I filmed the Lebanese army’s attack on largely peaceful protesters on Aug. 8, 2020.

Despite the overwhelming amount of video and photographic evidence of these attacks, not a single member of the security forces has been held criminally liable. Security forces have also repeatedly declined our requests to provide information on their internal investigations and disciplinary measures against those involved in the attacks.

While the attackers go unpunished, an increasing number of journalists and activists are being prosecuted and called in for interrogation on vague criminal defamation charges brought by the public prosecutor or by powerful political, financial, and religious figures who have increasingly used these laws to retaliate against and silence criticism. Convictions can lead to prison terms of up to three years, fines, or both.

In the same way that Seif Eddine’s attackers used the criminal defamation laws to retaliate against her, State Security officials did so as well against actor Ziad Itani when he publicly criticized them for leaking videos of his interrogation on trumped up charges to the media. Some defamation cases brought by influential people have bordered on the absurd, like when four Lebanese lawyers linked to a political alliance filed a complaint against The Economist, accusing it of damaging Lebanon’s reputation and insulting the Lebanese flag in its reporting on the country’s dollar shortage. Or when a journalist, Amer Chibani, was interrogated for three hours after he posted on Twitter that his local bank was not dispensing dollars.

Unabashed statements by top officials about their intentions to silence criticism have become commonplace. Last June, in the midst of Lebanon’s economic crisis, the top public prosecutor tasked a security agency with investigating social media posts that are offensive to the president — a “crime” punishable by up to two years in prison.

Lebanon has been able to maintain its image as a beacon of free speech in an authoritarian region by rarely jailing journalists — and due to the rest of the region’s absolutely dismal record. Although most cases do not reach the courts, over the last several years, security agencies have summoned thousands of people for lengthy interrogations. In many cases, those interrogated have said the physical and psychological interrogation tactics used seemed intended to humiliate, punish, and deter them from publishing content deemed to be insulting to or critical of powerful people.

The Cybercrimes Bureau — an Internal Security Forces (ISF) unit tasked with combatting cybercrime and enhancing online security — told Human Rights Watch that it had conducted 4,154 defamation investigations between Jan. 1, 2015 and Dec. 7, 2020.8 This number is not exhaustive, and we have documented such interrogations by other security agencies, including General Security, State Security, and Military Intelligence. As each security agency is informally under the influence of a political party, party officials have used the agency loyal to them to intimidate critics.

One of the first battles of our new coalition is around a new media law being debated in parliament. Despite repeated promises by members of parliament (MPs) to involve civil society in the drafting process, the engagement has not been meaningful. Meetings of parliamentary committees tasked with reviewing and amending the law are not announced or open to the public.

MPs have refused to even provide us with an updated version of the law, though we were able to obtain an unofficial, leaked version from April 2019. While this draft would prohibit pretrial detention for publishing crimes, including those on social media, it would not eliminate prison sentences for alleged defamation and, in some instances, would increase prison time and multiply fines. If that version is passed, it will set Lebanon even further behind in protecting free speech and the free press.

To regain its place as a beacon of free speech in the region, Lebanon should urgently decriminalize defamation. Criminal penalties are always disproportionate punishments for reputational harm and should be abolished. As the repeal of criminal defamation laws in an increasing number of countries shows, such laws are not necessary. Civil defamation and criminal incitement laws are sufficient for protecting people’s reputations and maintaining public order, and they can be written and carried out to include appropriate protections for freedom of expression.

But until these legislative changes are adopted, the justice minister should instruct all government officials to refrain from filing criminal defamation complaints on their own behalf or on behalf of the institutions they serve. The public prosecutor should also stop filing criminal charges against individuals who defame the president or the military, and he should instruct security agencies not to summon, investigate, or arrest people solely for peacefully expressing themselves.

The authorities should also make it clear that attacks against media workers will not be tolerated, and that anyone responsible for such attacks — non-state actors and security forces alike — will be held accountable through swift and transparent proceedings. In order to regain the public’s trust, the security agencies should make public all the disciplinary proceedings they have taken since Oct. 17, 2019 against their members who have been found to be responsible for assaults against media workers. The public prosecutor should also instruct security agencies to quickly investigate and refer to the judiciary the many complaints media workers have filed against the individuals who have attacked them.

At the end of the day, Lebanon needs to decide what kind of country it wants to be: one that like some others in the region controls and dictates public discourse, or a beacon of tolerance and a center for lively debate and discussion.

Aya Majzoub is the Lebanon researcher at Human Rights Watch. The opinions expressed in this piece are her own.

1. HRW has the forensic report.

2. HRW has the forensic report.

3. HRW has a copy of the transcript of the camera recordings around Mariam’s house, which were submitted to court as part of her criminal complaint against the attackers.

5. In an interview with Dalia Chehade, Mariam’s lawyer, on Jan. 18 (she confirmed this is still the case via WhatsApp).

8. Response from the ISF to HRW’s letter asking for these numbers (numbers were given orally via phone).