The future of US cooperation with Pakistan 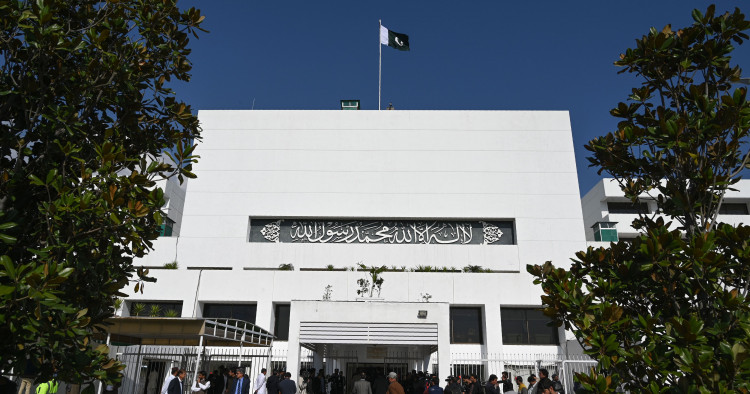 The United States and Pakistan have had a complex and often disappointing "love-hate" relationship since 1947 — one severely tested during the 20-year U.S.-led intervention in Afghanistan. We believe the time has come for serious policy consideration of whether and how both nations can achieve a more strategically beneficial and sustainable post-intervention relationship between the American and Pakistani governments and their populations.

As we consider a new policy, the U.S. military withdrawal from Afghanistan after two decades of leading the international coalition is almost complete. Early indications are that Afghanistan is increasingly likely to descend into significant instability and possibly serious fracture, which will have unwelcome consequences for the Afghan people and all of Afghanistan's neighbors. It is already clear that international terrorist groups like al-Qaeda and Islamic State-Khorasan Province will continue to enjoy and probably grow their safe havens.

Whatever U.S. strategic concerns may be about the future of Afghanistan, the course and direction of Pakistan's strategic choices in coming years will also matter to the United States. There are a variety of reasons for this.

First, Pakistan is a nuclear weapon state. Decades of investments in nuclear weapons by Pakistan and India, compounded by unrelenting and mutual historical, religious, cultural, and political antagonism between them, make this one of the world's most dangerous flashpoints.

Second, all of the countries Pakistan borders are consequential for the U.S. Pakistan also has significant religious, cultural, and economic ties to other Muslim states such as Turkey and Saudi Arabia. In an era of “great power competition,” while Pakistan may not be one of the principal players, its network of relationships can be of strategic benefit to any of the great powers now involved, including the U.S. and China.

Third, despite its significant political and economic difficulties, Pakistan has a growing technology sector. Its youthful population and worldwide diaspora of Pakistani doctors, scientists, academics, and other professionals have become an increasingly important part of the global community.

As long-time veterans of South Asia, both of us understand the sources of "weariness and wariness" that U.S. policymakers, in both Democratic and Republican administrations, often associate with strategic discussions of Pakistan. We have both seen the U.S. government's reluctance toward undertaking any kind of strategic interaction or rapprochement with Pakistan because of previous disappointments or perceived betrayals. Understanding the enormous complexities of Pakistan's relationships, influence, and strategic choices in the South Asia milieu can be intellectually challenging and draining.

Yet, we have both concluded that the only thing harder than establishing a functional and mutually beneficial relationship with Pakistan is living without one. Given unstable borders, a nuclear standoff with India, the continued presence of terrorist organizations, and the high potential for all of this to further disrupt our interests, there is no better alternative.

Among those areas that we believe worth exploring with the Pakistanis are these:

First, the possibility of planning, along with other like-minded international actors (both state and non-state), to manage the consequences of significant political instability and human suffering emerging from Afghanistan, including the possibility of substantial refugee flight into Pakistan. Indeed, the Pakistanis have long and miserable memories of the surge of Afghan refugees after the Kabul government collapsed in the 1990s and have consistently expressed deep concerns about a possible repeat resulting from the U.S. withdrawal now nearing its completion.

Second, the possibility of counterterrorism cooperation against any terrorist threat that emerges from Afghanistan and prevents it from sowing further instability across the region. We do not consider it likely that Pakistan will allow any positioning of U.S. intelligence or counterterrorism elements within its borders. Still, there may be other ways (e.g., working groups, forums, or exchanges) to foster better cooperation if a threat emerges from Afghanistan that is of concern to our mutual interests.

Third, the possibility of enlisting Pakistan cooperation, and that of India, toward some type of partial de-escalation of tensions along their common border and, with it, even a slight amelioration of the nuclear weapons threat. It is instructive to recall that, before 9/11, Pakistani President Pervez Musharraf and Indian Prime Minister Atal Bihari Vajpayee initiated a dialogue about the de-escalation of tensions that included the highly emotional issue of Kashmir. However, talks broke down without significant agreement. While we recognize this is an extraordinarily complex and fraught issue for the U.S. to embrace, given all of its other strategic challenges, the specter of a potential nuclear conflict in South Asia should at a minimum prompt us to ask ourselves, "why not at least try?" Indeed, U.S. antagonists such as China would probably take a dim view of such efforts, and we believe that might be a reason for doing so rather than a reason to flinch from it.

We have long heard U.S. policy and operational practitioners cite phrases such as "never underestimate the Pakistanis’ ability to disappoint us." But, unfortunately, most American policymakers do not understand how often we have heard the Pakistanis say the same thing about Americans. Thus, both sides have longstanding "neuralgias" about the other. As we end our Afghan campaign, now is the time to move beyond our neuralgias and carefully weigh the strategic costs of whether trying to somehow partner with Pakistan is more, or less, than the cost of failing to do so. We believe, in the long run, it is likely to be less costly.

Lt. Gen. (ret.) Michael K. Nagata is a distinguished senior fellow on national security at MEI. He retired from the U.S. Army in 2019 after 38 years of active duty, with 34 years in US Special Operations. His final position was director of strategy for the National Counterterrorism Center from 2016 to 2019.

Gen. (ret.) Joseph L. Votel is a distinguished senior fellow on national security at MEI. He retired as a four-star general in the U.S. Army after a nearly 40-year career, during which he held a variety of commands in positions of leadership, including most recently as commander of CENTCOM from March 2016 to March 2019. The views expressed in this piece are their own.