The Future of U.S. Military Aid to Egypt 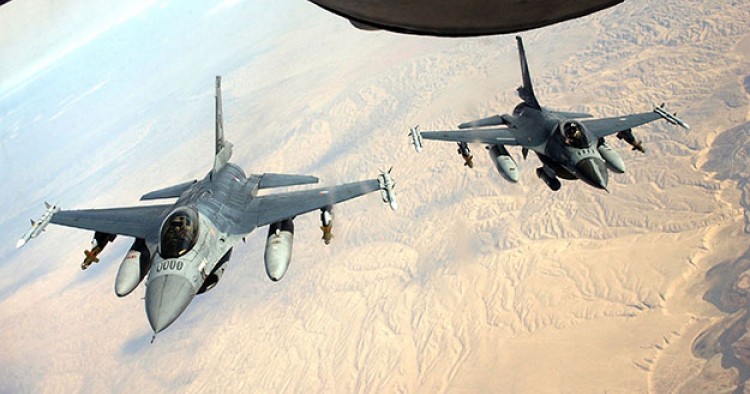 Yesterday, the United States announced that it would delay the delivery of four F-16 fighter jets to Egypt.[1] While such a move might appear to signal a block in U.S. military aid to the country, most Egyptians believe that the United States will, as it always does, provide Egypt with military funding. Egypt has been the second-largest recipient of American foreign aid since 1979, the year that the Egypt-Israel peace treaty was signed, and the vast majority of that assistance has been focused on the military.[2]

Egyptians are aware that whether or not the F-16s are delivered at a later date, the fact remains that all other forms of American military aid to and support for Egypt—from the annual $1.3 billion in funding[3] to the biennial Operation Bright Star, in which Egypt and the United States engage in joint military exercises—are still ensured.

Indeed, Washington has been careful not to officially call recent events in Egypt a “coup,” as doing so would require it to forego all military aid to Cairo. In his announcement of the Obama administration’s decision not to use such nomenclature,[4] White House Press Secretary Jay Carney focused on the “significant consequences that go along with this determination”[5]—meaning U.S. military aid.

Senators such as John McCain and Carl Levin have recently called for military aid to Egypt to be cut,[6] and Congress has made similar threats in the past.[7] In particular, strong calls to cut aid arose in 2011 during the revolution and its aftermath. As Mubarak’s influence waned, many questioned the wisdom of providing so much military aid to a country with no established power structure.

The aid, however, was never in any real danger. Admiral Mike Mullen, Chairman of the Joint Chiefs of Staff at the time, explained that continuing aid serves U.S. interests, citing the strong military relationship between the two countries and describing the funds as “an investment that’s paid off over a long period of time.”[8] Egyptians are confident that Washington values Egypt as an ally in the region and would likely only cut off aid if Egypt made a highly improbable move such as annulling the peace treaty with Israel.

Hillary Clinton, in her public statement waiving conditions on aid last year, also noted the strong security partnership between the nations and described Egyptian military aid as “[enabling] cooperation on shared interests.”[9] Secretary of State Kerry’s administration has voiced similar views.[10] It is difficult for Egyptians to imagine that any U.S. administration would risk its special relationship with Egypt by slashing this funding.

It is precisely for these reasons that American saber-rattling about cutting aid—both recent and over the past 40 years—appears to be a hollow threat. In fact, U.S. military funds to Egypt have never been cut. Egypt understands how important its role as a Middle Eastern ally is to the United States, and it reacts to posturing about cuts with indifference. Mubarak, for instance, did not hesitate to imprison opposition members Saad Eddin Ibrahim (a dual Egyptian-U.S. citizen) and Ayman Nour though Washington, including members of Congress, voiced protest. Despite threats to remove military funding at the time, Mubarak did not yield and only released the two men on his own terms.

The changing of the guard

Another factor that signals to Egyptians that military aid will continue to flow to their country is that American-trained officers now occupy most of Egypt’s top military positions. The United States gave aid for decades to a military bureaucracy headed by Mohamed Tantawi, a graduate of the Soviet school of military leadership who had a history of fighting in conflicts against Israel,[11] along with his chief of staff, Sami Enan. The United States saw this Soviet-trained “old guard” as resistant to change.[12] Morsi overhauled the military leadership last August, removing Tantawi and Enan and appointing a new defense minister, Abdul Fattah el-Sisi, and chief of staff Sedky Sobhi.[13] Both men are graduates of the U.S. Army War College in Pennsylvania.

Egyptians remember that Leon Panetta, Secretary of Defense at the time, expressed his pleasure with the appointment. Panetta noted el-Sisi’s commitment to both the Egypt-Israel peace treaty and the U.S.-Egyptian military alliance, and particularly focused on el-Sisi’s ties to the U.S. military establishment, emphasizing that he “has trained and spent a lot of time in the United States.”[14] El-Sisi was also described by a senior administration official as “someone who we've worked with for a long time, who has shown himself to be eager to work with the United States, who sees the value of peace with [Egypt's] neighbors.”[15]

Hence U.S. military leaders now feel confident that their Egyptian counterparts are approaching problems from the same perspective, and see an opportunity for unparalleled closeness in relations between the two countries. Continuation of aid will foster these relations.

Though Washington will continue its threats to end military funding to Egypt, cuts seem highly unlikely. The military relationship between the two countries is stronger than ever, and changes in shared security interests caused by the revolution have largely been exaggerated. Even as turmoil in Egypt increases and its political future grows more unpredictable, the Pentagon appears to be confident in the Egyptian military’s new leadership. From the American perspective, military aid to Egypt is beneficial. Thus, accusations that the Obama administration is supporting the Muslim Brotherhood via the delay in supplying the F-16s at this juncture must be put in context.

Any end to the aid would more likely be an Egyptian decision. One might wonder why Cairo would decide to refuse what is essentially free funding from the United States. Egyptian leaders are subject to the same pressures that drive the Obama administration to threaten aid: domestic pressures. While domestic pressures in Egypt do not necessarily affect foreign policy, groups from all parts of the political spectrum are directing anger at the United States. In the Middle East, only one candidate—outside of Israel—is ideal for the role of scapegoat. Though it would be an act of desperation, refusing aid from the United States could be a last resort for a ruling party trying to curry favor with an increasingly restive populace.