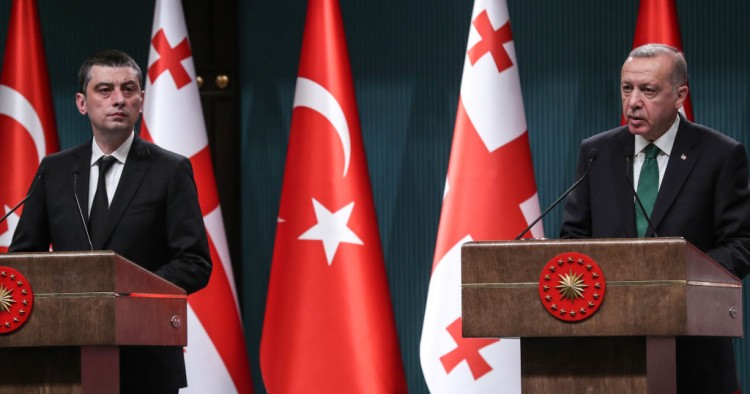 Since regaining its independence nearly three decades ago, European aspirations have been a central part of Georgia’s political agenda and identity. The former has primarily taken the form of the country’s efforts to join the European Union (EU), a process that has not been consummated but that has made significant progress. The Association Agreement between Georgia and the EU, adopted in 2014, the signing of the Deep and Comprehensive Free Trade Agreement, accession to the Council of Europe and its Presidency for 2020, as well as the visa-free regime are other examples. Georgia’s efforts to present itself to the world as European, stressing its historic ties to the region and its Christian identity, are examples of the latter.

Georgia’s European aspirations are framed by the fact that it considers itself closer to Europe than the Middle East, both culturally and politically, and seeks affirmation in this regard, along with the European economic and political goods that come from that affirmation. However, from a geographical perspective, Georgia’s European identity is less clear. To the extent that physical proximity and geography matter, Georgia is closer to the Middle East than to Europe. To put it in perspective, Tbilisi, roughly due north of Baghdad, is well to the east of Jerusalem. Tbilisi is more than 2,000 miles from Brussels, much further than the distance from Brussels to any European capital aside from Nicosia in Cyprus. The closest EU member state to Georgia is Bulgaria, which at the closest point is well over 700 miles away.

Geography may, as the saying goes, be destiny, but only partially. Georgia cannot up and move closer to Europe, but neither can the Georgian people simply abandon their understanding of themselves as European. Georgia is thus, in a meaningful sense, part of both greater Europe and the greater Middle East. Europeans can use that as a way to exclude Georgia, just as Middle Eastern states can use that to limit their relations with Georgia, but both Europe and the Middle East would be much wiser to recognize its unique value to them precisely because the country straddles these two regions so effectively.

While not all countries in Europe are as physically close to the Middle East as Georgia, many European countries have ties to the region that are at least as deep as Georgia’s. Colonialism, postwar immigration, and conflicts going back centuries have made the two regions all but inseparable. It is difficult to imagine the Middle East today without the influence of France, the UK, and other European powers, just as modern Europe is unimaginable without Middle Eastern influence over the centuries on everything from architecture and science to food and contemporary urbanism.

In many respects, Georgia’s paradox of European aspirations and Middle Eastern realities is what makes the country so potentially valuable to Europe. A Georgia that becomes more integrated into Europe will offer Europe more opportunities for trade and ties with the Middle East, based in a country that is increasingly European feeling. Accordingly, a European Georgia, strongly identified and allied with Europe and the West, would be an extremely valuable part of Europe, both strategically and economically.

This vision remains aspirational as there is still work to be done on the part of both Europe and Georgia. Georgia must get its journey toward consolidating its democracy more clearly on track while Europe, for its part, must resolve problems such as Brexit and once again be open to expansion and more creative strategic thinking

Georgia would benefit from recognizing that, while its aspirations are important, realities cannot be ignored either. The Middle East is not going to recede into the distance. It is more likely that the Middle East will become more important for Georgia as political tensions and economic activity in that region continue to have an impact on the country. Georgia has made strides toward striking the right balance between its political aspirations and political realities in recent years, as it has expanded trade, tourism, and various other kinds of contacts with Middle Eastern countries while continuing to pursue its goal of increased integration into Europe.

This balance may also help Georgia develop a more realistic view of Europe. For years, Europe has been framed by the Georgian government as the deus ex machina that can solve all of its problems, suggesting that once Georgia joins the EU, the negative aspects of its recent history and post-Soviet legacy will fade away. Given the state of the EU now, what was once a flight of fantasy is simply a delusion. Georgia would be well served to understand that and continue to embrace both its aspirational identity and geographic reality.

Lincoln Mitchell is a political analyst, pundit and writer based in New York City and San Francisco. Lincoln works on democracy and governance related issues in the former Soviet Union, Eastern Europe, the Caribbean, the Middle East, Africa, and Asia. Follow Lincoln on Twitter @lincolnmitchell.​​​​ The opinions expressed in this article are his own.