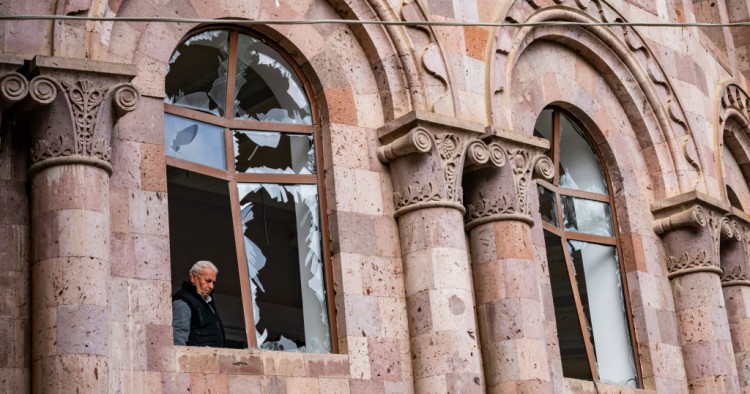 It has now been more than two weeks since fighting flared up along the frontlines of the Nagorno-Karabakh conflict. Far from being a small skirmish like the fighting was in July, the current fighting is taking place along the entire frontline. On October 2, the U.S., along with Russia and France, issued a joint statement as the three co-chairs of the Minsk Group for an end of hostilities and the resumption of talks. A ceasefire was announced on October 9 following ten hours of negotiations in Moscow, but the agreement was almost immediately challenged by mutual claims of violations.

The Republic of Georgia is located right in the middle of this current storm. One only has to look at a map to see Georgia’s predicament. Georgia shares a land border with Russia, Turkey, Armenia, and Azerbaijan— all countries that are involved, one way or the other, in the current conflict. While Georgia does not share a border with Iran, another regional actor that has historically played a role behind the scenes in Nagorno-Karabakh, Tehran’s presence is never far away in the South Caucasus.

Many Georgians, at least privately, empathize with Azerbaijan’s position. After all, Armenia’s occupation of parts of Azerbaijan is no different from Russia’s illegal occupation of the Tskhinvali region (South Ossetia) and Abkhazia in Georgia. But Georgia has to balance its emotions of empathy with its geo-political reality. Consequently, Georgia is trying to walk a diplomatic tightrope during this conflict. This is both a reasonable and responsible approach.

On October 3, the National Security Council of Georgia released a statement about the conflict between Armenia and Azerbaijan. The statement stressed that “Georgia enjoys good neighborly relations with Azerbaijan and Armenia” and that Tbilisi wants to keep it that way.

The National Security Council statement also stated Georgia’s willingness to serve as a mediator in conflict. In 1994, the Organization for Security and Cooperation in Europe (OSCE) established the Minsk Group tasked with bringing lasting peace to the Nagorno-Karabakh war. However, over the years little progress has been made.

While Georgia alone is unlikely to bring the warring parties to a negotiated settlement, they might be able to use its influence behind the scenes to help bring the parties at least to the table. While Georgian efforts may not lead to a breakthrough, Tbilisi should still be applauded by the U.S. for taking a leadership role.

Georgia also announced that it was temporarily suspending the issuance of permits for military cargo transiting through its territory to either Armenia or Azerbaijan. This is an understandable move, especially at a time when there’s been so much finger-pointing about outside powers arming both Armenia and Azerbaijan. The last thing Georgia wants to do is get caught in the middle. Also, this move could be seen as a confidence building measure for any role Tbilisi might play as a mediator.

There are some significant domestic reasons that influenced Georgia’s decision making on the Nagorno-Karabakh conflict.

National elections are coming up the end of this month and Russia will take advantage of any issue to further divide Georgian society. In the case of the Nagorno-Karabakh conflict, the Kremlin will focus on the Azeri and Armenian minorities residing in Georgia. While these minority groups are small, they are not insignificant.

In particular, the Armenian minority has been restless since the fighting started and disinformation has already targeted them claiming that Georgia was arming Azerbaijan and blocking humanitarian aid to Armenia. Even the Armenian Embassy in Georgia refuted these accusations.

Most of Georgia’s ethnic Armenians live in Samtskhe–Javakheti. This community tends to be more sympathetic to Russia than other minority groups in the country making them more susceptible to Russian disinformation campaigns. A large number of Javakheti Armenians hold Armenian passports, making it easier to find seasonal work in Armenia and Russia.Until its closure in 2007, the Russian military base in there was the single largest source of employment in Samtskhe–Javakheti.

Armenian separatism in Samtskhe–Javakheti used to be a problem. While separatist feelings might not be as prevalent today as they were in the past, there is still a fear that Moscow could easily re-energize separatist movements in the region.

There is also a concern that Russia could exploit tensions in the ethnic Armenian-populated Samtskhe–Javakheti in order to create a sphere of influence, linking Russia with Armenia through the Tskhinvali region and Samtskhe–Javakheti. If the situation gets really bad in Nagorno-Karabakh, ethnic Armenians might even call for the central government in Tbilisi to allow a "humanitarian corridor" to be established connecting Russia to Armenia though Georgian territory. Obviously, this would not be welcome.

Moscow has a track record of taking advantage of ethnic divisions and tensions in the South Caucasus to advance pro-Russian policies that are often at odds with America’s or NATO’s goals in the region. Georgians know this better than anyone. With a major conflict happening mere miles away, and with a national election occurring in a few weeks’ time, Russia will be exploiting the current situation to its advantage in Georgia.

In a region as complicated as the South Caucasus it is right for Georgia, at least publicly, to perform a balancing act when it comes to Nagorno-Karabakh. It remains to be seen how long Georgia can maintain this position of neutrality. The answer to this probably depends on two things: how long the conflict in Nagorno-Karabakh will last and how aggressive Russia will be in terms of getting involved.

Ultimately Georgia wants peace and stability in the region. Between Tskhinvali, Abkhazia, and Nagorno-Karabakh there are 15,000 square miles of illegally occupied territory in the South Caucasus. While it is impossible to calculate, these frozen conflicts must cost the region billions of dollars in economic activity and foreign investments every year.

If any country knows the benefits of regional cooperation it is Georgia. Due to its geographical location Georgia has benefited greatly from its trade, energy, and economic relationship with Azerbaijan. There are many in Georgia who are waiting for the day that this cooperation can be extended to Armenia too.

Far from being just a localized conflict in a place far from Washington, DC, the fighting between the Azerbaijani and Armenian militaries and Armenian-backed militias in Azerbaijan’s Nagorno-Karabakh region could destabilize an already fragile region even further.

This is why Georgia is doing its part, no matter how minor, to help bring peace and stability.