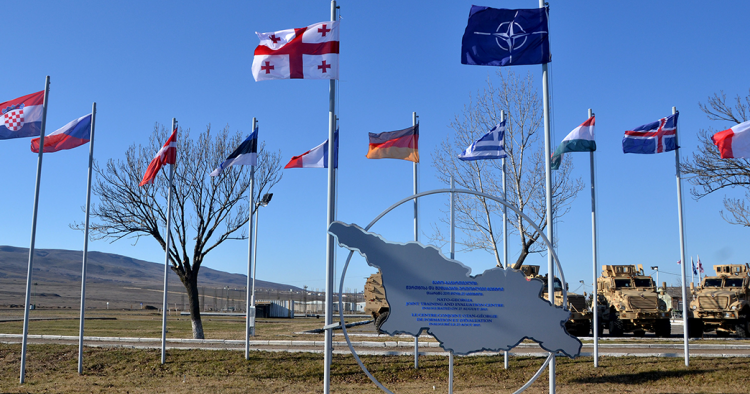 Amid heightened tensions between the U.S. and Russia over Ukraine, the issue of Georgia’s path to NATO membership is once again in the spotlight. While Tbilisi has made real progress in its military reform efforts, the major hurdle is political, not military, in nature and until the Alliance can achieve consensus, the future of Georgia’s relationship with NATO will remain uncertain.

In March 2019, then-Georgian Defense Minister Levan Izoria heralded a new era in military reform: “In the past we trained our soldiers for external deployment, but the new emphasis is now on self-defense” — or rather territorial defense, a process that began to be addressed by U.S.-based military advisers in July 2016. An unnamed Georgian military officer added: “We are preparing for a very different war. It would not last five days [like the August 7-12, 2008 war]; it would be longer and bloodier. Every mountain, every tree would fire on Russian troops if they invaded.”

Such a war effort, however, requires unwavering national support and not just military capabilities. In other words, the new military strategy requires not just military, National Guard, and well-trained Reserve Forces, but the engagement of the entire population. A full-scale deployment could be called a Home Front exercise, similar to the preparations of the Israelis, but such an initiative has not yet been undertaken by the Georgian government. This exercise would require not just budgetary resources, but also educating the Georgian populace that only well-trained Georgians fighting alongside the armed forces can withstand Russian military aggression, because external support may come too late to save the country or may not come at all.

Georgia has a well-trained military that gained combat experience in Afghanistan and trains with the U.S.-led NATO forces in the “Noble Partner” and “Agile Spirit” annual military exercises. But it lacks well-trained Reserve, Air, and Naval Forces to complement the Land Forces and the National Guard in a war. (Georgia has a Coast Guard but this force is not equipped for military conflicts or war.)

It should be stressed that even if Georgian military reforms are successful, the country will not be integrated into NATO without some democratic reforms, as in the end this decision is made by politicians and not military commanders. This reality should be accepted by all Georgians. In spite of the uncertainty about NATO membership, Georgia currently collaborates with and receives military assistance from EU and NATO countries that are wary of Russia.

The Land Forces, especially with U.S. assistance, are well positioned at the battalion level (up to 1,000 troops), but combat with combined arms and the coordination of different military branches are still developing and require additional training.

Georgia urgently needs additional air-defense systems as well, especially radar systems, to monitor the entire airspace below the civil controlled space. Controlling airspace is important, but defending it is essential, so Georgia needs overlapping military and civilian air defense systems. The recent conflict in Nagorno-Karabakh highlighted the importance of unmanned aerial vehicles (UAVs) and combat UAVs, such as drones, which Azerbaijan deployed against Armenia to great effect. Georgia also needs to develop defensive UAV systems to neutralize a potential attack from Russia.

The Coast Guard is not equipped for military conflicts — that is not its mission — but there are still no mechanisms for ensuring coastal protection. Whether or not a well-equipped and trained naval force is possible is not yet clear. Such a program would be expensive for a small country like Georgia, and for now it is uncertain if the U.K. or the U.S. will provide financial support.

Of all the NATO members, France and Germany have been the most reluctant to grant Georgia a Membership Action Plan (MAP), with advice and assistance that could eventually lead to NATO membership. It should be noted that their reluctance goes back to the Bucharest NATO Summit in April 2008 (even though the allies agreed that Georgia would become a member if it met all the criteria for membership). From their perspective, if Georgia were granted a MAP, then the Alliance would have to defend it against Russia, even though the country is not yet a member. The threat of Russia attacking Georgia cannot be underestimated and is very real. Jens Stoltenberg, the secretary-general of NATO, should clearly state that “Georgia is one of our closest partners but is not yet a member, and the Alliance is trying to build consensus on that issue.” As long as NATO lacks internal consensus, Georgia will not get a MAP and become a member, a scenario that only benefits Russia.

In September 2013, three NATO ships assigned to the Standing NATO Mine Counter-Measure Group Two arrived in Batumi. The Group was under the command of Cdr. Matthias Seipel of the German Navy. Then-German Defense Minister Ursula von der Leyen visited Georgia in October 2017, but Germany, unlike France, has not sold it military equipment. Germany has participated in the multinational NATO “Noble Partner” military exercises in Georgia twice though (2017 and 2018) and in the multinational “Agile Spirit” military exercise in 2021.

Even though there is collaboration, the military presence of Germany and France in support of NATO deterrence efforts in the Black Sea has been limited since this region is not a high priority for either of them. Germany focuses on the Baltic Sea, notably Lithuania, where it leads one of the four multinational allied battlegroups that includes France. As for France, its priority remains in the eastern Mediterranean.

Hungary: Maintaining a balance between Russia and Georgia

Despite Hungary’s cozy relations with Russia, it remains a staunch supporter of Georgia’s NATO integration. Foreign Minister Peter Szijjarto said during his visit to Georgia in July 2016 that “Hungary’s government strongly supported Georgia’s European and Euro-Atlantic integration path” and its bid for NATO membership. In September 2020, Defense Minister Tibor Benko reinforced Szijjarto’s statement and said that “Hungary supports Georgia’s effort towards NATO integration.” During the visit of Georgian Defense Minister Juansher Burchuladze to Budapest in November 2021, Benko said, “We will share our experience with the Georgian side on the path taken by Hungary and the Hungarian Army during NATO accession.” Although there is a feeling of brotherhood and affinity between the two countries, Hungary did not participate in either the “Noble Partner” or the “Agile Spirit” military exercises. Hungary’s words were not translated into deeds, as it is careful to maintain a balance between its close ties with Russia and its verbal support for Georgia.

Even though Georgia’s military reforms have advanced and NATO military commanders have praised the country for its efforts, a MAP for Georgia and eventual membership in NATO is not decided by the military commanders, but by the political leadership. The Alliance should strive to achieve internal consensus on this issue and in the meantime Georgia should continue to pursue both military and political reforms. Until NATO can agree, Georgia will not get a MAP and become a member — and Russia will be the only winner.

Eugene Kogan is a defense and security expert based in Tbilisi, Georgia. The views expressed here are his own.