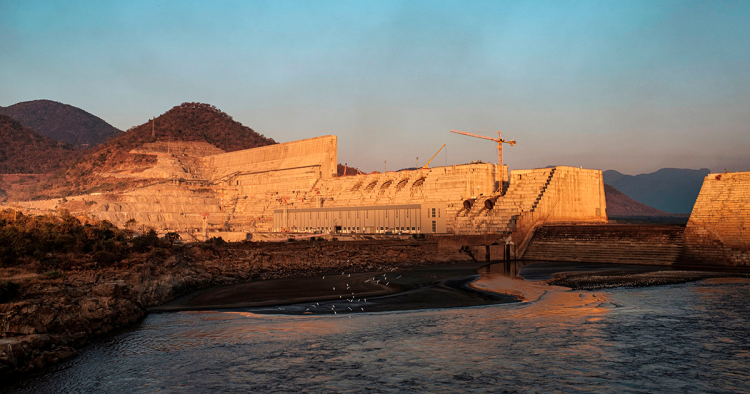 Despite great diplomatic efforts, progress on reaching a comprehensive agreement between Egypt, Ethiopia, and Sudan over the Grand Ethiopian Renaissance Dam (GERD) has remained elusive. While these states have long resorted to legal and political means to protect their share of the Nile, escalation in language from Egypt earlier this year raised the specter of military confrontation. Though direct military engagement remains unlikely, the battle over the dam is increasingly playing out in the global theater of public opinion: social media.

In the spring of 2021, Facebook identified several digital campaigns on their platform involving Egypt, Ethiopia, and Sudan related to the GERD dispute. State-backed entities in Egypt and Ethiopia were accused of sponsoring coordinated, inauthentic influence campaigns across multiple Facebook products, including Instagram and WhatsApp. These operations used a combination of fake and duplicate accounts — some of which were automated — to manipulate and influence the online public debate about the GERD.

This new evidence reveals how these states have used novel digital tactics to surreptitiously bolster their public rhetorical strategies. Paralleling official negotiations, diplomatic efforts, and public maneuvering, the cyber arena — in the form of online influence campaigns and digital attacks — has emerged as important site of conflict and competition in the GERD dispute.

Egypt and Ethiopia used online influence campaigns to complement traditional public diplomacy by targeting domestic and international audiences to shore up support, and by reframing the battle as one of nationalist pride on each side. The tactics and techniques used by these states differ in significant ways, reflecting their opposing strategic interests and negotiating positions. While as yet Sudan has not been accused of sponsoring a digital influence network related to the GERD, the country is nevertheless intimately linked with these disclosures.

In March 2021, Facebook disclosed that it had identified and removed a cluster of accounts and pages across its platform for “violating its policy of foreign interference on behalf of a foreign entity,” and concluded the campaign was likely directed by Egyptian state-backed entities. Facebook claimed it had found links between the campaign and Bee Interactive, a marketing firm based out of Egypt. Researchers have previously documented Egypt outsourcing its information operations to third-party digital marketing firms. Seventeen Facebook accounts, six pages, and three Instagram accounts were removed in connection with the network.

The campaign was especially active during the summer of 2020, coinciding with the crucial period of the first filling of the dam, which was vehemently opposed by Egypt. At this time, Egypt engaged in a flurry of diplomatic activity: Foreign Minister Sameh Shoukry urged a U.N. Security Council resolution on the GERD and Saudi Arabia and the United Arab Emirates were pressured to suspend their sprawling investments in Ethiopia to force the country to the negotiating table. Despite Egypt’s vocal opposition and diplomatic pressure, Ethiopia went ahead with the first filling.

Complementing traditional diplomacy, the network that was active during this period aimed to influence Ethiopian public opinion on the dam. Accounts and pages posed as authentic Ethiopian entities, writing in Amharic about news and political events in Ethiopia. Most importantly, content included positive opinions about the Egyptian government. One post from a page called “Free Ethiopia” included a picture of Egyptian President Abdel-Fattah el-Sisi with the caption: “Egypt does not want to impede the development of the Ethiopian people. Egypt and Ethiopia are capable of negotiating, discussion and living in peace to resolve their differences.” The post appeared on June 20, during a particularly intensive period of Egyptian public and private diplomacy on the GERD.

Sudan’s domestic audience was also targeted by this Egyptian network. The Sudanese-focused campaign included pages and accounts posing as authentic Sudanese accounts that posted about Sudanese domestic news and politics in an effort to appear as though written by genuine Sudanese authors. These pages demonstrated an intimate knowledge of local Sudanese affairs and posted in Sudanese Arabic. Content produced by the network criticized the GERD and emphasized the safety hazards the dam poses to Sudan. For example, a Facebook page titled “Pulse of Sudan” posted an image of a flooded Sudanese neighborhood with the caption: “the sudden collapse of the “Bout Dam” destroys hundreds of homes in the Blue Nile State… What if the disastrous Renaissance Dam collapses?!”

This content demonstrates a sophisticated understanding of Sudan’s chief priorities with respect to the GERD. Located just across the border, Sudan often points to safety issues posed by the proximity of the GERD — especially the potential risk of catastrophic flooding. The post, which appeared on Aug. 1, 2020, refers to heavy rains and floods that inundated Sudan in late July and early August that year. More than 100 people were killed, thousands of homes were destroyed, and the Bout Dam in the Blue Nile State collapsed due to the flooding. The network exploited this tragedy to create fear and alarm over the GERD project. Equally important, the picture used in the post was not actually taken during the 2020 floods; it is an image mined and repurposed from August 2019, during floods that occurred in the Sudanese village of Wad Ramli. Beyond the GERD dispute, this specific example demonstrates the role disinformation may play in future natural disasters caused by climate change; as these disasters become more frequent, social media may become less of a reliable source of emergency information and, instead, become increasingly weaponized by political actors.

The campaign directed at Sudan reflects Egypt’s shifting negotiating strategy. Over the past year, Egypt has pursued closer relations and coordination with Sudan: The two countries have sought to increase technical development and military cooperation. While these closer ties are not exclusively about the GERD, closer relations between Egypt and Sudan help to disrupt a longstanding pillar of Ethiopia’s position on the dam that emphasizes the importance of African unity in the dispute. Another post from the network, posted by the page “Sudan Today,” emphasized political divisions in regard to the GERD between Sudan and Ethiopia. The caption of the post read: “Ethiopia’s insistence on filing the Renaissance Dam is an ongoing violation of the law.” The caption quotes Mustafa Hussein al-Zubair, Sudan’s chief GERD negotiator, amplifying the divisions implicit in his statement and emphasizing tensions between the two states.

The techniques observed in Egypt’s campaign reflect the country’s broader strategy toward the dam: seeking closer relations with Sudan and internationalizing mediation efforts. Facebook reported that $525,000 was spent on advertisements on Facebook and Instagram to amplify the network, likely by the Egypt-based marketing firm, Bee Interactive. Egypt reportedly relies on third-party marketing firms to conduct information operations on its behalf; these firms act as a form of “influence laundering” by providing the Egyptian state distance from the operations and thus creating plausible deniability. Given the existential importance of the GERD to Egypt’s national security, the relative costs of financing the network ultimately remain low. While it is unclear whether the network successfully curried favor with its intended targets, the political and financial costs provide few incentives to abandon the policy of commissioning influence networks.

Ethiopia was also accused by Facebook in June 2021 of coordinated inauthentic behavior. Facebook’s investigation found links to Ethiopia’s Information Network Security Agency and ultimately led to the removal of 62 Facebook accounts, 26 groups, and 32 Instagram accounts for “violating [their] policy on coordinated inauthentic behavior.” As with the network originating from Egypt, the rhetorical tactics and techniques used in this campaign reflect the country’s broader strategic approach to the GERD; but, unlike Egypt, Ethiopia’s network was accused of targeting domestic audiences only.

The GERD in Ethiopia is a fierce source of national pride. With an approximately $5 billion price tag, the dam was solely financed domestically and much of that financing came from internal fundraising in the form of small donations from the population, the issuing of dam bonds, and small salary donations from employees. Ethiopia often responds to new proposals or developments on the dam with statements drenched in nationalism. For example, in September 2019, Ethiopia’s foreign ministry rejected an Egyptian proposal on the dam, claiming it was “against the sovereignty of Ethiopia.” Ethiopia has long been opposed to a legally binding international agreement with its downstream neighbors and has charged forward unilaterally throughout the decade-long dispute. Financing and geography have allowed the project to proceed without approval from its neighbors.

Similarly, the influence campaign focused only on the domestic audience in Ethiopia and was not accused by Facebook of foreign interference. This demonstrates how the rhetorical power of the dam in Ethiopia is focused exclusively inwards; there is no need for the country to interfere in its neighbor’s public opinions on the dam. For example, one post wrote: “Sudan and Egypt: you have no chance of stopping the GERD. The only option available is a negotiation that makes every concerned body a winner." Yet, this post was written in Amharic and directed inside Ethiopia, in an apparent attempt to shore up domestic support and nationalism at a time of deep division in the country. Disguised as a targeted “takedown” of Egypt and Sudan, the post is ultimately aimed at a popular audience in Ethiopia.

The disrupted network was active throughout 2020 and early 2021, a period of rapid political fragmentation in the country. As Ethiopian domestic politics became increasingly polarized, the symbolic power of the dam became ever more unifying. Fighting between the government of Ethiopia and forces in the Tigray region broke out in November 2020 and over the past year, thousands of Ethiopians have been killed, 2 million people have been displaced, and the entire country has been destabilized. The GERD, by contrast, has always been framed as a nation building project — particularly after the $5 billion bill for the dam was financed via domestic sources — and the Ethiopia government continues to use its symbolic power to unite the population. With civil war dominating the minds of Ethiopia’s political leaders, the campaign’s exclusive domestic audience reflects this deep polarization and fragmentation. While some posts connected with the network criticized Egypt’s and Sudan’s position on the GERD, most of the content was centered on Ethiopian opposition politicians and groups. The dam was instrumentalized solely as a tool within Ethiopia’s fragmented domestic politics.

The tactics of this information operation reflect Ethiopia’s broader strategy on the dam, insofar as it pursues its own interests without the need to make concessions. Addis Ababa is content to use the GERD to whip up nationalism through the use of automated info ops, without significant discouragement from social media companies. Egypt, as well, will continue to use this digital theater as a parallel track to more conventional diplomatic efforts. While Facebook has dedicated more resources to identifying and disrupting these campaigns since Russia interfered in the 2016 U.S. presidential election, significant work remains — particularly for countries in the global south. Given Facebook’s scrutiny by Congress, the company remains focused on disrupting info ops in Western countries, with few resources dedicated to fighting undue influence operations elsewhere.

Joey Shea is a Non-Resident Scholar with MEI’s Cyber Program focusing on digital information controls and operations, security, political violence, and the impact of technology across the Middle East and North Africa. The views expressed in this piece are her own.