Given capacity constraints, Algeria is no quick fix for Europe’s Russian gas concerns 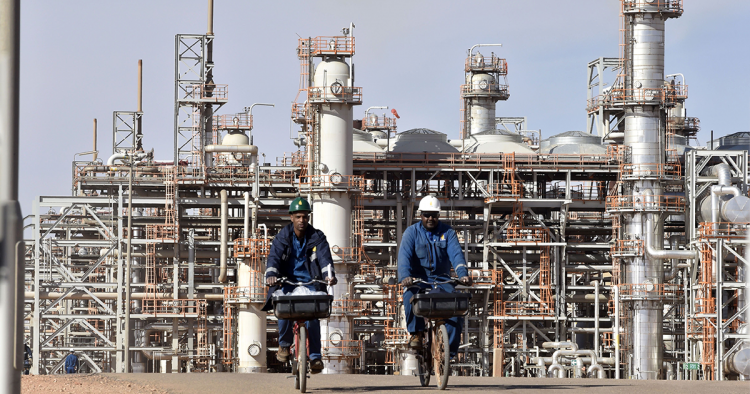 In the aftermath of the 2019 protest movement that drove out former President Abdelaziz Bouteflika and ushered in a transition — albeit one limited in scope and impact — Algeria is eager to project stability and expand its international influence, particularly around security and energy. On the latter, while Europe might be ready for more Algerian gas as it looks to diversify its suppliers, Algeria’s current production capacity limits its ability to substantially increase export volumes to Europe. As of now, any meaningful increases in Algerian production will require years of exploration and development and more crucially, further energy industry reforms to attract new investment.

The Russian invasion of Ukraine has raised questions about the future of Russian gas flows to Europe — and with that speculation about whether Algeria can increase its supply to mitigate any potential disruptions. There are currently three pipelines that connect Algeria to Europe, two of which are active. The first is the TransMed undersea pipeline to Italy. The pipeline currently carries 22 billion cubic meters (bcm) per year but has a nameplate capacity of up to 32 bcm. The second is the MedGaz undersea pipeline that connects Algeria to Spain. It has a current capacity of 8 bcm following recent increases in keeping with Sonatrach’s — Algeria’s national gas and oil company — priority of boosting the capacity of its pipelines to Europe. MedGaz’s capacity is set to increase further to 10 bcm, a fact that was highlighted during discussions with Spain in the lead up to the closure of the Maghreb-Europe gas pipeline after Morocco and Algeria failed to renew their transit contract due to ongoing diplomatic tensions. The increase initially planned for February 2022 has yet to happen. Together, however, the TransMed and MedGaz pipelines have a total capacity to transfer 42 bcm to Europe.

Algeria is Europe’s third-largest gas supplier. About 83% of its gas exports head to Europe, with Spain and Italy as the top two destinations; together they received 65% of Algeria’s gas exports in 2021. The North African country had been increasing its exports to Europe gradually over the past decade, reaching 55 bcm in 2021. The rise in exports and higher prices have helped Algeria weather economic hardship and defy dire forecasts about its economy and domestic stability. In 2021, Algeria’s gas exports — mostly through pipelines with smaller amounts in liquefied natural gas — to Europe totaled 55.2 bcm, up from 38.2 bcm in 2020 and 43 bcm the year before. But Algeria’s main challenge in increasing exports is production capacity. In a recent interview Sonatrach CEO Toufik Hakkar indicated that Algeria’s production will focus on growing domestic gas needs and current export obligations. From 2013 to 2018, according to Oxford Energy, domestic usage increased by about 10% and is projected to grow by an additional 50% by 2028.

While the government might be able to offset some of the domestic needs using renewable energy to free up gas for export, Algeria has not yet invested in renewable energy in any meaningful way. Efforts to diversify away from Algeria’s hydrocarbon industry face two key challenges. The first is that Algeria’s hydrocarbon sector remains sufficiently lucrative that other industries simply cannot compete. The second is that Algeria’s investment potential has diminished as the country’s available capital has decreased due to high domestic spending — largely on social programs — and sustained lower oil prices over much of the last decade, the recent spike notwithstanding. At the same time, Sonatrach, which manages the lion’s share of gas and oil production in the North African country, has been struggling with limited investment and marred by corruption allegations for years. While the government has sought to address some of market restrictions through a recent hydrocarbon law adopted in 2020 and a new $40 billion, four-year investment package focusing on the exploration and production of oil and gas, it is still unclear if foreign investors deem the market sufficiently attractive yet.

Hakkar also indicated in the same interview that any surplus in production will be placed on the spot market, suggesting that the quantities of gas involved may be limited. Further increases in gas supplies from Algeria — at least of any substantial amount — will require boosting the output of the producing fields, which could be producing at or near maximum capacity given the increases registered in recent years. Otherwise, Algeria is looking at years of investment in exploration and new production. In terms of unconventional or shale gas potential, some estimates place Algeria’s shale gas reserves at about 20,000 bcm — a good long-term prospect, but not something that can be tapped in time to affect Europe’s current gas supply structure. However, developing these reserves will require a substantial overhaul of the industry’s investment framework and a broader political, economic, and industry vision that has so far been absent.

In the meantime, and beyond its own reserves, Algeria is reviving plans for a trans-Saharan pipeline that would facilitate the transfer of African gas to Europe. Algeria and Morocco have dueling proposed pipelines to connect Nigerian gas to Europe. This could be a long-term opportunity for Algeria to play a leading role in helping connect Africa to Europe and beyond. But these projects face substantial challenges given the distances involved, the difficulty of reaching individual agreements with transit countries, the insecurity of these vast swaths of land, and the sheer scale of investment required. Yet, both Morocco and Algeria continue their efforts to advance these plans; despite real challenges, the two countries see an opportunity in what might not have seemed, until now, as viable paths to transport African gas to Europe.

Intissar Fakir is a senior fellow and director of MEI’s North Africa and Sahel Program. The views expressed in this piece are her own.