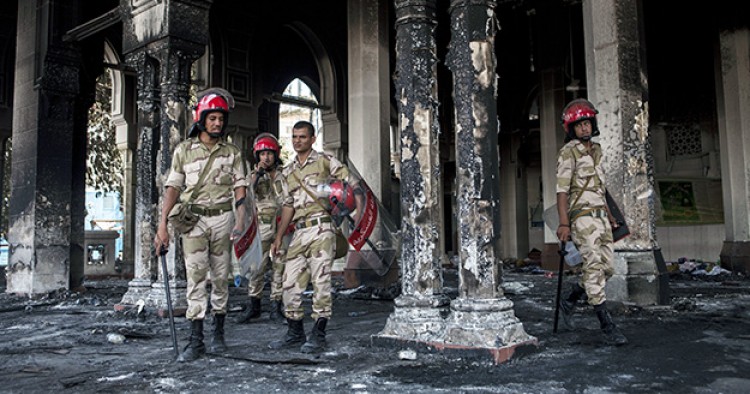 Since the inception of its transitional justice and accountability program in November 2012, the Egyptian Initiative for Personal Rights (EIPR) has faced a number of challenges related to its work. Of these, one of the most arduous has been operating in a context of ongoing political and social upheaval. The period since November 2012 can generally be divided into three distinct phases, each marking a change in EIPR’s organizational and conceptual approaches to transitional justice. Though EIPR sees its work in Egypt less in phases and more as a long and complicated struggle against injustice and impunity that will likely continue for the foreseeable future, the three phases are helpful for documenting its approach to transitional justice since 2012.

Phase one was characterized by cautious engagement with the then newly–elected government of Mohamed Morsi. As Morsi and his government constituted Egypt’s first democratically elected officials, there was tentative hope that they would be more prepared to work with civil society, particularly on issues related to accountability and impunity. It was during this time that EIPR began to formulate the ideas and approach for its transitional justice and accountability program. This early stage included consultations and direct policy advocacy with the government and the now-disbanded Shura Council (the upper house), which at the time was the country’s only legislative body.

It soon became apparent that such an approach was not feasible. The presidency and the Council showed a noticeable lack of political will to either engage in security sector reform or to establish measures of truth-telling and accountability. Soon after Morsi assumed the presidency on June 30, 2012, he issued a decree establishing a fact-finding committee to investigate acts of murder, attempted murder, and injury against protestors that had taken place in the period from January 25, 2011 to June 30, 2012.[1] Morsi’s decree referred to the committee responsible for gathering evidence as one that must “reach the truth” and determine the guilty actors and their accomplices. Though Morsi received the committee’s report in January 2013, it was never made public. A few unofficial leaks highlighted the report’s finding that the police and the armed forces were the main perpetrators of various crimes, including killings, disappearances, and sexual violence. Authorities took no noticeable action to investigate those accused.[2] The National Community for Human Rights and Law, a human rights organization, started a campaign called Warakom bel Taqrir[3] (Follow-up on the Report) aimed at applying pressure so that the committee report would come to light and action would be taken. As of January 2014, the campaign’s calls have not resulted in the release of the report.

EIPR’s approach evolved in reaction to this lack of will and to the difficulty of gaining access to necessary information. From January to June 2013, the need to “go grassroots” was clear. Faced with an unresponsive state, EIPR worked to access information and to conduct its own investigations and analyses. This strategy was intended to move investigative and truth-seeking activities away from the control of the state and toward wider society, in particular toward the biggest stakeholders of such a process, namely the victims of violence and human rights abuses. Relying on archival and oral history, the aim was to establish a “bottom-up” truth commission that could eventually be used to push for accountability when political will became available.

Egypt’s political scene, however, soon changed again with the removal of Morsi in July. The government that has replaced him is a staunchly nationalist[4] one that has also committed killings of civilians since it took power. In the midst of growing violence and repression,[5] the government is portraying this new phase as a “third transitional period”[6] requiring extraordinary measures to combat “terrorism”[7] and restore order. This discourse, however, risks turning a blind eye to state violence and continued impunity. Therefore, implementing transitional justice in the current context through the state paradigm will likely be highly politicized.

The key policy for EIPR at this time is to ensure that the process of pursuing accountability is inclusive, comprehensive, and transparent. One of the methods to do so is by guaranteeing access to information. As such, civil society organizations such as EIPR as well as independent groups and activists are trying to build an alternative narrative through different forms of documentation. The emphasis has been on collecting information, documenting violations, and providing an historical account of the revolution and its causes. Factors such as bias, insufficient financial and human resources, inaccessibility of official records, and lack of power to implement recommendations are likely to remain impediments to any such efforts. EIPR will continue to collect information in the hope that it may be used in future transitional justice processes.

EIPR has learned two key lessons since it launched the transitional justice and accountability program. First, the “transition” paradigm is a highly opaque and vague framework that can be too rigidly imposed on countries dealing with mass violence. The reality is far more complicated and fluid, constantly offering new challenges that require changing priorities, approaches, and understandings of transitional justice. This lesson undermines the notion that there is a “one-size fits all” approach to transitional justice, and instead illustrates that political struggle will contribute to local actors’ understanding of and approach to the issue. Secondly, victims and perpetrators are not fixed categories, but can change and shift according to time and context. This raises questions regarding how these categories can be represented and how such changes can be placed into a grand narrative of events since January 2011.

[6] The two previous transitional periods are commonly defined as February 11 to June 30, 2012 (under direct military rule until Morsi’s election), and from June 30, 2012 to December 2012 (when the 2012 constitution was ratified in a popular referendum).