A gradual reset with Saudi Arabia 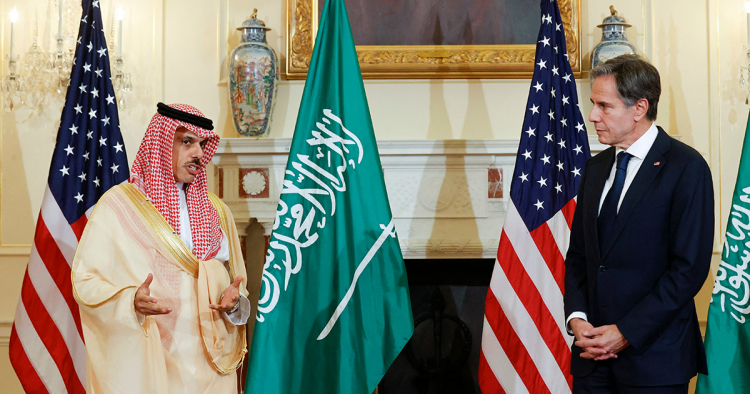 Joe Biden has a Saudi dilemma, and he’s had it since before he was even elected president.

He knows he can’t fulfill his presidential campaign promise of making the Saudis “the pariah that they are” because U.S. national interests demand otherwise. The visit last week by National Security Council Middle East coordinator Brett McGurk and State Department energy envoy Amos Hochstein to Riyadh to persuade the Saudis to pump more oil to lower global prices — which lately have spiked because of the Russia-Ukraine military crisis — is just the latest example of why the Saudi relationship matters, despite all proclamations of U.S. energy self-sufficiency (so far, Riyadh has shown little interest in accepting Washington's request).

But Biden won’t be able to induce full cooperation from the Saudis, on any issue, until he calls or meets with de-facto ruler Crown Prince Mohammed bin Salman (MBS), whom the U.S. intelligence community found guilty of ordering the heinous killing of Saudi journalist Jamal Khashoggi in the Saudi consulate in Istanbul.

Yet Biden can’t reverse course on MBS because if he does he could further divide his own cabinet on Saudi policy (it seems not everybody is on the same page with regard to how to handle the Saudi relationship). He also could alienate more members of Congress who continue to send letters of complaint to the White House about any U.S. opening or assistance to Saudi Arabia. And he could draw the ire of his progressive support base who helped to elect him.

How can Biden square that circle? How can he engage Saudi Arabia more effectively and protect U.S. strategic interests without trampling on American values and incurring considerable domestic political costs?

There is one way, and I believe it just might be the only way for the time being.

For several years, Saudi Arabia has been involved in a historic defense transformation process, which isn’t to be confused with Vision 2030, the massive program that was launched by MBS in 2016 to diversify Saudi Arabia’s oil-based economy and institute various social, religious, and educational reforms.

Though little is publicly known about this very large Saudi defense transformation plan (because the Saudi leadership has not advertised it with great fanfare, as it has with Vision 2030), it is the most serious attempt at overhauling the kingdom’s national security institutions since it was founded by the Al Saud tribe in 1932.

At least that’s the consensus among military leadership in the U.S. embassy in Riyadh and in U.S. government organizations based in Saudi Arabia, including the United States Military Training Mission (USMTM) and the U.S. Army Office of the Program Manager – Saudi Arabian National Guard (OPM-SANG).

I share that assessment based on my own four-year-long research on the goals, scope, and design of Saudi Arabia’s defense transformation plan — a research effort that included dozens of interviews with Saudi officials, Saudi-based U.S. military leadership, staffers and program managers in the Department of Defense with oversight responsibilities for this issue, and representatives of U.S. private-sector companies directly involved in the Saudi defense transformation plan. I think this transformation process, analyzed in depth in my upcoming book Rebuilding Arab Defense, is the Saudis’ own version of Goldwater-Nichols, the single most consequential and comprehensive defense reform in U.S. history, launched in 1986. It's a marathon no doubt, and it faces a plethora of serious challenges, but at least it started.

Recognizing that Riyadh’s defense course correction is an important U.S. interest, in 2018 Washington stepped in and started to offer help at the request of the Saudi authorities. U.S. defense management specialists working for the Department of Defense conducted multiple trips to Riyadh to advise on matters related to human capital development, intelligence, joint staff, acquisition, and force sustainment.

This U.S. assistance has been helpful to the Saudis as it taught them to appreciate implementation processes just as much as ideas. But it also has been incredibly modest, and it continues to face significant challenges that ironically have little to do with the Saudis.

First, the Pentagon’s leadership has not been fully enabling and closely supervising the U.S. civilian advisory role in Saudi Arabia to ensure its success. The causes are unclear, and frankly irrelevant. What’s more important to note is that absent top-level stimuli, U.S.-Saudi cooperation on defense reform will not go very far.

Second, there’s intellectual disagreement and ineffective coordination between U.S. military staff based in Saudi Arabia and American defense specialists sent from the United States to Riyadh on how to help the Saudis. This has led to the recent termination of a large part of the U.S. civilian advisory effort to the Saudis, which was offered by the Department of Defense’s Institute for Security Governance, a component of the Defense Security Cooperation Agency tasked with building the institutional capacities of partner nations.

Third, USMTM, which for decades has been mandated to conduct security cooperation with the Saudi general armed forces (not the more supposedly elite Saudi national guard), has now by default assumed the primary responsibility for helping the Saudis overhaul their defense sector. However, USMTM is equipped to handle only tactical and operational matters. It has neither the expertise nor the capacity to advise on defense institutional reform, and especially on such a large and complex Saudi project.

Effective leadership and oversight in the Pentagon over the U.S. defense advisory role in Saudi Arabia; unity of effort among American advisors (assuming U.S. defense management specialists are asked to return to Riyadh); and USMTM’s restructuring (which is long overdue) are all required to ensure Washington succeeds in helping the Saudis defend themselves against direct and indirect Iranian aggression.

However, progress toward that objective on its own will not eliminate U.S. concerns over internal and external Saudi human rights violations, which can only be addressed through a broader U.S. diplomatic toolkit. But U.S. advisory services that tackle legal issues regarding Saudi targeting in air operations can be especially helpful.

There are currently U.S. Department of Defense personnel with legal backgrounds working collaboratively with the Saudi Ministry of Defense and advising its staff on policy, military justice, administration, criminal law, and international law. I would put that particular advisory effort on steroids and probably elevate it over all others given its practical utility and heightened political importance in Washington.

Through the vehicle of defense reform, the Biden administration has an opportunity to engage the Saudis on critical national security matters while safeguarding U.S. strategic interests and honoring American values. It’s a wise form of U.S. assistance that isn’t politically controversial, doesn't cost much U.S. taxpayer money, and doesn't require a significant U.S. presence on the ground. It is perhaps the only way to reset the relationship by gradually rebuilding trust between the two sides.