The growing economic and political role of Iraq’s PMF 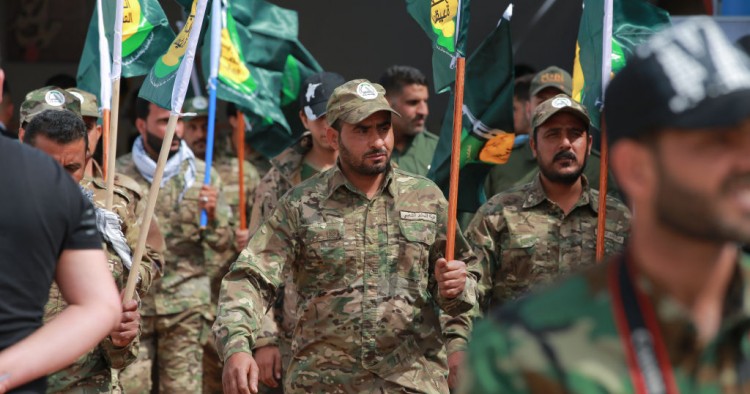 Conditions in Iraq since the defeat of ISIS’s territorial “caliphate” justify both optimism and concern at the same time. On the one hand, Iraqis are seeing a degree of normalcy that is unprecedented for the youthful majority of its population. On the other hand, there are innumerable governance, security, and economic challenges that threaten to derail the country’s progress. President Barham Salih put it succinctly when he said that Iraqis have a “precious, but precarious” window of opportunity to take Iraq to safer shores.

One issue where there has been much hand wringing but few practical suggestions for what to do is that of the popular mobilization forces (PMF).

As the main campaign against ISIS — in which volunteer PMF fighters fought bravely — drew to a close, many of the PMF’s leaders sought to translate their fighters’ battlefield sacrifices into political and economic gains. Analysts compare it to the evolution of the Islamic Revolutionary Guard Corps (IRGC) or Hezbollah from mere militias into parallel state structures.

As a military force, the PMF have become a fact of life, and big picture dynamics are conducive to their persistence. The escalation between Iran and the U.S. suggests Iran will cling closely to its Iraqi proxies. While the long-term implications of these trends are not carved in stone yet, the discussion should expand beyond military considerations to other areas where militia activities erode state authority and undermine economic recovery. PMF factions are reaching into various sectors of the economy and use their might to brush aside competition and opposition. Their involvement is broad, aggressive, and occurs at various levels. Here the Baghdad government must and can push back.

No enterprise is too big or too small. On the street level, manifestations include levying taxes at checkpoints, especially on roads to and from areas retaken from ISIS. The revenue and damage are significant. In just one town, according to a report by the London School of Economics and Political Science, militias were generating an estimated $300,000 a day from illegal taxation. There are also reports of militias cornering the scrap metal trade around Mosul, shipping it away for extra profit instead of supporting reconstruction in war-damaged Nineveh. In one high-profile scandal, the militias’ business arms were accused of being behind the negligent tourist establishment involved in the Mosul ferry tragedy.

On a higher, more official level, the PMF are extending their control over state-owned engineering and construction companies, and according to a parliamentary report, are also “interfering” in the functions of land and sea ports. The oil industry hasn’t been spared either. In 2015, militiamen looted the Baiji refinery, formerly Iraq’s largest. More recently, there have been allegations of organized oil smuggling from fields around Mosul. In Basra, militias have been smuggling fuel for a long time, and some have cornered opportunities for lucrative contracts with international oil companies.

Activities in the financial sector by PMF-affiliated entities have caused embarrassment for Iraq by violating sanctions on Iran and trafficking funds for the IRGC. In 2018 al-Bilad Islamic Bank and its chairman were designated as global terrorists by the U.S. for helping the IRGC finance Hezbollah. With sanctions intensifying, so too will the risk of PMF factions using various economic ventures to funnel revenue to the IRGC or its affiliates on its behalf to alleviate pressure on their allies.

In the halls of government, PMF leaders have used their influence on Prime Minister Adel Abdul-Mahdi and their weight in the Council of Representatives (CoR) to capture more funds. The 2019 budget allocated $2.16 billion (a fifth higher than 2018) for the PMF — that’s two and half times the budget of the Ministry of Water Resources, at a time of alternating floods and droughts, three times that of the valiant Counter Terrorism Service, and 18 times that of the Ministry of Culture, responsible for Iraq’s massive and priceless archeological heritage.

The PMF leaders’ pursuit of economic gains comes at the expense of the state and is unsustainable. It undermine rule of law, stunts the private sector, and deprives the state of revenue needed to rebuild the war-damaged economy — deepening resentment for the exploitation, as well as frustration over the government’s inability to prevent it. But what can Baghdad do?

Ahead of Iraq’s May 2018 election, I co-wrote a report to put the PMF issue in historical context and outlined approaches to containment and demobilization. Some of the recommendations remain viable. Others were rendered less attainable by unexpected political changes since the election.

Powerful PMF factions with close ties to Iran, namely the Badr Organization and Asa’ib Ahl al-Haq (AAH), morphed into the Fatih alliance, which came in second place with 48 seats. The group in turn grew to become the Binaa coalition — today one of the two poles in the CoR.

Although neither Binaa nor its counterpart, Islah, led by Muqtada al-Sadr, constituted the largest parliamentary bloc (a requirement for nominating the prime minister), the two groups reached a compromise to jointly name Abdul-Mahdi to the job. The result was a new, incomplete cabinet that lacks organic CoR support and relies on the competing Islah and Binaa blocs for survival. That competition has since focused on the important defense and interior ministries, creating a deadlock that handicaps the very institutions that enforce the will of the state. News of a preliminary agreement between Islah and Binaa leaders on the interior portfolio raised expectations of a vote in the CoR before the end of May. But that’s unlikely to happen until Sunni factions reach a deal on the defense post, to which they are entitled per Iraq’s unwritten quota rules. The latest rifts among Sunni factions will likely preclude a resolution for weeks, if not longer.

Iraqi political leaderships have no consensus vision for the future of the PMF. Opportunistic Sunni actors, like Mishan al-Jubouri, aligned themselves politically with the militia leaders. Meanwhile mainstream actors plead to Grand Ayatollah Ali al-Sistani to call for demobilization, while radical, Baath party types seek to lobby Washington for decisive military action to displace Iran’s affiliates from Baghdad.

Across the aisle, Binaa leaders naturally seek to, at a minimum, maintain the status quo or use the 2016 PMF law to siphon state resources and gain legal cover, while preventing its implementation and any attempt to bring the PMF under government control. Former Prime Minister Haider al-Abadi sought to do just that in 2018 through an order that required PMF unit commanders be graduates of the Defense Ministry’s Staff College and appointed by the prime minister himself.

The powerful Muqtada al-Sadr seems mostly concerned with weakening competition rather than supporting a state monopoly over violence. His demands had focused on taking away militias’ heavy weapons and preventing rival militia leaders from assuming political office, but he has shown no interest in disbanding his own Saraya al-Salam force.

Abdul-Mahdi’s public position reflects the premier’s political dependence on the PMF, which he proclaimed soon after his appointment to be “a great reality that cannot be ignored. … We will work together to find financial resources to support the Hashed. … Preserving the Hashed is one of our greatest duties.”

For the foreseeable future, the PMF have no reason to comply with government directives for demobilization or restraint — should the prime minister find the political will to issue any — and the state has insufficient power to conventionally enforce its will. Although government forces have grown considerably in their capability and confidence, they remain at a disadvantage, and officers and their families face assassinations and threats of torture if they cross the wrong people.

What can Baghdad do?

That said, the Baghdad government can still push to assert its authority in select, high-economic-impact areas. Using carrots and sticks, Baghdad can establish rules of acceptable conduct and prevent the militias from killing the goose that lays the golden egg.

The government’s obvious and readily available means of leverage is the budget and PMF payroll. To date, the actual size of the PMF is a mystery. A senior advisor to the Iraqi government put their total number at just over 100,000 fighters, while a senior Western official involved in security cooperation said it was closer to 82,000 than the 122,000 authorized in the 2019 budget. To give demands for good behavior teeth, the prime minister and Supreme Anti-Corruption Council should demand and oversee payroll audits. Baghdad would then reward groups that cooperate by providing undisrupted paychecks to deserving fighters, while withholding funds from those that don’t until cooperation is forthcoming. Negotiating with individual factions, rather than collectively, could preclude a unified backlash.

The threat of exposing fraud can go a long way toward persuading militia leaders to refrain from economy-destroying behavior. Exposing the embezzlement of funds meant for the fighters who put their lives on the line threatens major embarrassment and could induce foot soldiers to reconsider their allegiances. With new anti-corruption protests all but certain to erupt in the summer, a surge in public pressure for accountability could provide the prime minister with a suitable environment to take bold action.

Omar Al-Nidawi is a Middle East analyst focusing on Iraqi political, security, and energy affairs. He is a Truman national security fellow and a guest lecturer on Iraqi history and politics at the Foreign Service Institute. The views expressed in this article are his own.