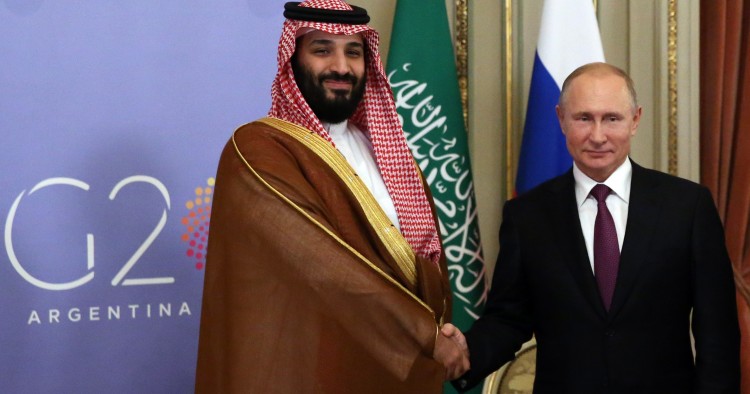 With more of their geopolitical goals aligning, ties between Riyadh and Moscow are growing closer, and the kingdom plans to invest billions of additional dollars in Russian petroleum and other projects.

One of the clearest signs that the world’s two largest crude exporters were putting their rivalry behind them came in 2017, when King Salman became the first reigning Saudi monarch to visit Russia.

Rising oil and gas prices have accelerated the Saudi-Russia detente, even though the Trump administration removed a major point of contention with the kingdom in 2018 by scrapping the Obama administration’s 2015 Iran nuclear deal. Saudi Arabia deeply resented the deal, which removed U.S. sanctions that hurt the economy and limited the geopolitical clout of its biggest regional rival.

Moscow’s pivot to the Gulf has meshed neatly with the Saudis’ decision after the nuclear deal was implemented to rely not just on their longtime strategic partner — the United States — but to hedge their bets between Washington, Moscow, and Beijing.

Although the Trump administration scrapped the Iran nuclear deal, the Saudis remain wary and have decided to continue cultivating political and economic ties with Russia and China.

An important result was that Riyadh and Moscow skirted their geopolitical differences over Iran and Syria to focus on stabilizing the price of oil, the lifeline of their two economies.

The OPEC+ deal that Saudi Arabia and Russia spearheaded has surprised the skeptics by keeping oil prices stable for two years. Moscow proved how indispensable it was to the agreement by convincing Iran and 11 non-OPEC producers to stick with the production cuts it required.

In a way, the Kremlin was reciprocating for help that Saudi Arabia had provided in 2016, when U.S. sanctions against Russia worsened an economy already reeling from low oil prices. The sanctions, which Washington imposed for Moscow’s takeover of Crimea and support for eastern Ukrainian separatists, prevented state-owned Russian energy companies from obtaining long-term financing from Western banks. To avoid becoming too dependent on Chinese money, Russia turned to the cash-rich Gulf states.

Most Gulf investments in Russia are funneled through the Russian Direct Investment Fund. Saudi Arabia’s sovereign wealth fund (SWF), known as the Public Investment Fund, has already pumped $2.5 billion into the Russian fund for joint projects. It plans to invest another $10 billion later.

The Saudi SWF, run by Crown Prince Mohammad bin Salman, is considering financing additional Russian projects in a range of sectors, including petrochemicals, power, logistics, transport infrastructure, and retail. In return, the Russian fund has pledged to line up a “significant” number of Russian buyers for Saudi Aramco shares if the oil giant goes public as part of a potential $100 billion offering.

On the flip side of the coin, the Saudis have shown interest in acquiring substantial stakes in Sibur, Russia’s largest petrochemicals operation, and Eurasia Drilling Company, its largest independent drilling concern.

Another intriguing development was Saudi Energy Minister Khalid al-Falih’s announcement that an agreement for the Saudis to acquire shares of the Russian oil and gas equipment manufacturer Novomet will be finalized this month. In conjunction with the deal, Novomet will supply the first Russian-made oil and gas equipment to Saudi Aramco and other companies in the kingdom.

Meanwhile, a partnership between Saudi Aramco, Japan’s Mitsui, and the Russian Direct Investment Fund is considering acquiring a 30 to 40 percent stake in Novatek’s $25-billion Arctic LNG-2 project. A deal would go a long way toward helping Russia achieve its ambitious goal of becoming a major competitor of Qatar and Australia, the world’s two largest liquefied natural gas exporters.

Although Saudi-Russian relations are nascent, there is no question they are growing. This may be in part because the two regimes’ tradition of authoritarianism has helped them find a common language. While stabilizing oil markets has been their major achievement, the embattled Russian economy has also benefited from Saudi investment.

The Trump administration has criticized OPEC’s production cuts, but it has been quiet about Saudi Arabia’s rapprochement with Russia. The development certainly has not gone unnoticed, however.

Although the Saudis are enjoying much warmer relations with the Trump administration than with the Obama administration, and still recognize the strategic importance of ties with the United States, they have shown no signs they will stop cozying up to the Russians. This could create a serious strain with Washington down the road.