The Gulf-backed counter-revolution in Khartoum 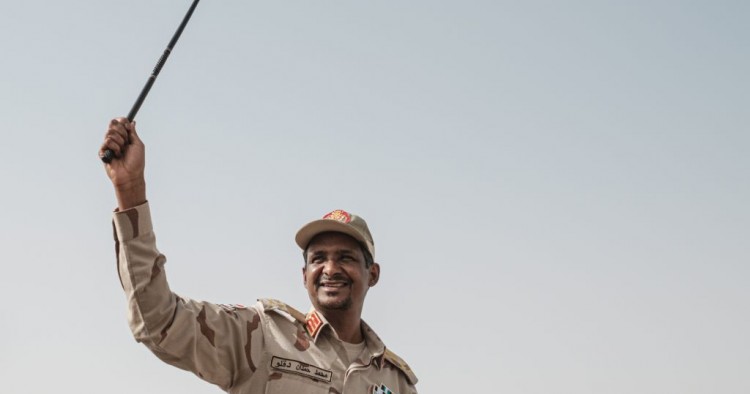 Amid Sudan’s fragile transition, the country’s cycle of revolutions and coups continues. The protestors who began calling for former President Omar al-Bashir’s ouster late last year proved strong enough to pressure the long-time authoritarian leader to step down in April, adding his name to the list of past Sudanese rulers who have relinquished power in the face of popular mobilization against them. Also evocative of the past are the protestors’ efforts to establish principles, laws, and institutions that would set Sudan on a democratic path.

Sudan’s military is once again playing a central role in the unfolding drama, preventing the people from achieving real democratic gains. In the past, protestors have needed the support of the military to depose dictators, but the military has also exploited the vacuums that followed to entrench its own power. One of the reasons why Sudan’s military rulers do not want to hand over control to a civilian-led body is the specter of accountability for corruption and other abuses. Many of the junta’s main figures fear facing a judge and an investigation into past crimes for theft of public funds and human rights violations.

One hallmark of Sudan’s most recent protests, however, has been the protestors’ fierce determination that the military not be their partner in the struggle for democratization. As a result, the military has cracked down on demonstrators, killing 100 in a violent display of state power on June 3rd. Human rights organizations have documented cases of torture and rape perpetrated by the Rapid Security Forces (RSF), a group of paramilitaries derived from the Janjaweed, militias from western Sudan, eastern Chad, and the Central African Republic formed in the 1980s that gained notoriety in the 2000s for their extensive human rights abuses in Darfur. Bashir’s backing of the Janjaweed ultimately led the International Criminal Court to issue a warrant for his arrest. Memories of these militias’ crimes resurfaced after the RSF attacked hospital staff treating the wounded, killed scores of protestors, and tossed them into the Nile River.

Some member states of the Gulf Cooperation Council (GCC) are getting involved in Sudan, using their financial means to influence the country’s future. Yet in doing so, they risk making it the Arab world’s next theater for intra-GCC rivalry, an ongoing geopolitical competition between rival ideologies that has already played out in the Levant, the Maghreb, and parts of the Horn of Africa.

The vice-president of Sudan’s ruling military junta, Mohamed Hamdan “Hemeti” Dagolo, is backed by Saudi Arabia and the UAE, both of which have a vested interest in seeing Sudan’s military regime maintain tight control of the country’s political transition. Hemeti’s visits to Riyadh, Abu Dhabi, and Cairo have underscored his close alignment with this bloc and their ties with Sudan’s new military rulers. According to Middle East Eye, the Saudis gave the green light for the June 3rd crackdown in Khartoum when Hemeti was in the kingdom meeting with Crown Prince Mohammed bin Salman.

Riyadh and Abu Dhabi have acted decisively in Sudan, driven by fear that a truly democratic revolution there could trigger popular protests in their own backyard. The Saudis and Emiratis believe that through continued support for Sudan’s Transitional Military Council (TMC), the junta will have little incentive to share power with the protestors demanding civilian rule and democratization.

As observers such as Niemat Ahmadi have mentioned, the TMC became increasingly confident after Riyadh and Abu Dhabi entered the equation and left Sudan’s military rulers convinced that Saudi and Emirati support would strengthen their position. Both Hemeti and Lieutenant General Abdel Fattah al-Burhan, the chairman of the TMC and the country’s de facto head of state, earned reputations for their roles in the brutal Darfur conflict, suggesting the level of violence the military leadership may be prepared to use against Sudan’s citizens.

It is also notable how Hemeti’s rhetoric aligns with Riyadh and Abu Dhabi’s own messaging. By emphasizing that the RSF is the only institution which can prevent Sudan from descending into chaos, his words echo the emphasis that Saudi and Emirati leaders place on the idea of achieving stability through authoritarian rule.

One of the reasons why the Saudi and Emirati leaders are so interested in the outcome in Sudan is because of Yemen, where Khartoum has played a significant role. Between 8,000 and 14,000 Sudanese forces, including mercenaries and even child soldiers, have joined the war for economic reasons. The Saudis and Emiratis have been paying them up to $10,000 to fight for the anti-Houthi coalition.

Hundreds of Sudanese have lost their lives on the battlefields of Yemen since 2015, fighting Houthi rebels on behalf of the GCC states in the Arab coalition. Sudanese leaders’ reassurance that they will continue contributing to the Saudi- and Emirati-led coalition in Yemen shows that, at least for now, Riyadh and Abu Dhabi have ensured continuity in Sudan’s position on the Yemeni civil war.

Too late to save Sudan’s revolution?

As they try to democratize their country, Sudan’s revolutionaries will find it more difficult to negotiate with the military authorities given the extent of Saudi and Emirati backing for the TMC. Additionally, the blood spilled in the Sudanese capital on June 3rd has further dimmed the prospects for military rulers and pro-democracy groups to reach an understanding. Ongoing Gulf support for the TMC could easily embolden those in power in Khartoum to continue relying on lethal force to counter the protest movement.

Hemeti is being described as another Sissi, and indeed his deep-pocketed Gulf backers would like to see Sudan follow Egypt’s path, particularly when it comes to aligning against Qatar, Turkey, and political Islam. Whereas Bashir had warm relations with Doha and Ankara, and came to power in an Islamist-backed coup in 1989, the TMC is made up of Sudanese military officials known for being at odds with the Muslim Brotherhood and on good terms with the anti-Muslim Brotherhood regimes of the Gulf and Egypt.

The RSF’s brutal attacks on activists in Khartoum and the Sudanese junta’s gradual consolidation of power suggest that the crimes committed in Darfur provide a warning about what the RSF might do to those revolutionaries who refuse to accept military rule. Nevertheless, Sudan’s unarmed protestors have not given up the fight as they look to continue their struggle for democracy.

Against the backdrop of growing pressure from foreign governments, including African Union member states as well as Western powers, for the TMC to hand power to a civilian-led body, Riyadh and Abu Dhabi risk facing greater international criticism as they remain Hemeti’s main external supporters. However, based on the Saudis and Emiratis’ records of backing autocratic regimes elsewhere in the Arab world, it would be naïve to conclude that Riyadh or Abu Dhabi would think twice about supporting Hemeti because of his past record or condemnation from human rights organizations and Western states.

Nonetheless, for Hemeti’s Gulf patrons, the cost of continuing to prop up Sudan’s government and promote the military as a driver of stability could prove burdensome. Egypt has required billions of dollars from its Gulf allies since the 2013 coup, and the decision to go all in behind Hemeti could add Sudan to the list of other Arab states (such as Bahrain and Jordan) where the Saudis and Emiratis have secured considerable influence, but at a great and open-ended cost.

For the Saudis and Emiratis, the risks are not solely financial. By emboldening Hemeti’s circle to use the tools of oppression to achieve political aims, they may end up creating new enemies, given that the Bashir regime’s use of such tactics contributed to the grievances fueling the recent protests. By becoming so invested in the security of Sudan’s junta, Riyadh and Abu Dhabi may soon find themselves in a quagmire, especially if the country slides into a protracted armed conflict or even civil war.

Furthermore, Hemeti is not devoid of agency and accepting Gulf aid does not necessarily mean that the military junta in Khartoum will remain loyal to either Abu Dhabi or Riyadh. Sudan has a history of playing its external allies and supporters off one another to advance its geopolitical and economic interests. Thus, while Saudi Arabia and the UAE are Sudan’s top Gulf patrons now, Hemeti may well seek out other partners in the future, raising the possibility that Abu Dhabi and Riyadh might be Sudan’s main external sponsors only until another, better offer comes along.

Dr. Khalid al-Jaber (@AlJaberzoon) is the Director of the MENA Center for Research in Washington, DC. The views expressed in this article are his own.

Giorgio Cafiero (@GiorgioCafiero) is the CEO of Gulf State Analytics, a Washington, DC-based geopolitical risk consultancy. The views expressed in this article are his own.