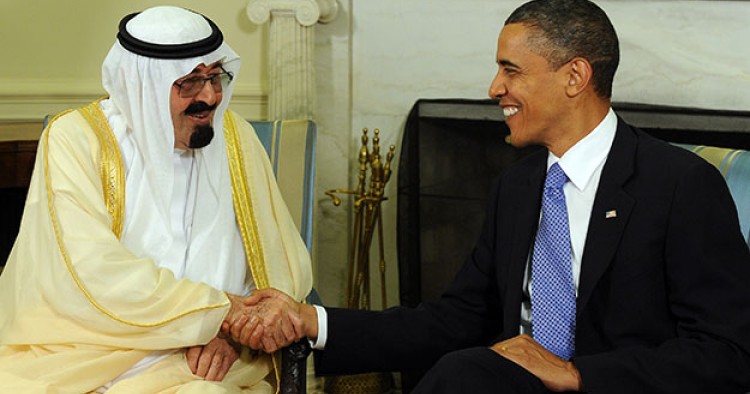 Like pieces fitting together in a jigsaw puzzle, Arab governments – presumably from the oil-rich Gulf Cooperation Council – offered to finance a U.S. military strike on Syria, according to comments made by Secretary of State John Kerry during testimony September 4 with the House Foreign Affairs Committee. In an exchange with Representative Ileana Ros-Lehtinen (R-FL) on the potential cost of U.S. military action in Syria, Kerry said,

With respect to Arab countries offering to bear costs and to assist, the answer is profoundly yes. They have. That offer is on the table. In fact, some of them have said that if the United States is prepared to go do the whole thing the way we’ve done it previously in other places, they’ll carry that cost. That’s how dedicated they are to this…They’re talking in serious ways about getting this done.

That these unnamed governments, likely Saudi Arabia, the United Arab Emirates, and Qatar, would have floated with Washington their willingness to finance military action – wholly or partially – demonstrates how closely the interests of these countries and the United States are now aligned despite other regional challenges. The three Gulf governments, along with Turkey, have taken the lead in supporting the spectrum of Syrian rebel groups fighting the al-Assad regime and for over two years have been urging the United States to become more decisively involved in the conflict. While there is already close coordination and consultation between the United States and the Gulf countries regarding actions on the ground, Gulf officials have complained bitterly about what they perceive to be woefully insufficient military assistance from Washington. With its horrific August 21 chemical attack in the Damascus suburbs, the Syrian government effectively pushed Washington to the place where the Gulf governments have been urging it to go.

Secretary Kerry reported that Saudi Arabia endorsed a U.S. strike, and that Qatar joined a statement already signed by 11 U.S. allies, including Saudi Arabia, holding al-Assad responsible for the chemical attack, following a September 8 meeting in Paris with ten senior Arab officials. Kuwait has since formally joined the statement.  Qatar’s Foreign Minister Khalid al-Attiyah said his government also was considering how it could further assist the United States. In a meeting September 10, GCC foreign ministers called on the UN to take “deterrent action” against the al-Assad government, which they hold responsible for the poison gas attack, and to protect Syrians and help them defend themselves.

And why wouldn’t the wealthy, politically engaged Gulf governments offer to defray the costs of an American strike? It wouldn’t be the first time they have done so. The Gulf states collectively funded U.S. military action during the 1990-1991 Gulf war; the United States reportedly made a profit in that conflict. That collaboration and the resulting relationship-building and joint planning, exercises, and operations ultimately led several Gulf governments to offer to host American military forces in the long term, particularly after Saudi Arabia was no longer available as of 2003. Kuwait has been particularly generous, providing base access, fuel, and other material support since its liberation from Saddam Hussein’s occupation in 1991 through the end of Operations Iraqi Freedom and New Dawn in December 2011. The future presence of U.S. military forces in Kuwait, and the Kuwaiti government’s support for them, undoubtedly will be an agenda item during President Obama and Emir Sabah al-Ahmad al-Sabah’s September 13 Oval Office meeting.

Some have questioned whether Gulf money going toward U.S. military action in Syria in some way compromises U.S. principles or objectives. But whatever the Washington debate may be about, it’s not money, even in this era of sequestration. The focus has been on the right issues – strategic objectives, exit strategy, international coalition, UN role – and has not and should not be shunted off into the blind alley of whether Gulf governments are buying influence. Washington will, or will not, take action in Syria to defend and promote U.S. interests. That Gulf states would want to assist the United States speaks to our shared strategic objectives and the comparative advantages of those involved – the United States with the world’s most advanced military, and available financing from the Gulf.

Meshing our interests is healthy, getting us back on a better path following the friction that was injected into U.S.-Gulf relations as a result of former Egyptian President Mohamed Morsi’s ouster and the Egyptian military’s crackdown on the Muslim Brotherhood. Saudi Arabia and the UAE were particularly strong backers of action taken by the Egyptian military, including with regard to the Brotherhood and its supporters. Working together on Syria helps bring the United States into closer and more productive collaboration with the Saudis and Emiratis, effectively nudging from center stage the disagreement on the approach to Egypt, at least for now.

And what of Qatar, with its outsized influence in arenas near and far? Since the late June transition of power from “Father Emir” Hamad bin Khalifa al-Thani to his son, Emir Tamim bin Hamad al-Thani, Qatar has played a less visible, lower profile role in regional affairs. Indeed, many have said that Qatar suffered two black eyes in the days following the transition – Morsi’s departure removed a close partner from the presidency of the Arab world’s largest country, and Qatar’s preferred candidate, Mustafa Sabbagh, lost a close election for president of the Syrian National Coalition. The new emir and Foreign Minister al-Attiyah may be seeking to prioritize their policies and focus on their core competencies – targeting interventions and valuing quality over quantity. In any analysis, Syria (and Egypt) rises to the top of Qatari national interests, and Qatar has a unique and potentially beneficial role to play in Syria through its contacts with rebels on the Islamist end of the spectrum. If carried out with an eye toward the rebels’ areas of control and their capabilities, the United States’ use of force in Syria has the potential to empower the more moderate center, represented by General Idris and the Free Syrian Army, and rally each of the major Gulf backers – Saudi Arabia, the UAE, and Qatar – around the FSA cause.

There are many valid points for Congress to consider as it deliberates over the president’s request to send the al-Assad regime a strong response to its inhumane use of chemical weapons against its own people. But opponents who claim that the United States does not have the backing of its Arab allies are flat wrong.