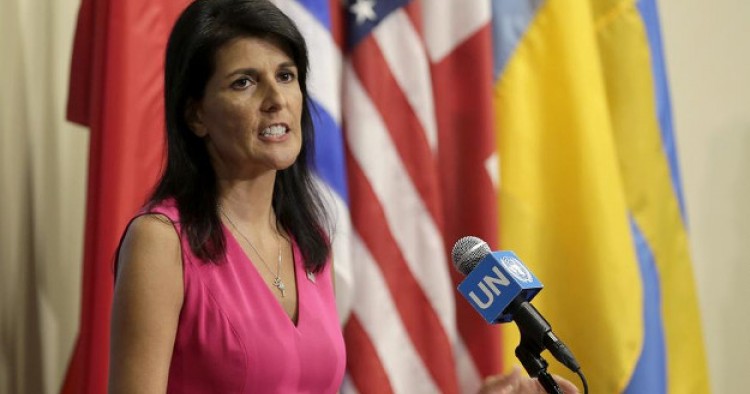 U.S. Ambassador to U.N. Nikki Haley said on Friday that the Trump administration wants inspection of Iran’s both military and non-military sites to ascertain Iran’s compliance with the Joint Comprehensive Plan of Action (J.C.P.O.A.) – the nuclear agreement Iran signed with the U.S. and five other world powers in July 2015. Haley made the remarks after returning from Vienna, where she discussed the issue with Yukiya Amano, the director-general of the International Atomic Energy Agency (I.A.E.A.). Speaking at the U.N., the top U.S. diplomat particularly focused on military sites in Iran which the I.A.E.A. has not inspected yet. "As good as the IAEA is, it can only be as good as what they are permitted to see," Haley said. "There are also numerous undeclared sites that have not been inspected yet," Haley said. "That's a problem." She continued: "I have good confidence in the IAEA, but they are dealing with a country that has a clear history of lying and pursuing covert nuclear programs.”

Comment: Haley’s comments about the need to inspect Iranian military sites are set to further heighten tension between Washington and Tehran. Iranian leaders have ruled out giving international inspectors access to their sensitive military sites. “They (inspectors) would not dare to come to Iran, and will not get access to the military centers at all, because they are part of the Islamic Republic of Iran’s security sphere,” Ali Akbar Velayati, an aide to Supreme Leader Ali Khamenei and the head of the Strategic Research Center of Iran’s Expediency Council, said on August 5. The former Iranian foreign minister added that the United States is no longer a world super power to dictate its wishes on other nations. His comments came after the Associated Press reported that the Trump administration was pushing for inspections of Iranian military sites to test the usefulness of the nuclear deal Tehran signed with the United States and five other world powers two years ago.

On Wednesday, Iran’s Foreign Minister Javad Zarif also warned that Haley’s visit to Vienna was aimed at undermining the Joint Comprehensive Plan of Action (J.C.P.O.A.) – the nuclear deal Iran signed with world powers two years ago. In a letter to International Atomic Energy Agency (I.A.E.A.) Director-General Yukiya Amano, Zarif asked the international watchdog not to disclose any sensitive and secretive information about Iran’s nuclear activities to Haley or any other third party. Fars News Agency published full text of the letter today.

“While U.S. officials are free to visit Vienna or anywhere else and the Agency also has the right to meet with difference individuals, the purpose of this visit as publicized raises serious concerns regarding further violation of the text and spirit of J.C.P.O.A. and U.N. Security Council Resolution 2231. This time, it could also undermine the credibility of the Agency, which is of vital significance to the non-proliferation regime in general and to J.C.P.O.A. in particular,” the letter said. At the end, Zarif expressed confidence that Amano and his team will “deal with this trip and any other similar attempt with professionalism and sincerity.”